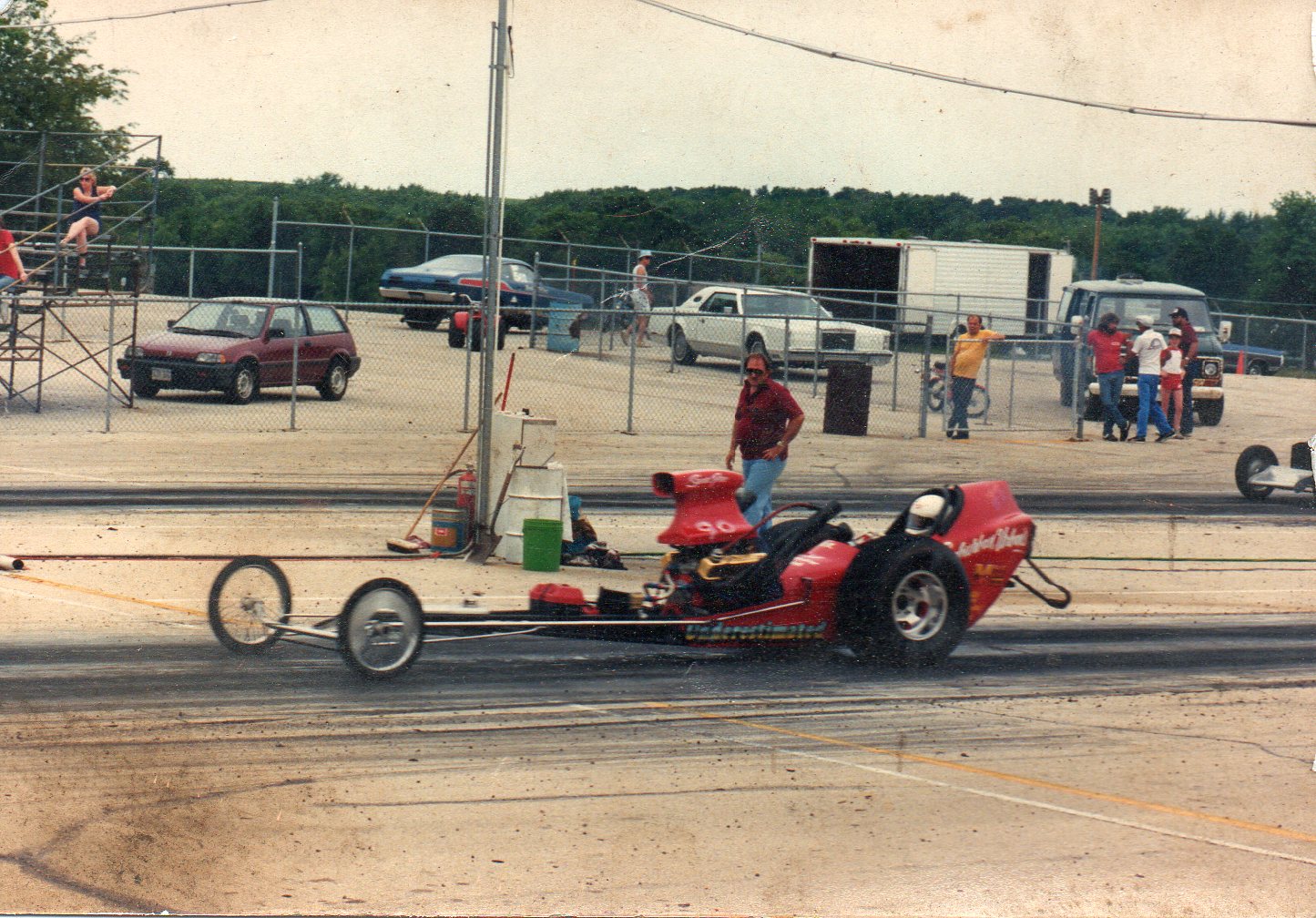 (Words and photos by Greg Rourke) – Once upon a time index and bracket racing wasn’t dominated by rear engine dragsters with throttle stops and enough electronics to operate a small nuclear power plant. My one and only attempt at drag racing involved a front engine dragster in the mid 80’s.  Not many folks bracket raced dragsters back then.

Scott Anderson is a long time friend and gearhead. We decided we wanted to go drag racing, and started collecting parts with whatever spare money we could scrape together. We started with a 1968 Nova rolling body, but the more we looked at it the more work it needed. We  found a bare front engine dragster chassis, it was absolutely nothing but the tubing. It was going to cost more than we had when we started adding up everything.  Scott had recently gotten married and  his wife offered to let him use wedding gift money to buy a front engine dragster and trailer, missing only the engine and trans. Now we’re getting somewhere.

This car was beautiful. It had the shark style body popular in the mid 60’s. The seat upholstery had the seahorse logo stitched in it, that meant Tony Nancy did it. I traced the chassis tag to John Shoemaker, a California chassis builder. I contacted him and described the car, he confirmed it was one he built for AA/FD. I asked about the unique construction, the front came to a point, with a single quarter elliptic spring to the axle. He was shocked it was still around. He said he built about 10 of them, several crashed right away. He thought the rest had been front-halved to a conventional torsion bar set up. He warned us the car would handle poorly. It did. We found a picture in a magazine of one of these chassis running over a crew man on the burnout. We proceeded anyway. 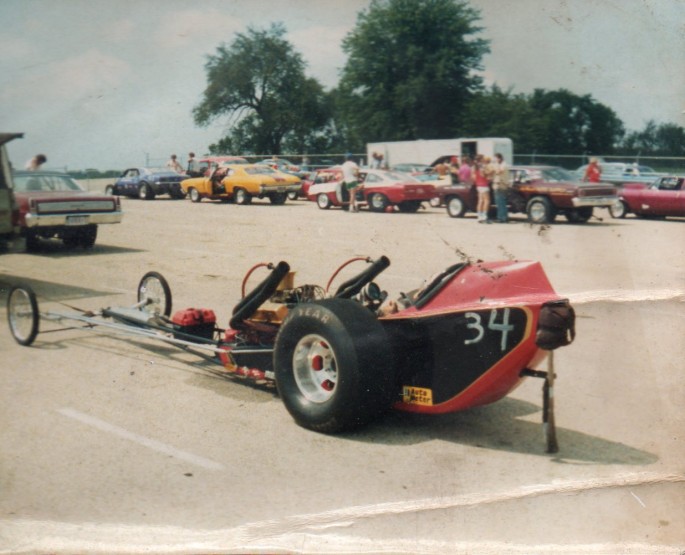 We started collecting parts. A high school friend had a 331 inch small block Chevy long block. Double hump heads, 12:1 compression, and a cam that worked well with it’s previous tunnel ram intake. Spark plugs had to be indexed to prevent contact with the pistons. We rounded up an ancient Accel dual point distributer, a Weiand dual plane intake and a brand new Holley 600 double pumper. The tabs for motor mounts meant we needed a shorty Glide for a trans. As the transmission sits between the drivers feet we knew this was one area to not scrimp on. A pro built us one from a Corvette core, but his torque converters were out of our budget. A speed shop had taken a deposit on a 12 inch converter and the guy never picked it up, so we got it for the balance owed. We knew it was way less than ideal, just add it to the long list of things we’d upgrade later.

We both lived in apartments, no garages. We parked it wherever someone would let us while we worked on it. We towed it with my 1973 Chevy half ton pickup on the homemade single axle trailer. I welded a barbell to the tongue and stacked weights on it so it had enough tongue weight to not sway.

Since the beginning of this enterprise it was decided Scott would drive and I would wrench. I was a mechanic and had no interest in driving, and in this case I literally didn’t fit in the car. I finally got the car running, Scott bought a driving suit and helmet, and we waited til spring. 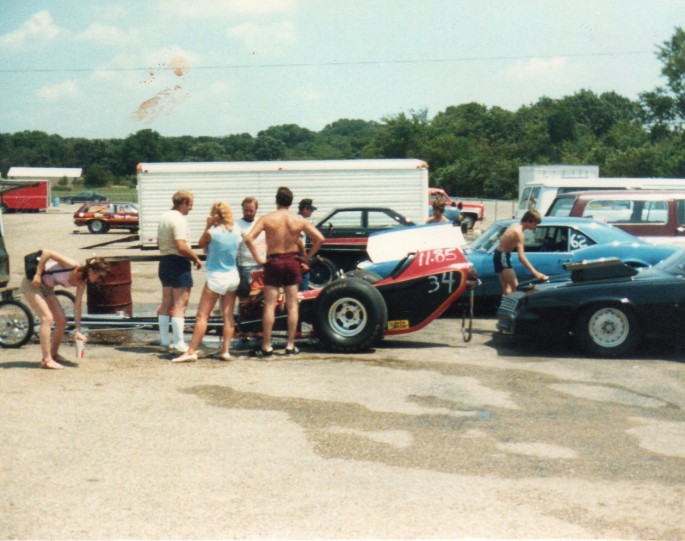 Our first trip to the track showed us we had NO idea what we were doing. We towed into the lanes, with several lanes ahead of us. But they called our lane out of order, Scott wasn’t suited up or in the car. He gets suited and his helmet on and gets in the car. We both realized at the same time we never practiced getting him belted in, and he was also sitting on the crotch strap of the five point harness. If you’ve never looked in the cockpit of dragster, the driver legs go over the axle tubes, with his junk crammed against the back of the diff. So now I have to jam my hand between the rear end and Scott’s family jewels to try to fish out the belt.  He motions for me to put my ear near his visor and tells me “I’m  giving you 15 minutes to quit that”.

We have no cooling system or charging system. We fire the car and attempt a burnout, but it bogs. Scott stages the car for the first run. It launches hard and gets 45 degrees to the guardrail. Scott doesn’t lift and overcorrects and now he’s 45 degrees the other way, but then get’s it straight. At half track the coupler between the rear and the trans tears out the tailshaft seal and we oil the track real good. Back on the trailer.

We get it fixed and we’re back at the track next week. Things go a little better, but the car still launches all crossed up, just as Shoemaker said it would. Scott determines as long as he doesn’t lift he’ll be okay. If he lifted, he theorizes, the car will snap the wheel straight and it will go wherever it’s pointed. This would prove to be true as we later found out. We ran a low 10 second pass once, then could barely get under a 12. Yes, that’s an 11.85 dial in on the car. I was lost.  I couldn’t make it run right, fooling with jets and fuel pressure seemed to do nothing. It would only run a few minutes with the water in the block before it got too hot so it wasn’t like we could drive it around the block. The parachute that we didn’t know how to pack remained unused. 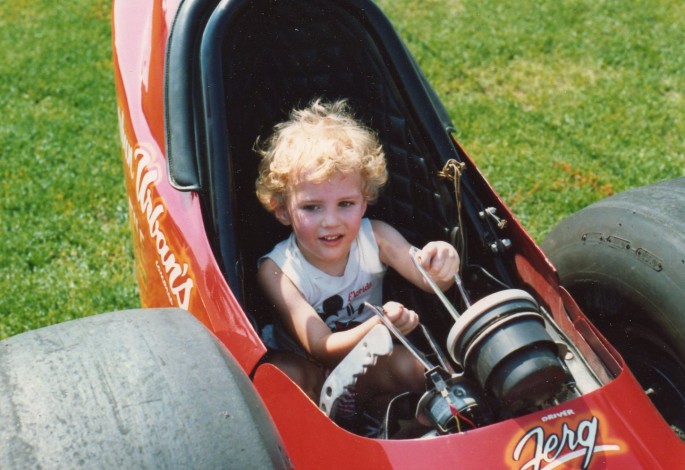 We raced at Byron Dragway, and several times we broke everything but the trailer. Ron Leek, the legendary owner, would often refund our entry fees, he said he didn’t want us to get discouraged.

We amused ourselves with a few car shows. At one we showed up and were told “no trailered cars”. No prob, we went down the block, unloaded, and Scott fired it up and drove it in. We knew what they meant but they let us in anyway.

We tried Great Lakes Dragaway once. The starter ran over with the slash-across-the-throat gesture meaning shut it off.  I went to the tower to find out what the problem was. The starter ran up the steps and said “I told you assholes to never bring this car back here after you ran over the Christmas tree.”  At first it was still lettered for the previous owner, and had an airbrushed spider web and “Black Widow” on the cowl. We convinced them we were new owners and they gave us one chance to get down the track. Apparently the previous owner lifted when the car got sideways and he drove over the tree.

My final attempt at drag racing was exactly one week before my first son was born. That’s him sitting in the car after I was no longer involved with it. He’s a banker now, but enjoys going to the track once in a while. He shot photos with me at the Meltdown Drags in 2015.

Scott later sold the car, I don’t know where it is now. Scott is now crew chief on the Frantic Fueler nostalgia dragster, as well as owner and crew chief of the Anderson Family A/FD rear engine dragster. I would like another chance at making that car run right, but other than that I don’t miss it. It was fun while it lasted. 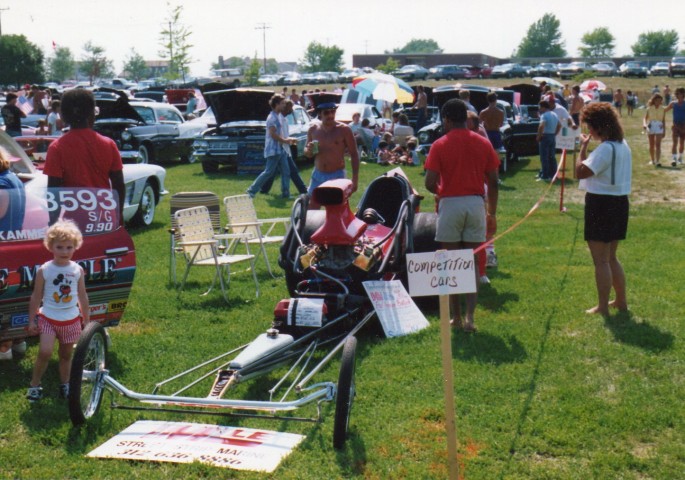