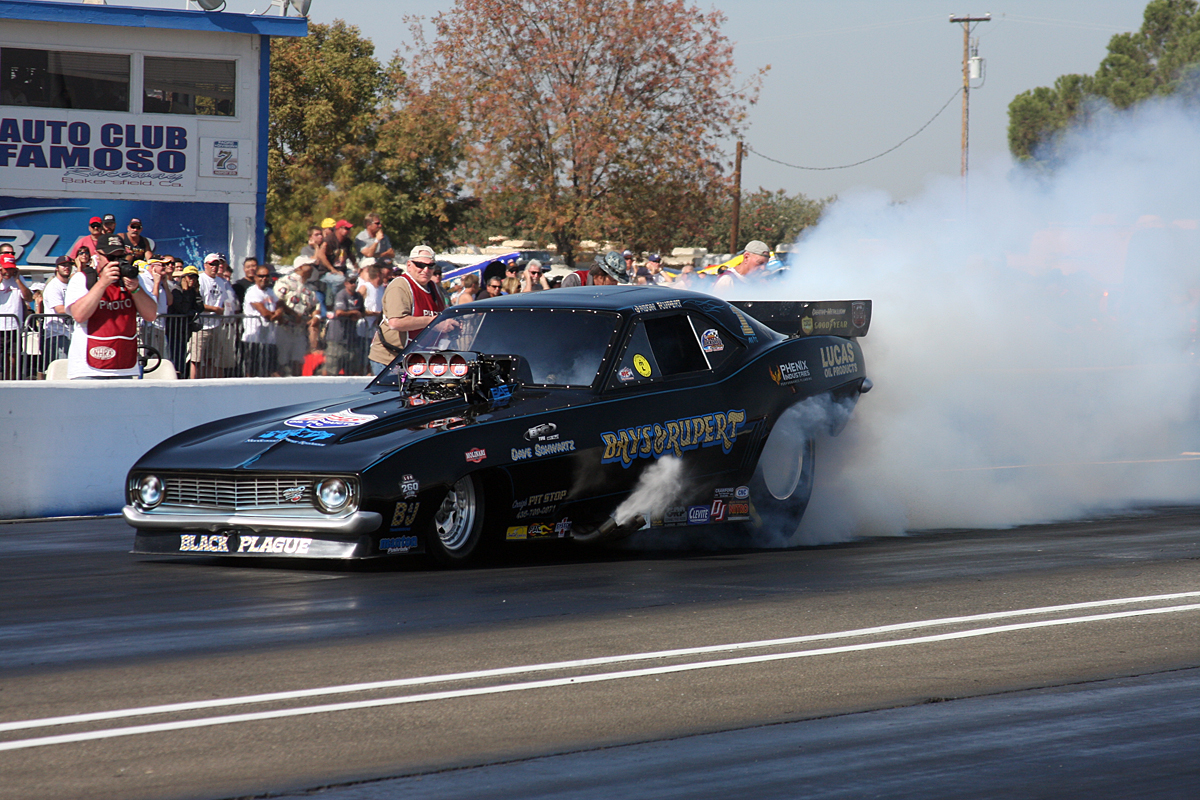 It was an intense day of good old fashioned Sunday drag racing at the 2013 NHRA California Hot Rod Reunion as series champions were crowned, family legacies were added to, and consistent performances were awarded with hardware and cash in the winners circle. Texan John Hale recorded the win in the hotly contested nostalgia funny car category during a wild weekend where his firs qualifying pass was disallowed due to a fuel pump issue. He thundered back into the field during the second session and then waded through John Powers in round one, 2012 CHRR winner Mike Lewis in the second round, and Jason Rupert in the semi-final round. In the finals he faced off against Dan Horan who had been slaying ’em all day. Hale and Horan left with identical reaction times but it was Hale who made it to the stripe first, garnering the win light. Ironically, the team of Jason Rupert that tasted defeat at the hands of Hale in semi-final round were depending on him to dispatch Horan in the final. Why? If Horan won the final round, he would be the 2013 Hertiage Series funny car champ but if he lost, it would go to Rupert. The starting line celebration was wild as a massive crowed of crew people, onlookers, and passers by gathered behind the Hale car as it rocketed down the course. When the dust settled, Jason Rupert had collected his third NHRA Heritage Series title.

The action in top fuel was equally as intense and the final round produced one of the most heart stopping and dramatic finishes we have ever seen at a drag race. Denver Schutz and Adam Sorokin had the two best running hot rods in the category all weekend. Schutz put the car in the field on his first qualifying pass and sat out the second session, holding onto his number one qualified position anyway. Sorokin entered eliminations as the number six qualifier in his awesome small block Chevy powered slingshot that features a unique enclosed driver’s area. Schutz had a bye in round one due to an odd number of cars, he defeated Bill Dunlap in round two and then Brett Harris in the semi finals to earn his berth in the final sprint. On the other side of the ladder, Sorokin and his mouse motored steed dropped Jim Young, Rick White, and Rick McGee to set up the hemi/small block final round. Interestingly, both Schutz and Sorokin had run 5.671 in the second round, so their machines were certainly on the level with respect to performance. In the final round, Sorokin strapped a big hole shot on Schutz to the tune of more than a tenth of a second. At about 800′ Sorokin’s car started eating itself up, shooting pieces of molten alumimum out of the headers. All the while, Schutz was making up ground rapidly. At 1,000 feet the engine in Sorokin’s car violently exploded. At the same time, Schutz’s car was rapidly approaching the center line (situated to his right). In a death defying twist, Schutz’s car entered Sorokin’s lane, passed him and then wiped out the finish line timing blocks. Wildly, Schutz’s car triggered the timing lights in Sorokin’s lane! There was less than a couple of feet between the cars at more than 200 miles per hour. Had Sorokin’s engine not exploded, the two cars would have ended up a grisly, tangled mess. Of course, the Sorokin family has long held Famoso as a special place. Adam’s dad Mike was the driver for the legendary Surfers team and they captured the March Meet title (and lots more wins) back in 1966. He was a proud man in the winner’s circle, accepting his trophy and celebrating his first CHRR win.

Jim Murphy who was eliminated in second round earned enough points with that appearance to capture his first NHRA Heritage Series top fuel title. Murphy has been drag racing all different types of cars for decades. Known back in the day for his “Holy Smokes” funny car and the many years he’s wheeled front engine top fuel dragsters, this was a well deserved honor for a man who has been one of the great bedrock supporters of nostalgia drag racing since the whole front motor top fuel craze exploded in the 1990s. We send our congrats to Murphy and crew!

In pro modified action, Ramona, California’s Dan Myers thundered his really nice 1969 Camaro to a CHRR victory over a stout field  of pro mods. Myers laid the lumber to John Scalpi in the first round, Jeremy Hanger in the second, and Marc Meadors in the third. While there were some hero runs into the 5.70s, Myers 5.90’d ’em all to death at Famoso. Running what was the most consistent (if not the quickest/fastest) in the field paid off for Myers and crew because they simply did not falter where some of the more aggressive cars did. The display over the course of the weekend sure did wonders to adjust our belief that the stout cars lived east of the Mississippi river. This was some really fast iron and they put on one hell of a show for the throngs at Famoso. Congrats to Dan Myers, he and his crew earned it! (Plus, Chad was visibly drooling every time the Camaro went by!)

A HEARTY CONGRATS TO THE RACE AND SERIES CHAMPIONS! IT WAS A FANTASTIC WEEKEND OF COMPETITION AND EXCITEMENT! 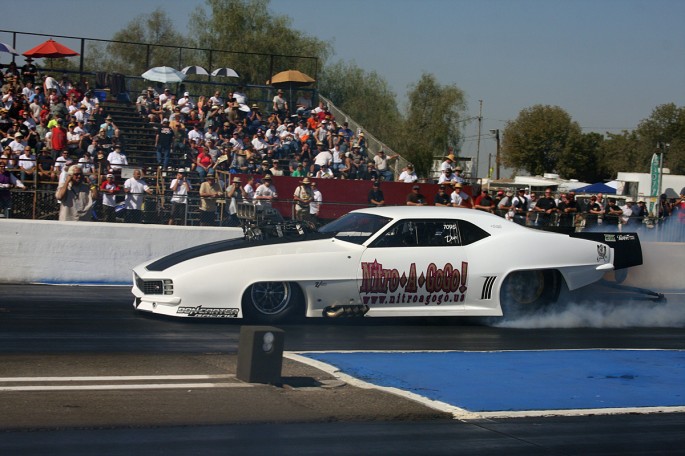 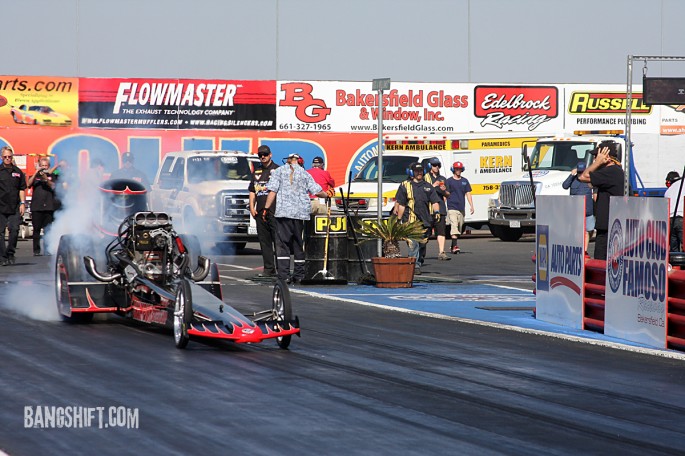 Video: Dave Wallace Jr. Takes A "Ride" In The Doss, Clayton, and King 1963 Top Fuel Dragster BangShift Question Of The Day: Would You Rather Drive A Fuel Altered, A Pro Mod, Or A Nostalgia Funny Car?