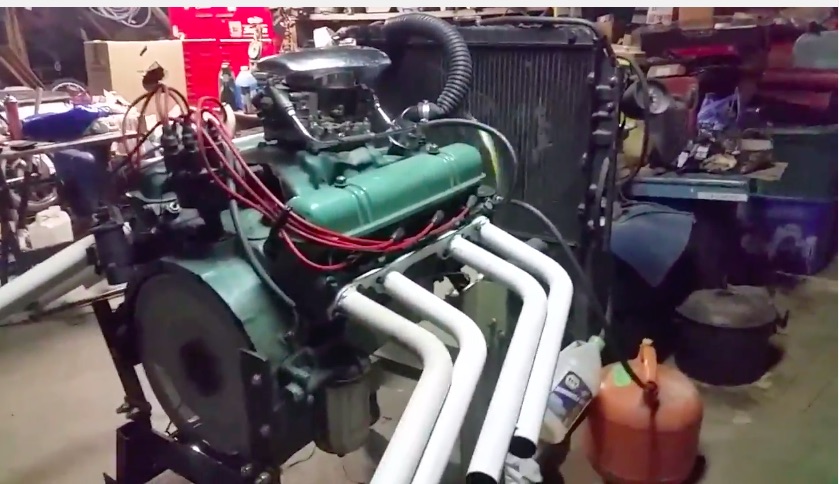 The little Buick 322ci engine was the second smallest (preceded by the tiny 264ci version) in a line of engines that Buick introduced during the 1953 model year. The Fireball V8 had many of the same design features that were seen in other engines like a hydraulic cam in the block, five main bearings, cylinder banks at a 90-degree angle, and inline overhead valves. The combustion chamber was a bit of a departure from the norm. Yes, it was a wedge chamber but there were elements of a hemi style chamber used as well. A centrally located spark plug and domed pistons were also fairly unique to the 322 at the time of its introduction. The initial bore and stroke combo of this engine was 4.00 x 3.20 and it used a forged crank and rods.

This being said that was one thing that defined these engines in all of their various Buick forms and that of course was the valve angle. The valves were at a 45-degree angle in relation to the axis of the cylinder they were feeding and evacuating. They were also little. A 1.75-inch intake and a 1.25-inch exhaust were in charge of getting the gasses in and out and while we do not know who named the engine the Nailhead, it has stuck for all these years.

The 322ci version of the Nailhead was made from 1953-1957 and it was first rated at 143hp and then 150hp and by the time 1957 came around there were 255hp versions of the 322ci out there in cars like the Roadmaster, the Century, and the Super. The 364 and then 401ci versions of the engine follow and with their increased displacement they made more power and helped to move the ever larger and heavier Buicks that they were producing down the road.

The 322 is still a popular engine in hot rods and period style custom builds. No, it will never been a hemi in terms of its ability to make horsepower but it is a torquey little engine that is fun to drive and when put in a light car will make you smile. I really, really like Nailheads. I think they are cool and as history has shown, they hung in there longer than most people thought they would in terms of relevant performance.

While the 264 launched the whole program, the 322 really put the Nailhead on the map.  Now watch ’em shine below.

Meziere Enterprises Bottle Clamps For Variety Of Racing Applications Is Lancia Coming Back To The USA? It Sure Seems Like It - What Models Will They Bring?

One thought on “Happy 3/22! Today’s The Day We Celebrate The Little 322ci Buick Nailhead V8 Engine”