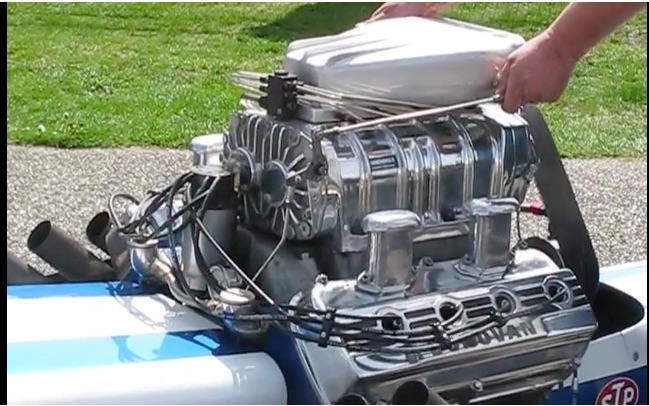 The world of drag racing changed forever when a former engineer and machinist from Offenhauser laid his hands on a game-changing invention. That creation was the awesome and revolutionary 417ci Donovan Hemi. Ed Donovan was the brains behind the operation and the engine came to be because the sport desperately needed it. Prior to the creation of the Donovan 417 there was not a dedicated racing block for use by drag racers in the nitro burning ranks. They were rapidly depleting the world’s supply of 392ci hemi engines and were getting started on wiping out the 426s as well. Through his years as a drag racer, Donovan knew the sport, knew the stresses of the destructive fuel, and knew that the 392 hemi was the toughest son of a bitch the world had ever seen in terms of a factory engine. He needed to make it better for the racers…and he did.

The first Donovan that found its way into a race car was loaded into the front of “Kansas John” Wiebe’s slingshot fuel car and in its first appearance the thing reset the national record. Blessed with less weight and likely about 100 more horsepower just due to the design of the engine, the car hauled the mail and made immediate believers out of a skeptical drag racing world. The aluminum engine was designed with the stuff that racers needed. There was the bomb proof bottom end, there was the fact that it readily accepted all the market’s existing 392 hot rod parts, and it was built to live on the road. What does that mean?

Prior to the invention of the Donovan 417, if you screwed up a cylinder you either had to find a machinist to fix it in the middle of nowhere, ship the thing to someone, or most likely, chuck the motor into the scrap pile. The Donovan was a wet sleeve engine and the sleeves could be removed and replaced easily. Screw up a hole? No machining necessary, just blast a new sleeve in there and be on your way. Need to get it repaired? It’s aluminum, you could weld on it. The thing changed the sport because they made more power, could withstand loads more stress than a factory block and were adopted by many racers quickly.

Ed Donovan believed that the 392 was the pinnacle of nitro engine perfection. While his design was supplanted by 426ci Hemi platforms from the likes of Keith Black, Joe Pisano, and others, the Donovan block is still used all over the place in nostalgia racing. There’s even a billet version these days and the videos below talk more about it.

No, the 417 is not a production engine but it was one of the most significant developments in drag racing history!

The OPGI Spring Summer Series Car Shows Are Coming! Here's How To Be A Part! This 1974 Ford F-600 Rollback Truck Is Glorious! Anyone Need A Neat Car Hauler?