Incredible: Jianna Salinas’ NHRA Finals Victory Was Among The Most Improbably Awesome In History (Video) 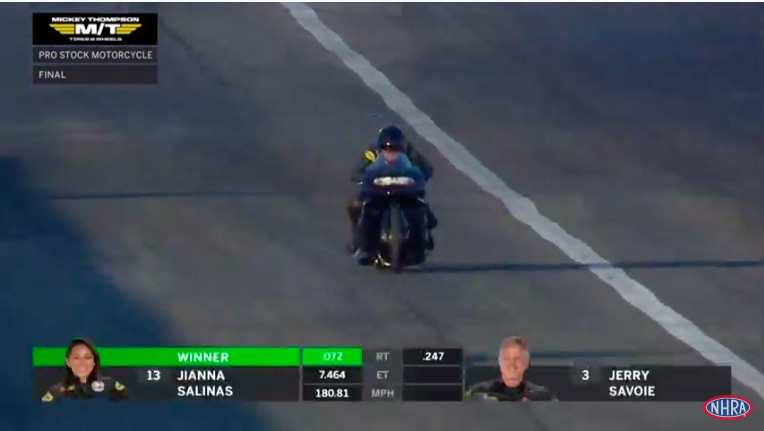 There are ways to get your first win and then there’s how Jianna Salinas did it at the 2019 NHRA Finals. Not only was it her first win, it was on a deciding pass for the world championship of the category in the final round, a race that many people did not think that she could win because her opponent Jerry Savoie had been on top of a quicker and faster machine all day long.

First, a note on Jianna. She is a study in professionalism, a study in toughness, guts, and determination. She has been working really hard to get better on her motorcycle, she has come back from a scary wreck in Chicago, and she continues to get better and better on the starting line. Last weekend was the payoff for her hard work and her perseverance. In the first round, during a moment that was slated to be a coronation for the seemingly pre-ordained 2019 champion Andrew Hines, Salinas was in the other lane. Hines moved his motorcycle slightly backward after staging and red lit at the starting line. She advanced.

In the second round Steve Johnson had problems and sat up on his motorcycle. Jianna ripped to the win. In the semi-finals Matt Smith blew up and engine in the other lane after Salinas had tree’d the daylights out of him. Andrew was supposed to walk off with the championship and when he lost Matt Smith was supposed to have won the race and the title, and when he lost, Jerry Savoie was going to become the most accidental champ in pro stock motorcycle history. Except he wasn’t. Coming out of the burnout, the motorcycle lost fire and it was obvious that something was wrong.

Tough Ride: This Look Back At The Wreck Frank Soldridge Had In His ProLine Powered Mustang At Sweet 16 Is Hardcore Million Dollar Baby: This Ferrari 250 GTE/GTO Reconstruction Is An Interesting Piece Of History

3 thoughts on “Incredible: Jianna Salinas’ NHRA Finals Victory Was Among The Most Improbably Awesome In History (Video)”