Joey Severance’s Wild Save At The NHRA Dallas Event Needs To Be Seen To Be Believed! (Video) 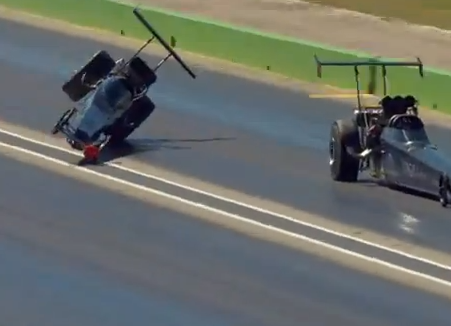 This here is some absolutely wild video that ends happily, against all odds. The dude you’ll see go on one of the craziest non-crashing passes in top alcohol dragster history is Joey Severance. He was running at the Texas Motorplex in 2013 during the AAA Fall Nationals NHRA event that the facility hosted. On the run you will see in the video below, Severance’s dragster leaked oil onto one of its rear tires causing it to slide completely out of shape and sideways, actually crossing the center line and getting completely sideways at a very high rate of speed.

As the dragster slides sideways it also manages to get up on two wheels and reach a degree of lean while on two wheels that we have never seen another dragster recover from. You will be blown away when you watch the slow motion replay of this whole scene happening and just how far gone Joey’s car was before he was able to wrassle it back onto two wheels. What’s that, you say? We think he had a hand in saving this thing? Hell yeah we do and the slow motion replay proves it.

When the car is up on two wheels and sliding sideways, you can see him (by watching the front wheels) making steering inputs and trying to get the car back onto all four. Ultimately he is successful, lands, and rolls gingerly down through the shutdown area. After all that, about the only damage was some scuffing on the sidewalls of the front and rear tires!

PRESS PLAY BELOW TO SEE ONE OF THE MOST EPIC ALKY DRAGSTER SAVES OF ALL TIME!

King Of Italy Ultra4 Footage From Our Friends At Busted Knuckle Films - All The Fun Of Rally With The Punishment Of True Off-Road! RideTech Father's Day Contest! ENTER TODAY And Your Dad Can Win Some Sweet Shocks! HURRY!

2 thoughts on “Joey Severance’s Wild Save At The NHRA Dallas Event Needs To Be Seen To Be Believed! (Video)”