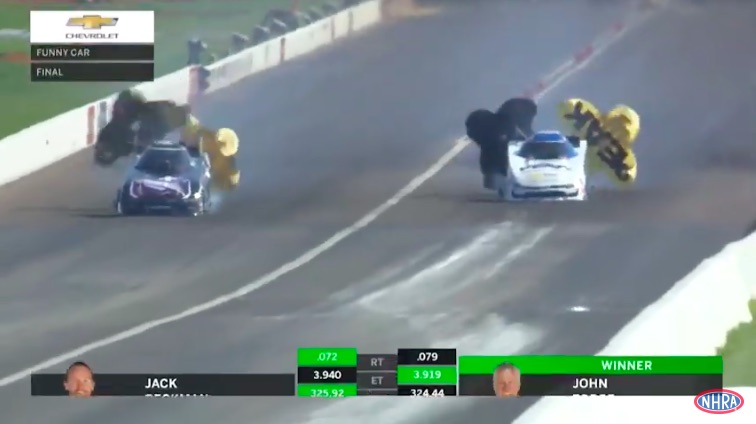 It was a Chevrolet Performance US Nationals for the books last week as the world of NHRA drag racing went back, for the 65th time to its roots at the biggest race of the year. Weather and on-track delays threw the schedule for sportsman competition for a loop and saw those competitors racing well into the night on Monday. The professional racers had five rounds of qualifying in order to set their fields and eliminations were absolutely awesome.

Below you will see the four final rounds from the Mello Mello series categories in NHRA drag racing. All four of them have a unique story to tell. For Jerry Savoie, there’s his matchup with Andrew Hines which is literally over before the tree fires because of a tiny flinch on Hines’ part. A red light? Not exactly, it’s weird and its the type of thing that happens during a final at the most pressure packed race of the year.

In pro stock, a stunning turn of events sent Erica Enders to the top end behind Alex Laughlin, the winner. She left on Laughlin by a mile but a transmission problem did not allow for a smooth gear change early in the run and that allowed Laughlin to come by. The whole thing was so freaking insane to see in person.

In top fuel, Doug Kalitta finally broke through his Indy curse and won the event for the first time. It was awesome to see this incredibly gifted driver achieve this monumental step in his career. We’ll see if Kalitta and crew can translate this success into a championship run over the next few weeks in the NHRA Countdown to the Championship.

Finally, nitro funny car. John Force has the best car in the category right now and more than a few of us were picking him to win the race before it started. He delivered behind the wheel and crew chief Brian Corradi delivered a tune-up that saw the quickest run of the whole event being made during round on one Monday morning.

Yes, this was a BIG GO to remember!

Video: Watch Chad Green's Horrendous Ride At The 2019 Chevrolet Performance US Nationals BangShift Question Of The Day: How Far Do You Dare Trespass Into "Not Street Legal"?