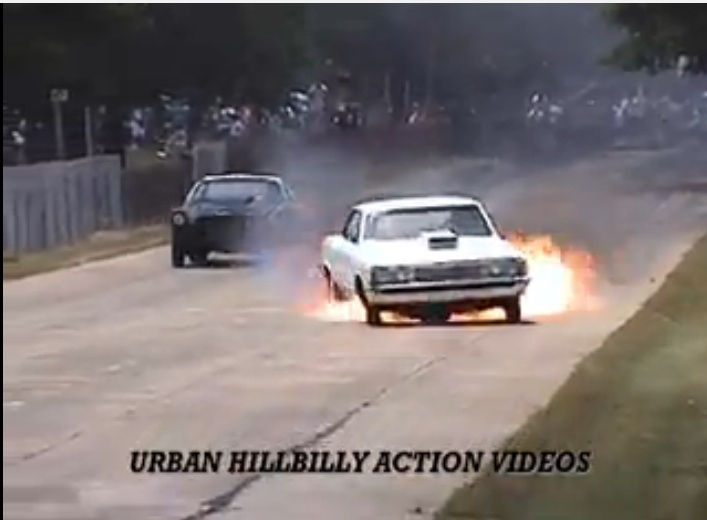 There’s a part of George Ray’s Wildcat Dragstrip that we love. The idea that you can show up and race any damned thing you want with any level of safety equipment you want without anyone hassling you is appealing to any hot rodder. The downside of this idea is what you will see here and while the driver does not get hurt, he damed sure could of while wearing his t-shirt, shorts, sneakers, and no helmet. We’ve talked in the past about drag strips that give the illusion of safety with fire trucks or ambulances on their property that don’t actually run. George Ray’s is nothing like that. You know that you’re on your own the second the entry to the property is crossed. We’re not “blaming” anyone here but it sure seems dumb to be racing a fast car without so much as a helmet on, but that is just us.

What you’ll see here, helmets and shorts aside is a pretty healthy 1967 Chevelle hurtling down the track, sideways from the start and then booming a transmission pretty hard at the top end. The guy driving does a damned fine job hanging onto the machine for a short time before it gets off the track and eats up some of the sunken telephone poles that line the shutdown area. The poles may be crude but they get the job done here by keeping the car out of the people and directing it back toward the track, where the driver climbs out. Make sure you stick around to see the under car shot where the guts of the transmission are hanging right out in the breeze.

Once again, big ups to Urban Hillbilly video for cranking out this killer footage from their archives. Visit their page on YouTube…it is a gold mine of video awesome.