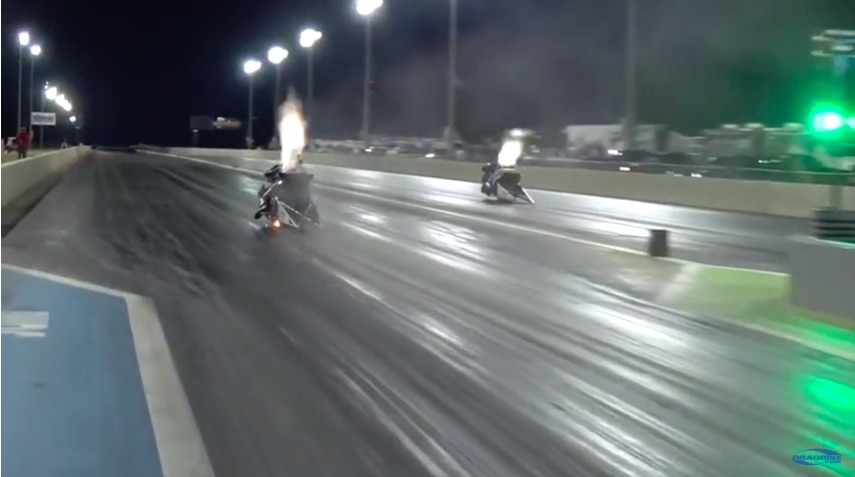 Larry McBride, the Ruthian motorcycle drag racing legend added even more size to his amazingly massive resume of accomplishments a couple of weeks back when he annihilated all previously existing performance marks in the world of top fuel motorcycle drag racing by dropping a stunning 5.611-quarter mile run on the world at South Georgia Motorsports Park during the famed Man Cup event at the track. The entire race was madness with performance numbers the world had never seen before in multiple categories including some Harley Davidson coolness we’ll touch on in another post.

The video captures the 5.611 pass from the starting line and one thing to think about here is that we are talking about 1,500hp motorcycles that have so much traction that the front tire does not touch the ground until well after the finish line when the rider closes the throttle. McBride who earned his nickname “Spiderman” after a track announcer commented on how he moved around on the bike to keep it in the groove was up to his old tricks on this run. You’ll see him in the right lane moving judiciously to keep the machine balanced and happy on the track.

South Georgia Motorsports Park is an interesting place because while we do not hear about it on a week in and week out basis, the track hosts some huge events every year and the surface is so good that if the weather conditions meet the competitors, magic happens. The cool thing about the “magic” in drag racing is that it can only truly happen when the conditions are right and the team is talented enough to make full use of them. In this case, McBride’s guys had the bike tuned all the way up and it took the whole thing.

This is truly awesome.