Video: Line, Capps, and Pritchett Score Victories At Brainerd, See How They Did It Here! 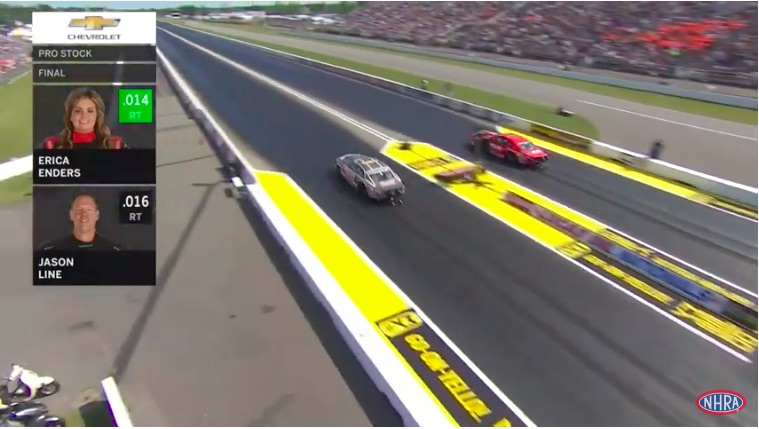 It was a banner day for Don Schumacher Racing in Brainerd, Minnesota on Sunday as the team won both the top fuel and nitro funny car class Wallys while Jason Line collected the victory in pro stock for KB Racing. The crowds, the weather, and the competition were all spectacular all weekend at Brainerd International Raceway. Aside from a soaking rainstorm that hit the local area late on Saturday night, there was nothing for anyone to complain about performance-wise at the event.

For Ron Capps, it was his second final in as many races with this one carrying the preferred outcome. He out paced his teammate Tommy Johnson Jr in the final round runoff. Johnson did not have his typically solid reaction time on the run and Capps took advantage, leaving first and running hard to the finish line stripe.

Leah Pritchett handled her business with a level of acumen all day that had eyebrows raised around the pits. Four solid reaction times, four solid driving jobs, and four win lights earned Leah the Wally and earned Don Schumacher Racing their first top fuel win in over a year, the last one coming at Seattle, Washington in 2018! As you will see below, the old man was happy.

Lastly, Jason line won this event a couple of years ago but the rain soaked weekend was never finished at BIR. He won the race but at the US Nationals during qualifying. Winning at his home track has been hard for Jason in pro stock but he finally got it done this year and the place went nuts! The roar from the stands was really, really, cool and his genuine emotion is as well.

Check out the videos below for all the action!

Dragster In The Woods: This Rescue Of An Amazing Vintage Dragster Will Have You Smiling Your Moment Of Zen: Lead Welding Techniques - Proposition 65 Be Damned!