The Friendliest Thrash: An LS-Swapping A Mustang In A Drag Strip Pit Area For The Best Possible Reason You Could Imagine 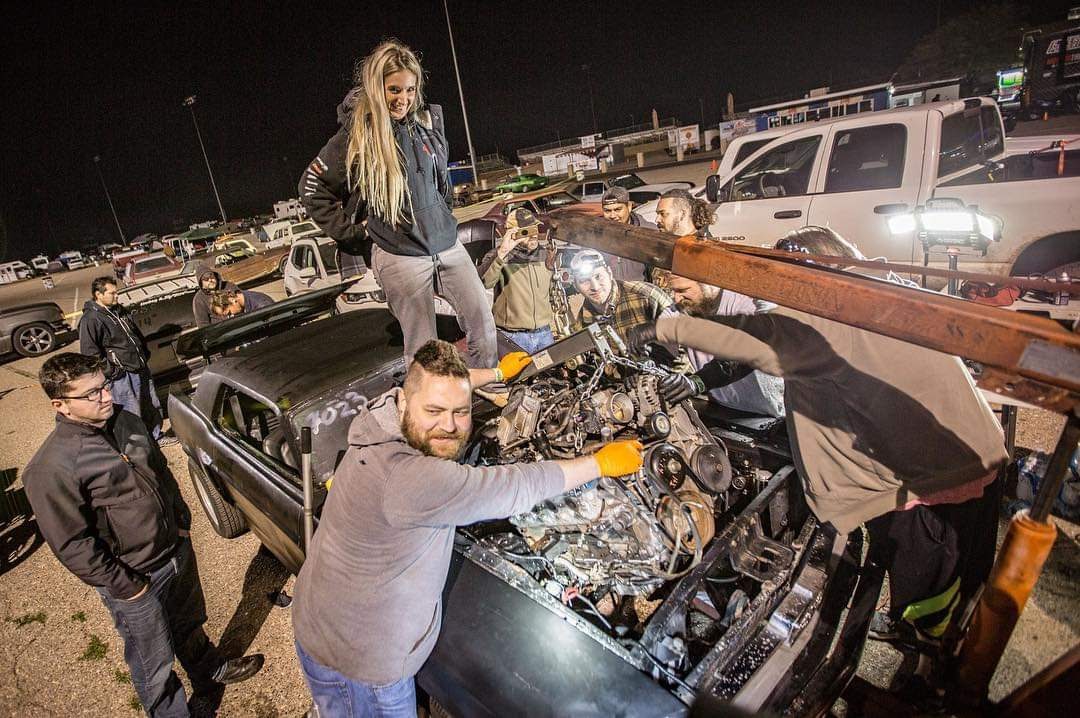 (By Jon Bunger) – You’re probably asking yourself- if not screaming it at your screen right now- why a group of strangers would attempt an LS swap on a ‘67 Mustang in the pits of a Roadkill event. Although thumbing a nose at purists in a public setting is good clean fun, the real reason for the build is a lot closer to the heart.

Matt Henry, the owner of the car, is a father of 6, husband, surfer, and longtime friend of the Roadkill family from Imperial Beach California living with inoperable brain cancer, and he’s the catalyst for it all. Matt and his chopped top, suicide door, ‘67 Mustang first appeared at Zip Tie Drags a couple years prior, having barely let the rattle can paint dry before driving to Arizona. Matt and his “inoperable meets unstoppable” attitude quickly made him friends the Roadkill crew and a bunch of fans in the pits, before long he was racing the Draguar and attending another event for the $3k Hooptie Challenge. Henry’s habit of making memories and friends wherever he goes snowballed into the crazy idea of swapping the wheezing 289 and slipping C4 trans in 1 day at the next Roadkill event. Like gearhead moths into a flame, a band of gearhead misfits bought, donated, and stole from their own project cars an engine, transmission, wiring, and every bolt needed to make the swap happen. A few businesses caught wind of the idea- Dirty Dingo, Scram Speed, Transmission Done Right, Griplock Ties, and Venom Steel- and donated motor mounts, power steering adapters, a transmission rebuild, reusable zip ties, and gloves to help out. 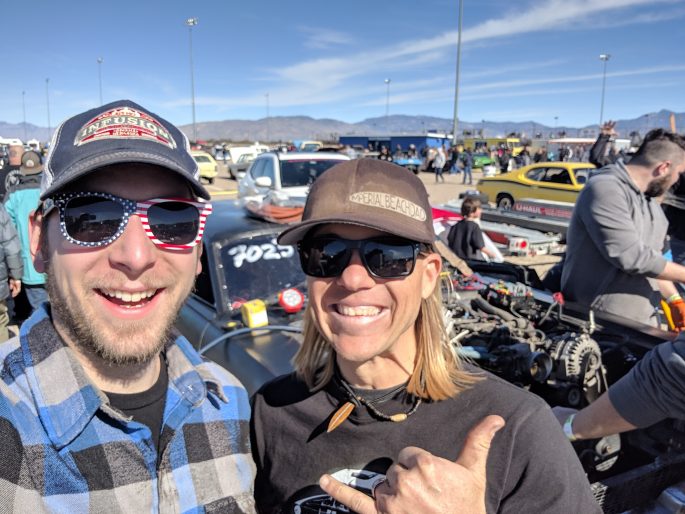 Unsurprising to anyone who’s seen a Roadkill event, Friday leading up to the swap went over like a fart in a spacesuit. Henry strapped a spare axle to his trunk and joined the convoy from California to Tucson bright and early, misting out enough oil to make an Exxon CEO blush in the process. Other members of the crew enjoyed the usual scramble of loading tools and trucks until the wee hours of the morning, followed by an impressive traffic jam at the track gates. In true Roadkill fashion, the crew and soon-to-be victim Mustang were assembled 4 hours later than planned. Undeterred, the crew still yard-saled the old power plant into the parking lot, test fired the LS on the stand like maniacs, and mocked it up in the Mustang before the lights went down. What was previously a running car a few hours before, albeit smoking and leaking, was turned into a makeshift swap meet 400 miles from home with no backup plan to get it there. 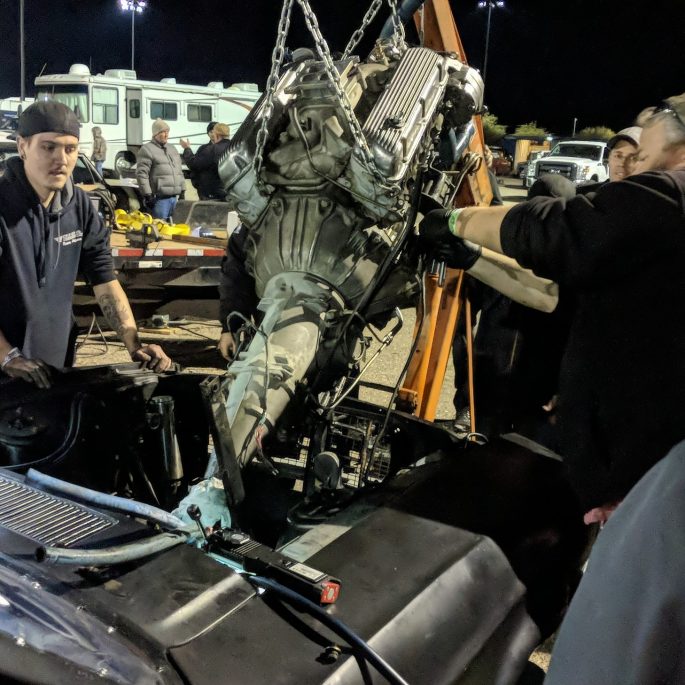 A few sleepless hours later, the crew assembled around the car to assess. With no shifter, no cooling system, no trailer for backup, and about 12 hours until the track closed there was serious work to be done. By the time a driveshaft and motor mounts were in, a crowd started to form around the car- word was getting out and the fans were digging it. Lucky Costa even dropped by to check it out and deemed the effort “Roadkill to the 11th degree.” Seeing a pair of headers getting bashed like they were caught breaking in, a rep from Crower stopped to see what the excitement was about- before he left the president of the company was on the phone promising a custom cam and valvetrain for a car that nobody had seen running yet.

Much of the crew was splitting time racing and working on the car- with each item crossed off the checklist more gremlins and roadblocks were popping up. The question on everyone’s mind- “would the car be done in time to make a pass?” Jim Hughes, the owner of Tuscon Dragway, stopped in and proclaimed it the most impressive feat of hot rodding he had seen at that track in decades, and struck a deal with the crew: if the car was running by the end of the Hooptie Challenge, he and the whole crew would stay on to see the car make a pass. With just hours to go and fires re-lit under the crew, it was do or die time. 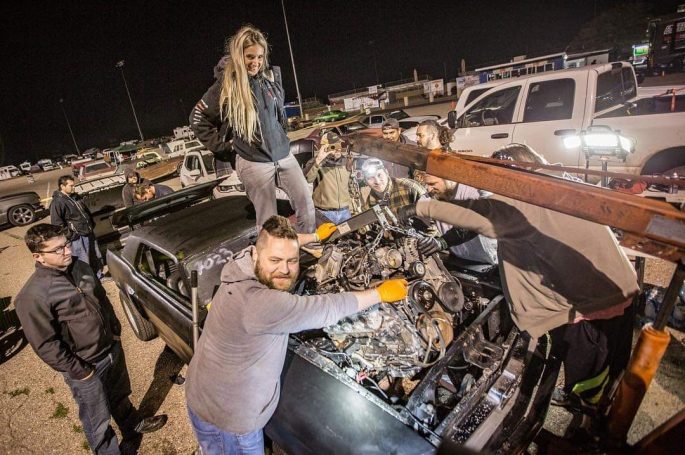 With the finish in sight, the motley band of mechanics set to welding power steering lines together and cobbling a pile of radiator hoses in to hold fluids. A mess of wiring under the dash still had to be sorted to use the factory ignition switch, and an overlooked steam port threatened to shut the whole operation down. With the help of a few hot wires and a coolant drain threaded directly into the radiator tank, the Mustang roared to life amid cheers from a growing crowd.

Hughes tore into the pit area having heard the commotion and told the crew “don’t worry if it leaks, I’ll clean it up tomorrow!” – a sentence never before uttered by a drag strip owner. The crowd of bystanders sprinted to the track to witness the first pass, and the Mustang ripped the smokiest burnout of its life to meet the cheering. The Mustang lurched past the tree spinning nearly half the track, still managing to shave 2 seconds off its best ET. 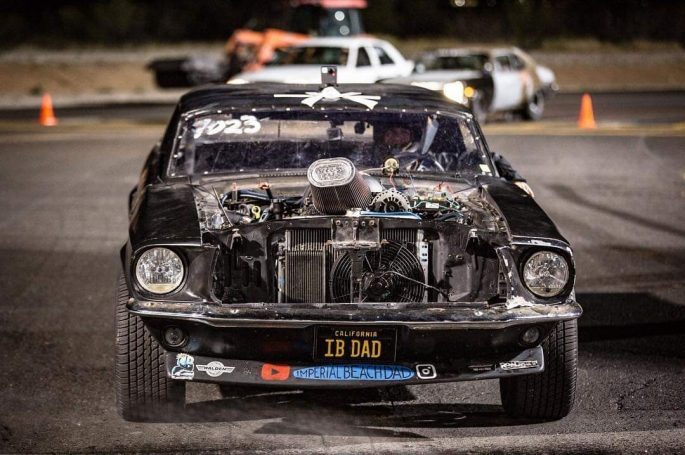 The crew had done it- in just 1 day they turned a worn out junkyard dog into a fuel injected, 4 speed automatic road trip and burnout machine. Matt and his family were set to enjoy their old ride for many miles and adventures to come. A group of strangers and neighbors had come together around an idea and built more than just a car- they had built friendships and memories that would last a lifetime. At the end of the day, this Mustang was something more special than a numbers matching restoration- it was a catalyst for smiles, friendships, and adventures on a shoestring budget.

Check out a build video here (https://www.youtube.com/watch?v=flX8657LOYc) of the engine swap and subscribe to see more upgrades and adventures with the car. 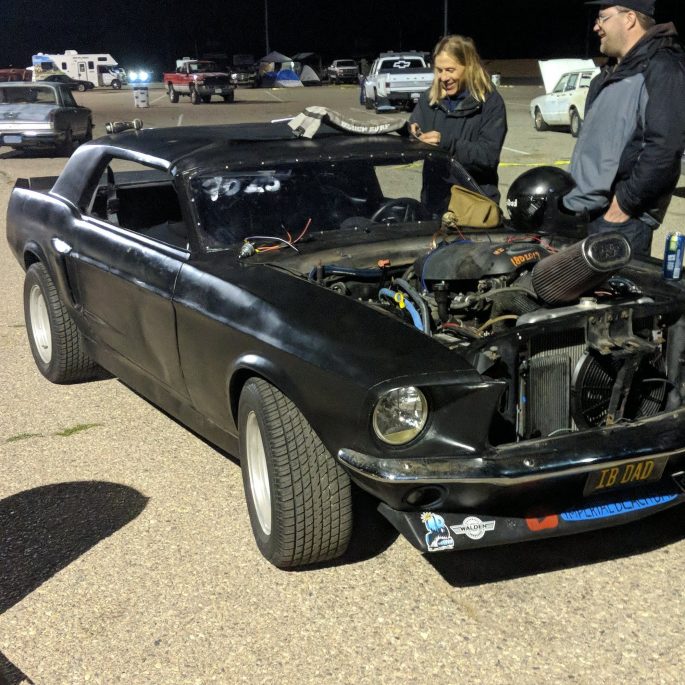 2 thoughts on “The Friendliest Thrash: An LS-Swapping A Mustang In A Drag Strip Pit Area For The Best Possible Reason You Could Imagine”