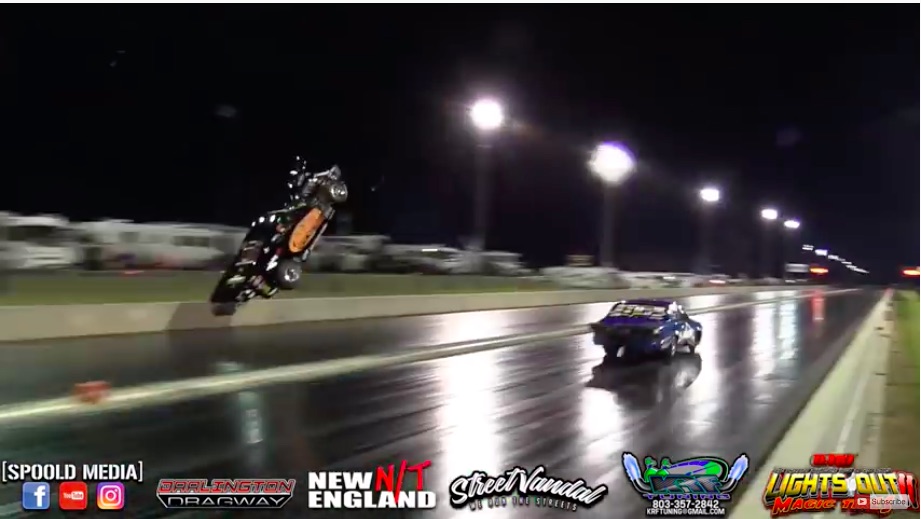 South Georgia Motorsports Park has been known as the “Home of the Flying Cars” for years and frankly it had been a few since we have see a car do what Marcus Birt’s did during Friday final qualifying at Dart Lights Out 11, which was to launch and then literally propel itself skyward and crash back down on the track. Advances in things like traction and wheelie control have largely put and end to the phenomenon but not all of it. As you will see in this video, Birt’s Corvette comes off the starting line with the nitrous header flames up and drives into a wheelie. The acceleration of the car combined with the air gathering under it causes the machine, which weighs more than a ton, to fly for nearly three full seconds before coming back to the ground.

Birt walked away, his Jerry Bickel built Corvette is a little worse for wear and will likely require a new front half to the chassis before it is back on the track again, and this certainly serves as a reminder that Radial vs The World cars continue to be some of the most incredible in the sport of drag racing. As older drag racing fans wax poetic about fuel altered, fans of this generation will tell the stories of these insane machines which seem to have a mind of their own at times and who, despite what some may think, are still governed by the laws of physics.

The conditions on Friday night were astronomical and these cars were running in are that was basically -500ft below sea level. The cool, dense, air allows turners to pile fuel into the engines and as such more nitrous as well. This car was well below to one second mark to sixty feet and actually failed to record a 330′ time because the machine had sailed (no kidding) right over the reflector that triggers the time clock to record a number.

In a testament to the quality of the car, Birthings lands and is able to steer himself away from the wall where a second impact awaited him. We’re glad the nose came off of the car because if it didn’t we’re thinking that Birt would have been on his roof for the landing. THAT would have been a first and one we’re not itching to witness.

If You Want Something That Really Fits Your Custom Project, Then Chassisworks CustomFit Is The Chassis Solution For You BangShift Question Of The Day: How Much Fun Have You Had With Rolling Garbage?