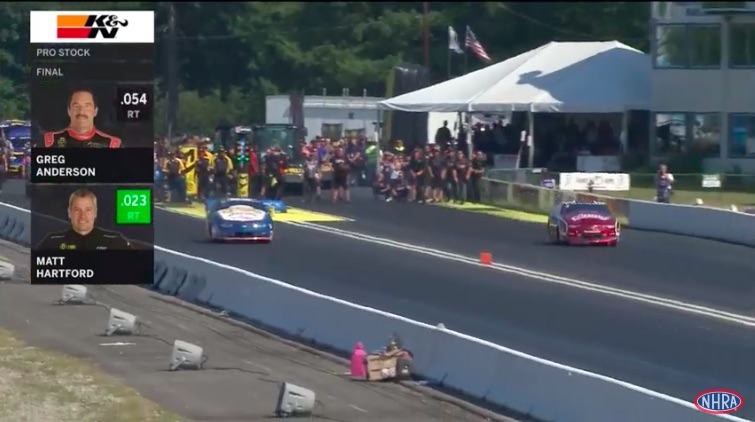 It was signed, sealed, and nearly delivered. In all of the craziness surrounding John Force’s historic win in Seattle, one of the big stories that may have gotten lost in the shuffle is the pro stock victory of Matt Hartford who thwarted Greg Anderson’s hopes to do something no one in history has ever done. Anderson is the only pro stock racer to ever sweep the three race turn out west and he did it in 2004. No one has ever pulled the sweep job twice in any professional category.

With a car that was strong in eliminations, Anderson was driving well and by all logic was the favorite in this final round. After all he had sucked up 11 rounds straight since competition began in Denver a few weeks before. Matt Hartford clearly had an idea of this but also he had something else going for him, confidence.

Hartford is in the midst of the best season of NHRA drag racing he has ever had. The win may have been his first of 2019 but the dude has been in  a grip load of finals already and we’re not even at the playoffs yet. Hartford is a legitimate threat to challenge for a world championship in 2019, something that even just two seasons ago would have been laughable to not only fans but to Hartford himself.

How do you win championships? By doing stuff like this.

Action Photos: 2019 Magic Dry NHRA Northwest Nationals - Pro Class Photo Coverage Hard To Hate On: This 1974 Chevelle Is An Awesome Example Of How Cool These Cars Can Be