Remember The Time Mike Joy, Shirley Muldowney, and Bill Stephens Called A Drag Race On Tv? Neither Did We! 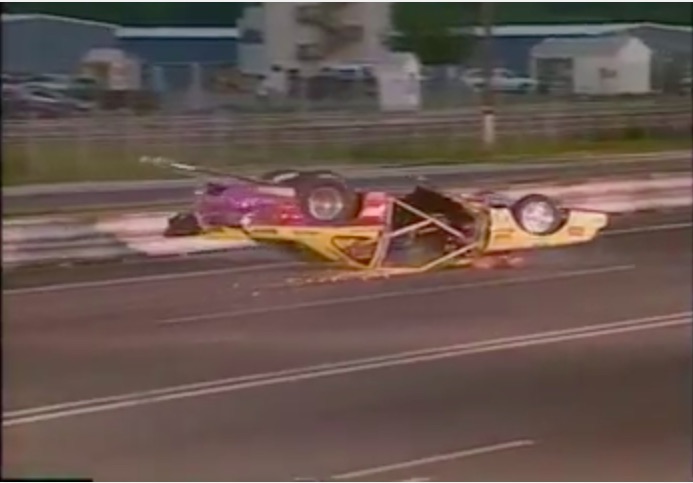 Ok, we never knew that Mike Joy, Shirley Muldowney, and Bill Stephens announced a drag race together but they did! This video posted by the DragTimes2 YouTube channel is pretty amazing because it features an interesting door slammer event taped at Englishtown during the 1990s. While we know none of the details from the event we do know that this clip features Animal Jim Feurer and Mike Castellana hurtling down the track. One of the guys makes it and one does not. Spoiler alert…Castellana makes it.

You will see Animal Jim Feurer roll his stuff and go on a slide for life in his Thunderbird as the thing gets on the roof and then whacks the wall. After talking with Bret Kepner we learned that this was a short-lived TV series that made it an episode or two before being whacked. The fact that this video exists at all is pretty amazing.

You will see that Animal Jim, who is a door slammer racing legend was none too pleased about his roof-slide down the track. We did dig the fact that he mentioned that it was the fourth time in his career he had been on his lid. It is kind of neat to see the reception he got when he came back up the track and the crowd went berserk as he stood in the center of the strip post wreck.

While Animal Jim’s career on the track is over, Mike Castellana’s continues strongly. He’s currently leading the J&A Service NHRA pro mod points and is the odds on favorite to win the season long points championship. He’s a tough nosed NY area racer that knows what it takes to get the job done in these cars. Having raced them for 20+ years is something of an advantage over the competition. That being said, he has been around pro mods since 7s were fast and he is now the NHRA record holder at 5.68! This full-sized nitrous Camaro is pretty awesome but could not hold a candle to the Camaro he races now.

Press play below to see Animal Jim wreck his car with Shirley Muldowney and Mike Joy On The Call!

One thought on “Remember The Time Mike Joy, Shirley Muldowney, and Bill Stephens Called A Drag Race On Tv? Neither Did We!”