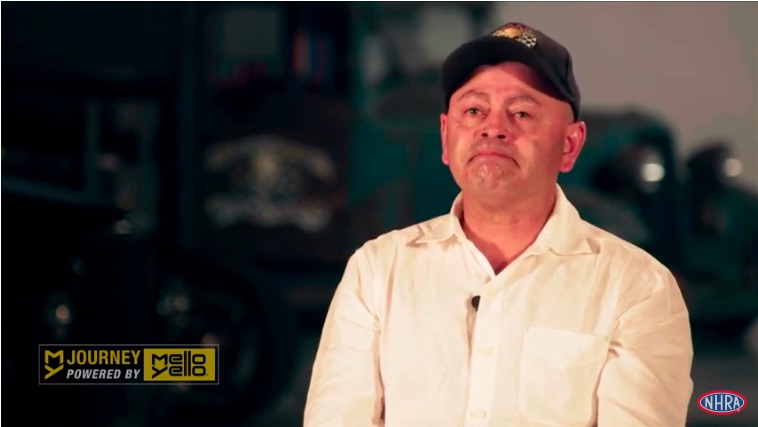 One of the neat things that we get to see each season as part of the NHRAonFox summer race broadcasts is the #MYJourney series. This series of in-depth interviews brings the backstories of the biggest NHRA drag racing stars to life and they are filled with smiles, tears, twists, turns, and coolness.

The most recent subject of this series was Mike Salinas. He sat down with Jamie Howe at his San Jose, California shop to talk about his life and how his family has risen to become one of the most prominent in the sport of drag racing.

Mike’s road was not an easy one. His family struggled mightily when he was a child and from the age of six he was out finding ways to make money and keep the bills paid along with food in the mouths of his siblings. You will hear him talk emotionally about those times, about his ability to start and grow businesses, and his hard-ass nature that had both been the foundation of his success and a struggle to overcome at times in his life.

Mike runs top fuel, his daughter Jiana runs the pro stock motorcycle category, and Jasmine is in an injected nitro burning dragster. His wife Monica is at the track every race as well. These guys are serious and this piece will educate you as to why.

Mike Salinas is living the American dream. One crafted from the pressures of being broke, being motivated, and being harder than granite when necessary.

Disaster Video: Incredible Footage Of The Yellow River Drag Strip Calamity Has Surfaced - 50 Years Ago, 11 Killed Get In On The American Powertrain Summer Smokeout Sweepstakes - It's FREE To Enter!