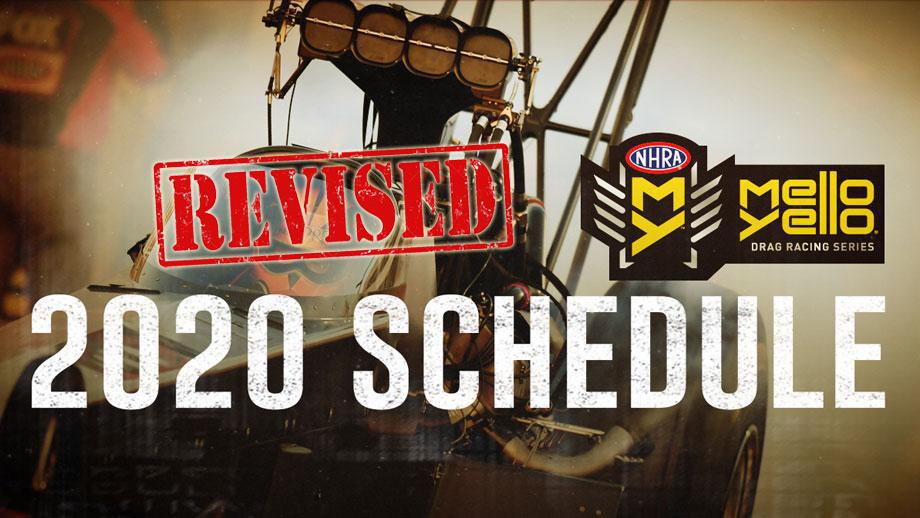 The NHRA has released a revised schedule for the remainder of the 2020 Mello Mello Drag Racing Series tour and it is one that includes some significant changes. Interrupted by the COVID-19 virus outbreak like all other motorsports, the series will consist of a total  of 19 events starting with the 51st Amalie Oil Gatornationals June 5-7, 2020 in Gainesville, Florida.

Events that will not be contested in 2020 are:

Changes have been made to the format of a half dozen events, reducing them to two-day affairs in an effort to lessen racer costs and take the burden off of logistics. Events like Houston and Topeka have been moved in the schedule to best fit the traveling nature of the tour.

As there will be no points-reset after the US Nationals, the NHRA will have an old-school points chase to the end of the 2020 season, an interesting development that will make every single round, from here on out, count. This is a signifiant story and we’ll continue to update you with information as it comes.

Here is the full statement from the National Hot Rod Association –

In consideration of the COVID-19 global pandemic, NHRA officials have announced revisions to the 2020 Mello Yello Drag Racing Series schedule. The series is tentatively planned to resume June 5-7 with the Amalie Motor Oil NHRA Gatornationals at Gainesville Raceway. The season will conclude with the crowning of the Mello Yello Drag Racing Series champions November 13-15 at the Auto Club Finals at Auto Club Raceway in Pomona.

The revised schedule will consist of 19 total events, with 17 of those events being contested when the series resumes in June. Six of these events will be condensed to two-day competition schedules for the Mello Yello Drag Racing Series classes due to economic and logistical factors. As a result of the compressed schedule, points will not be reset after the U.S. Nationals at Lucas Oil Raceway. NHRA has held two make-up dates on the calendar in case there are further delays.

Money No Object: 1979 Dodge W150 Power Wagon with Macho Package Know Your Gearbox: This Walk Around Of A Tremec Magnum Six Speed With American Powertrain Is Great