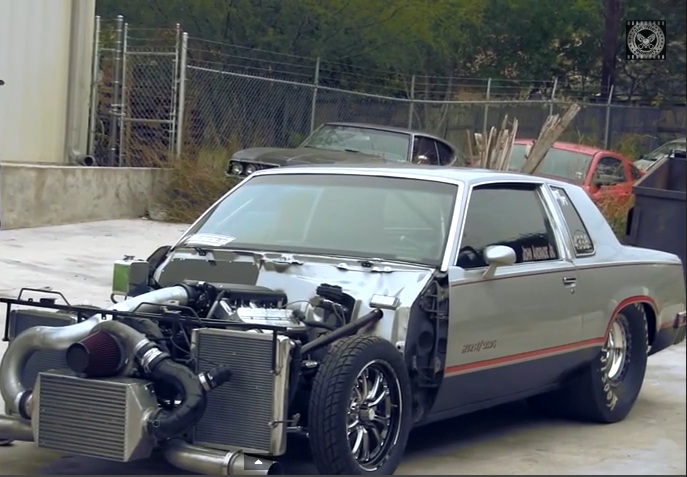 The NHRA has sent strongly worded letters to virtually everyone who is appearing or has recently appeared on the hit Discovery Channel television show Street Outlaws. This show follows the exploits of a group of racers based in the Oklahoma area who “street race” on a weekly basis throughout the show’s season. The letters were delivered to most of the cast today as they began to appear on social media hot and heavy Tuesday evening. As predicted the reaction is as polarizing as the televisions show itself.

Supporters of the series are yelling and screaming that the NHRA is trying to squash the popularity of the Street Outlaws franchise while those that dislike the show in the first place are heartily agreeing with the NHRA sending the letters that state the very premise of the program violates the basic reason that Wally Parks founded the NHRA in 1951. It states plainly at the bottom of each letter, “Future participation in the show or any show of this nature may result in an indefinite suspension of your NHRA competition license.” That would mean that the racers would not be able to compete at NHRA sanctioned tracks across the country.

Rumor has it that this situation became a topic of discussion at the NHRA when an episode aired where the Oklahoma racers visited California and during said episode there were cars on the show which wore their NHRA competition numbers on the windows or the numbers were spotted on a support vehicle, etc. From what we have gathered, that is what put the whole thing on the NHRA radar screen and it seems to have escalated from that point. Obviously this is a hot button issue and the opinions vary wildly across the drag racing internet realm at this hour. It is well documented that the television audience for the Street Outlaws show is massive and outdraws all other drag racing programming on television so there are some claiming that this is a conspiracy to stop that. We’d argue that the PINKS phenomenon when it was rolling could make the same claims but no action was taken against them as the format of the show lent itself to traditional drag racing.

Another common theme is that “everyone knows” that the show has streets closed, police involved, lighting, safety, and other measures in place to protect the participants and crew but we’re not sure that it is ever directly stated on the show where a viewer could see it. If that is the case this may be a statement by the NHRA along the lines of, “If you tell me it is real, I am going to believe you.” We can understand both sides of this one to some degree.

With regard to the NHRA, the organization was founded on the tenant of recognizing hot rodders and taking their activities off the public roads and onto closed courses. On the side of the show there can be a very valid argument made that the popularity of what they are doing has inspired tracks across the country to adopt programs to get these style cars to events and participating where they may not have previously.

The one thing that will be interesting is that last line because the season has been shot, the episodes are in the can, and what happens when those shows air, even after these letters have been received? Do the licenses get pulled? Do people get a pass until next season? Time will certainly tell but this one is by no means over right now. There are familiar racers who fall into this as well. Tina Jones Pierce, Jeff Lutz, and other drag week competitors have been sent the letters so we’re going to keep our ears on and watch how this one develops. 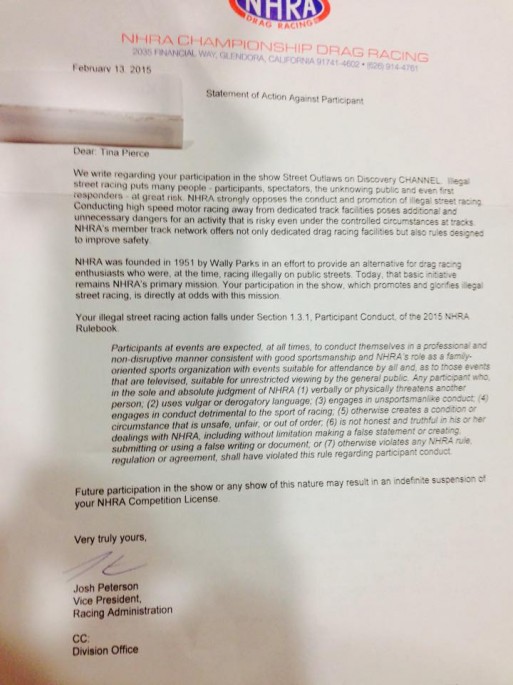