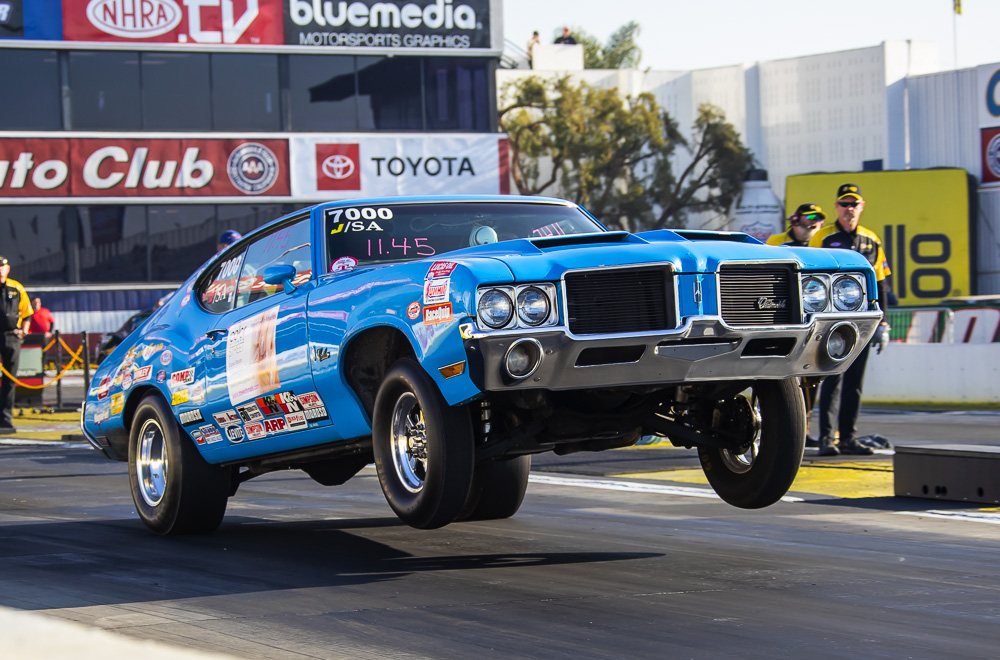 (Photos by Wes Allison) – The stock and super stock categories of NHRA drag racing have been and always will be right at the top of our list of favorites in drag racing. Yes, there’s stuff that’s more modern, advanced, and fast than these classes but in our mind, stock and super stock are the sport. This is the foundation that all of drag racing is built on and a place where the greatest cars Detroit ever built can still show off and show out. Hell, that’s an Oldsmobile pulling a power wheel stand above you!

Racers from all over the nation came to Pomona as they had done for 60 years to compete in stock eliminator and super stock. Class eliminations, bottom bulb footbrake competition during the eliminator, and the noise and fury of muscle cars all make an incredibly satisfying mix for the fans to enjoy.

The best part of Saturday and Sunday eliminations? The occasional heads-up run between two racers. In fact the final round of stock at the Winternationals pitted a 427 Ford Thunderbolt against a 427 Camaro in a heads up run! The Camaro had more guts and took the stripe, winning the event.

Insane Video: Watch This BMW Launch 15ft Into The Air After Hitting A Boulder At 70mph - Crazy Stuff! From Rust To Righetous: Street Machine's Rustoleum Valiant Wagon Project Kicks Off!