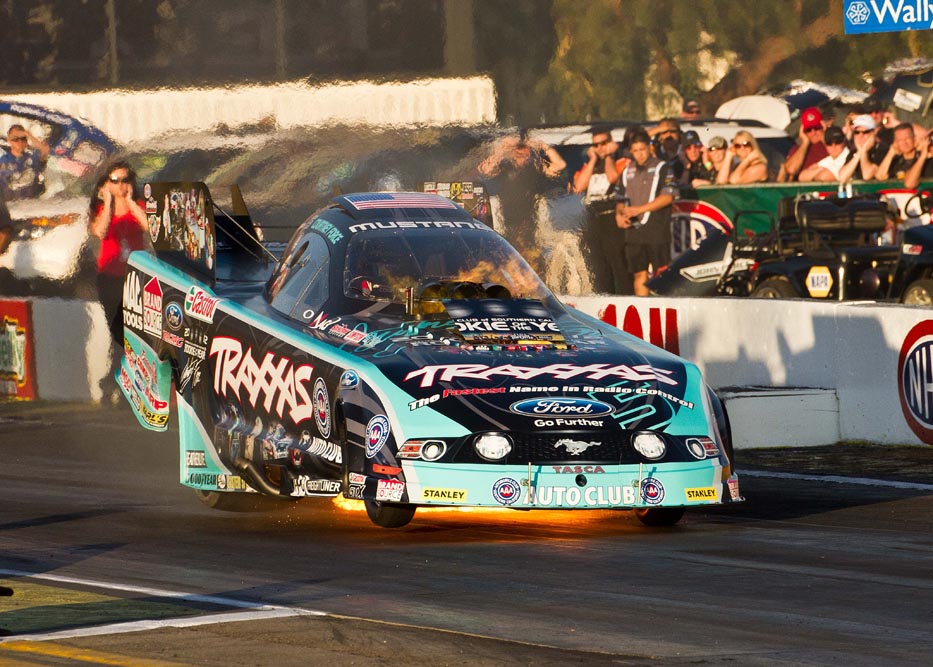 (Words by Darr Hawthorne) – The SoCal weather was great and the NHRA Mello Yello Drag Racing Series faithful showed up in droves to watch tight racing and crown event and series champions in the Professional and Sportsman ranks. Auto Club Pomona Raceway was packed. 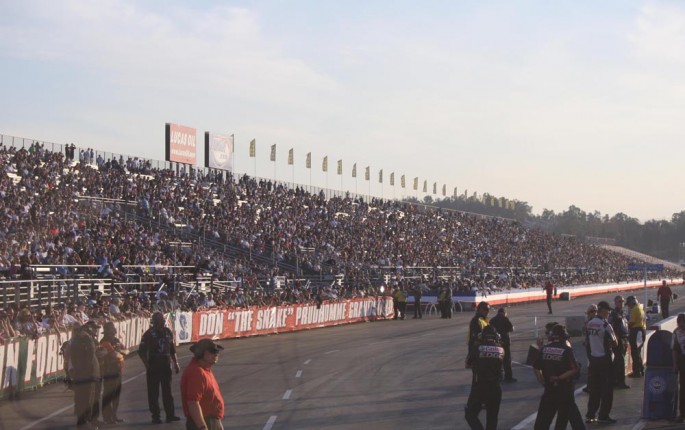 With the nitro Funny Car and Pro Stock bike class Champions finalized at the recent Las Vegas event, based upon past history, it seemed as though John Force was destined to win the 49th annual Automobile Club of Southern California World Finals, (jeez the 49th) at historic Pomona Raceway.  The dragstrip was started in 1952 by a car club known as the “Choppers of Pomona” and the local police department to help reduce street racing. 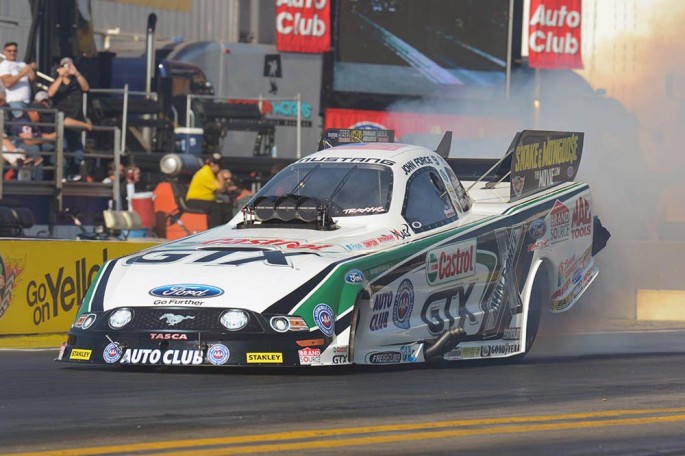 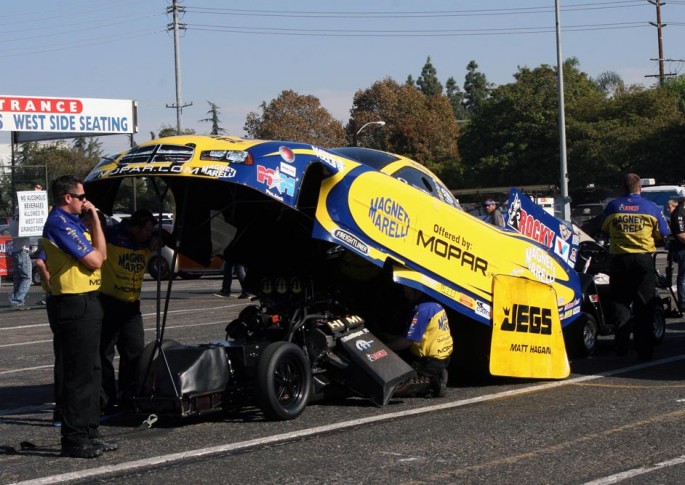 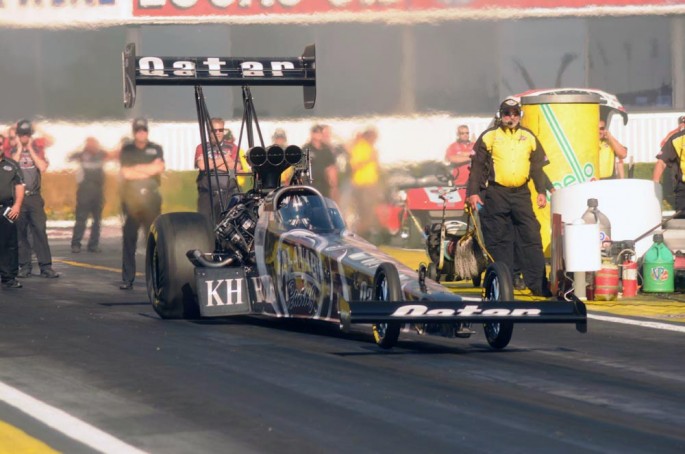 In Top Fuel, Alan Johnson’s Al Anabi team with Shawn Langdon driving, closed in and the won the NHRA Mello Yello Championship and the World Finals event here at Pomona with a dominant performance. He qualified second with a 3.750/327.03 to number one qualifier Brandon Bernstein’s 3.748/325.37.  (Jeff Burghardt photo) 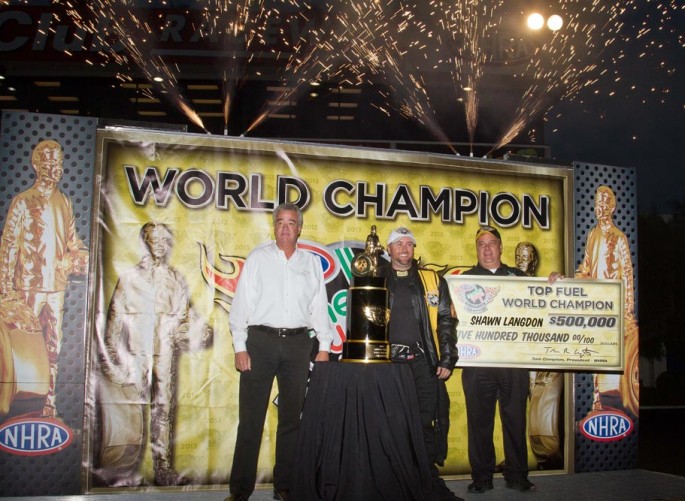 On the way to the Winner’s Circle, Langdon defeated Steve Torrence, David Grubnic and Clay Millican.  With this Pomona win, Langdon swept all the California events with wins at Sonoma, the Pomona Winternationals and the World Finals again at Pomona. (Darr Hawthorne photo) 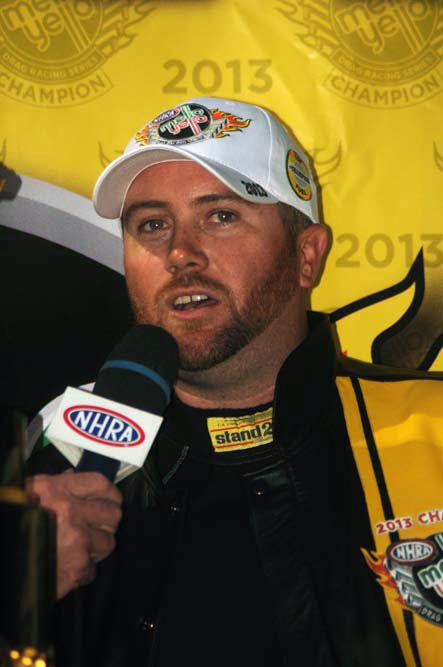 “I’m still learning, this is still new to me, but I think I’m getting better and better and the car just kept getting better and better.  This is the top of the cake with the win this weekend, I’m very fortunate to be part of a great team,” said new Champion Langdon. Prior to the event, Alan Johnson received the news that he will continue to manage the Top Fuel portion of Al-Anabi Racing, at least through the 2018 NHRA season.  The team will continue to field two Top Fuel dragsters piloted by current drivers Shawn Langdon and Khalid alBalooshi.  The five-year old team has now won NHRA Top Fuel Championships with Langdon, Larry Dixon and Del Worsham.  With this win, Alan Johnson is now a 15-time NHRA champion. 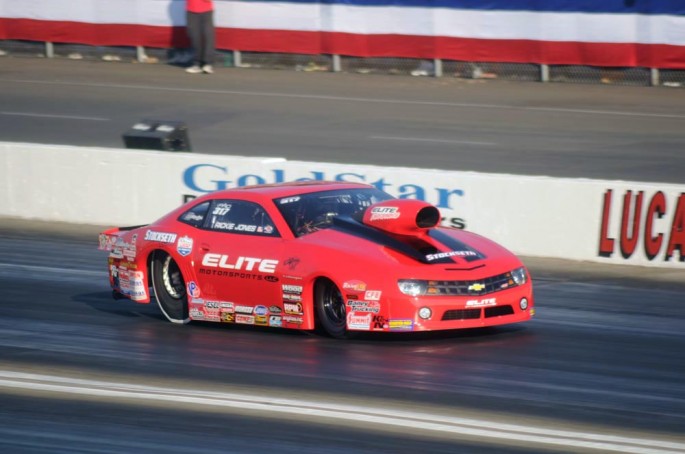 In Pro Stock it was first time winner Rickie Jones, driving the Elite Motorsports 2013 Camaro taking home the event trophy on a holeshot over reigning Champion Allen Johnson’s Mopar.  In the final, number three qualifier Jones left first with a .015 light to Johnson’s .030, but it was just enough to squeak by in the lights as Jones carded a 6.584/210.28 to Johnson’s quicker but losing 6.581/211.03, a margin of victory of approximately four feet.  (Darr Hawthorne photo) 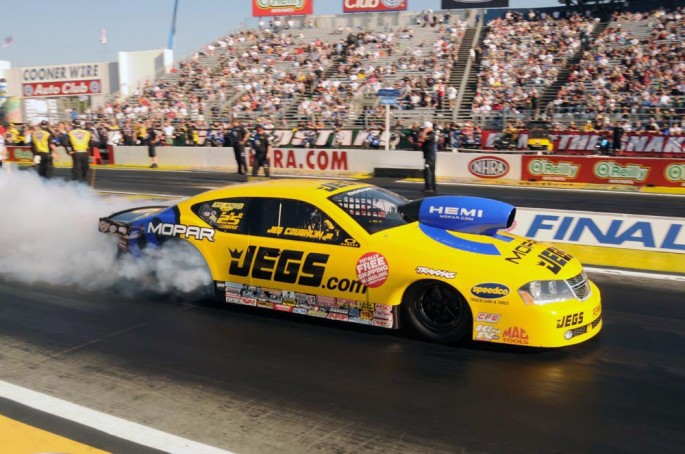 Midway through Pro Stock Sunday eliminations, Jeg Coughlin Jr. learned of his Championship win while waiting next in line strapped into his Dodge Avenger as Jason Line’s Chevy was eliminated by Buddy Perkinson.  That handed Coughlin his fifth NHRA Pro Stock Championship. Jeg then was eliminated from competition with a -.001 red light start against teammate Allen Johnson. (Darr Hawthorne photo) 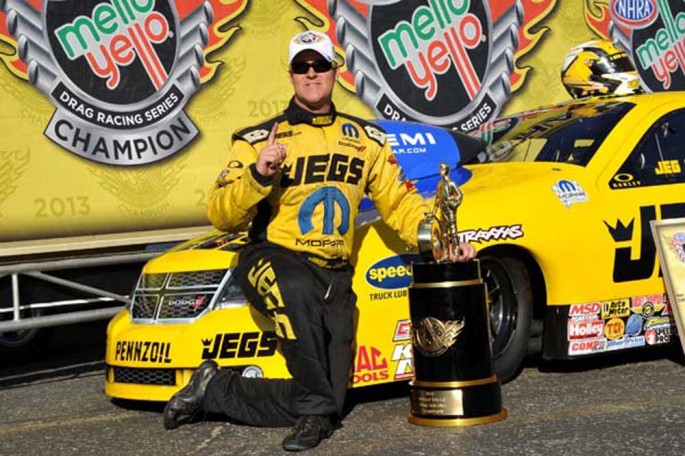 “This championship is extremely special to us, without question,” Coughlin said. “When I stepped away from professional racing at the end of 2010, I honestly wasn’t real sure how quickly I’d get back in the seat. But shortly thereafter, we put a great program together with our friends at Mopar to run a Dodge Avenger for the ’12, ’13 and ’14 seasons.”

“We didn’t rest too long. We transitioned to racing with Allen and Roy Johnson and the J&J horsepower they make and it’s been a great relationship.” (Jeg’s Photo)

Sunday’s final results from the 49th annual Automobile Club of Southern California NHRA Finals at Auto Club Raceway at Pomona. The race is the final of 24 in the NHRA Mello Yello Drag Racing Series. 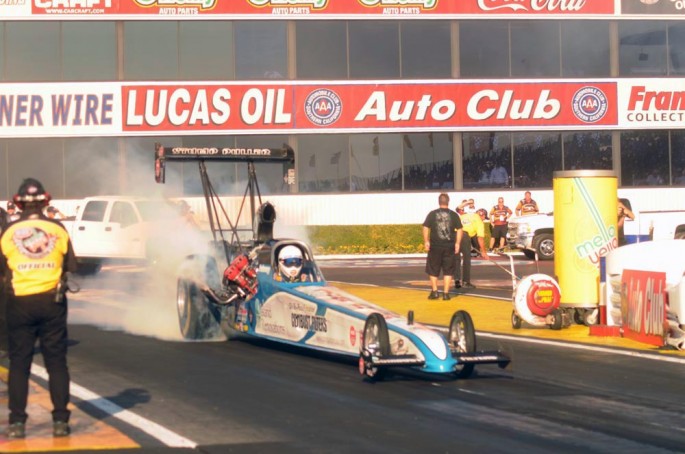 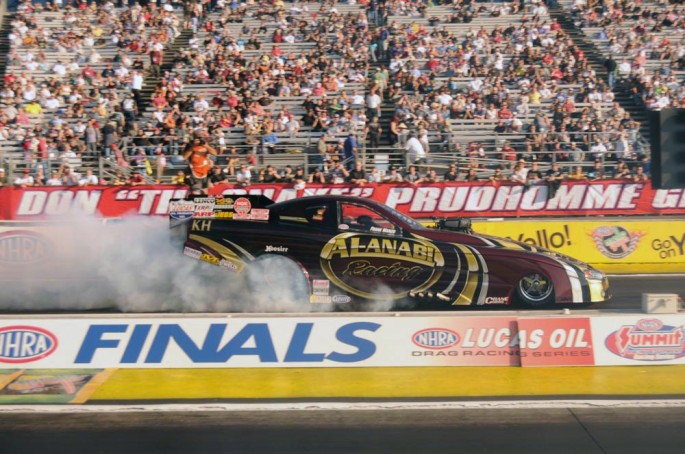 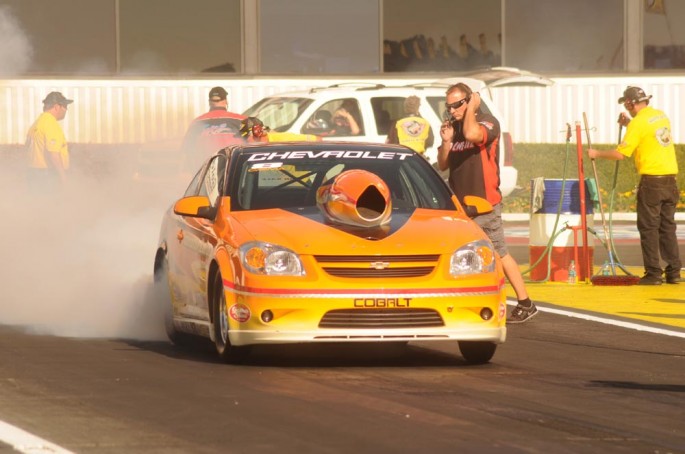 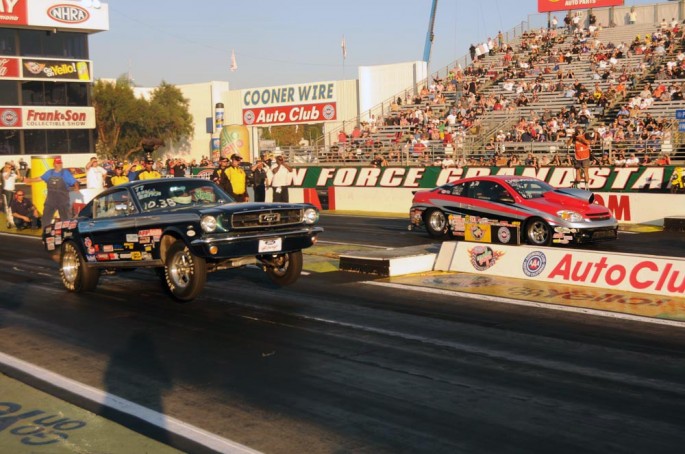 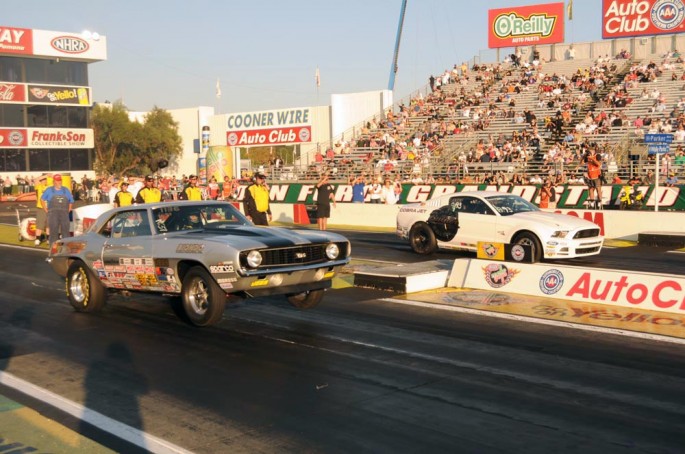 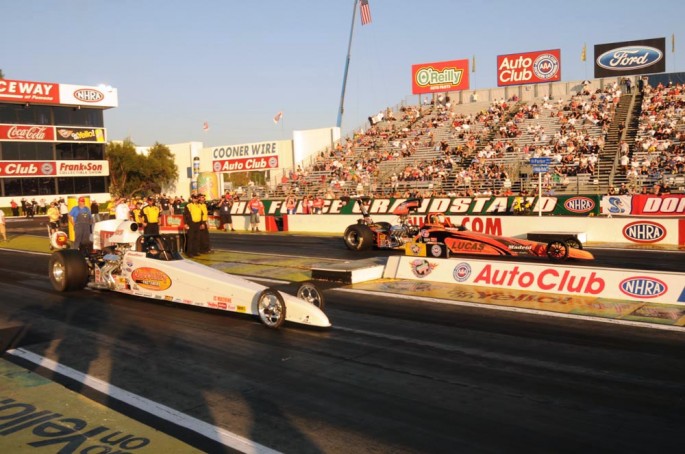 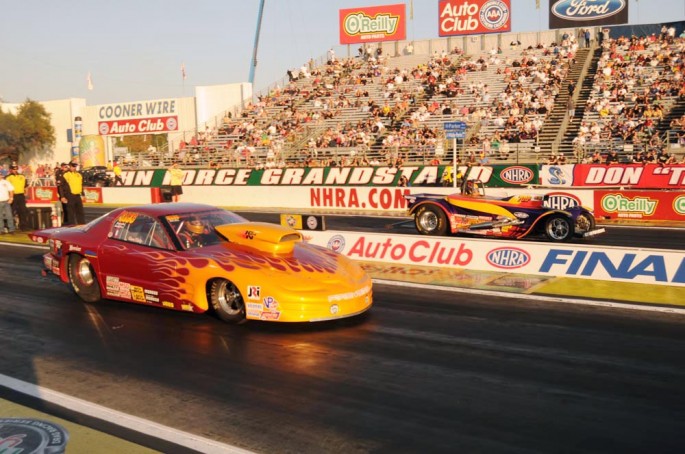 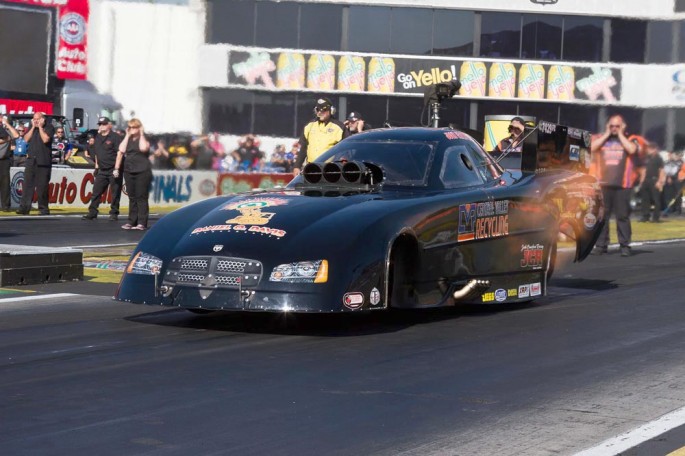 California racer Josh Crawford continues to improve his combination in his ’10 Dodge Charger-bodied funny car, but still missed the cut in the tough field with a 4.243 elapsed time. (Burghardt photo) 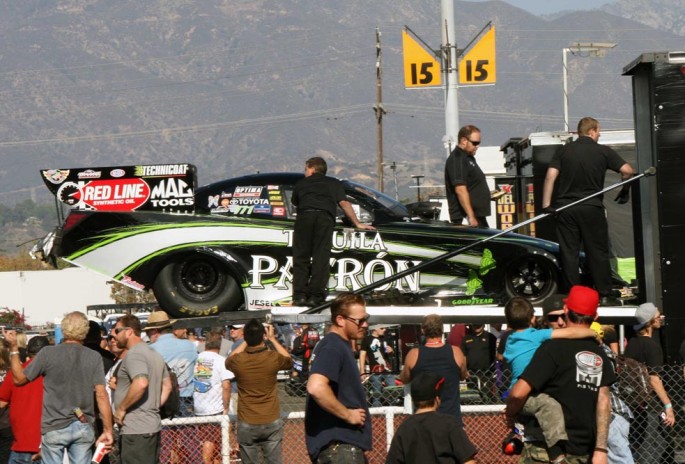 Alexis DeJoria’s crew loads the racecar early, after a first round, holeshot loss to event winner Matt Hagen.  DeJoria’s 4.056 was the low elapsed time of round one of eliminations. (Darr Hawthorne photo) 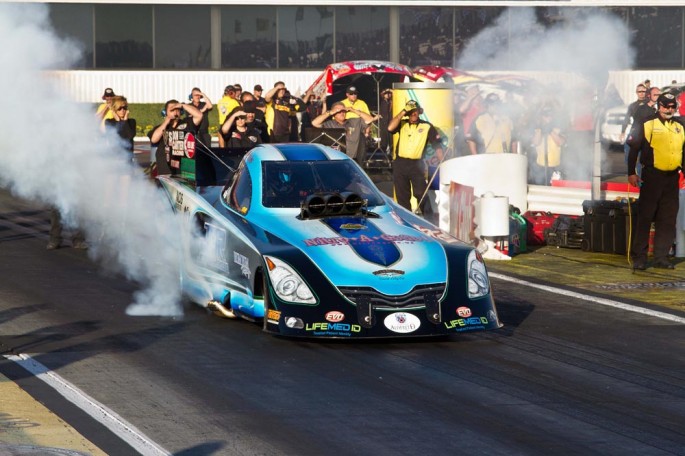 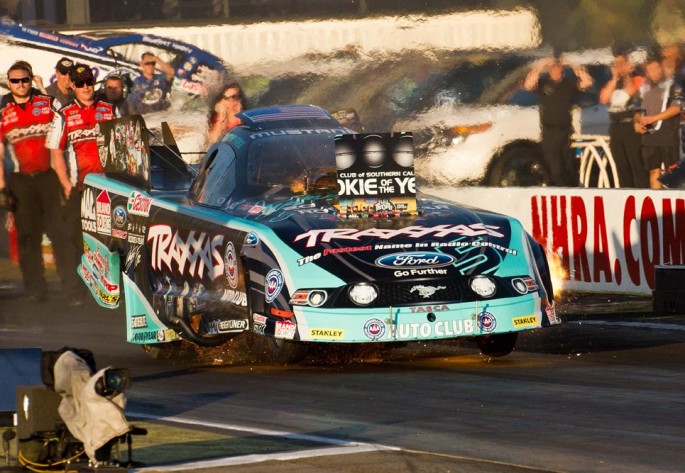 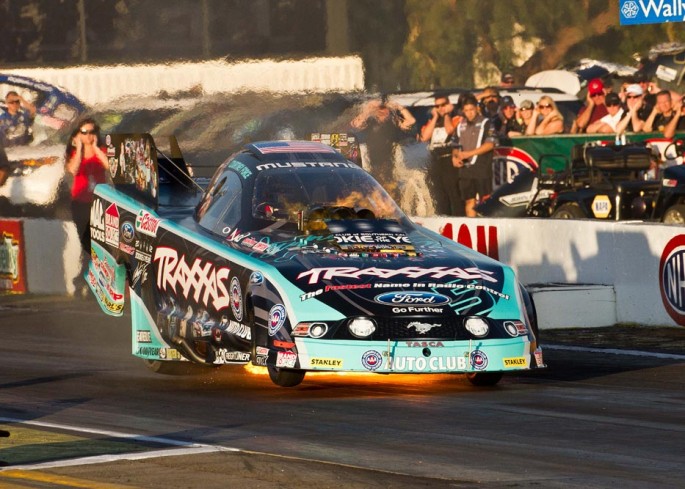 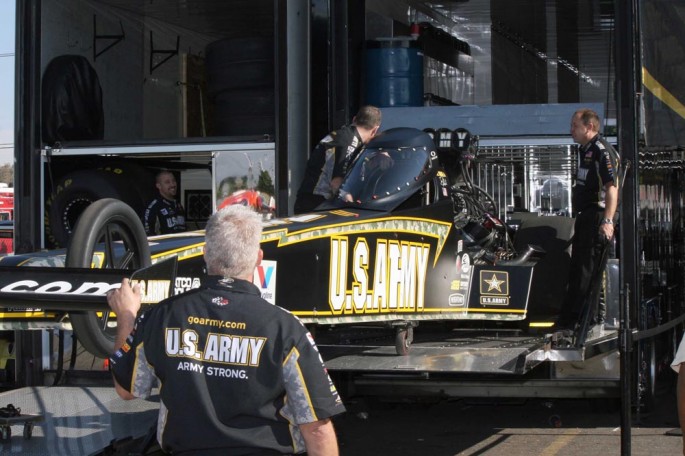 Tony Schumacher was on the trailer after a tire smoking first round loss to eventual Top Fuel runner-up Doug Kalitta. (Darr Hawthorne photo) 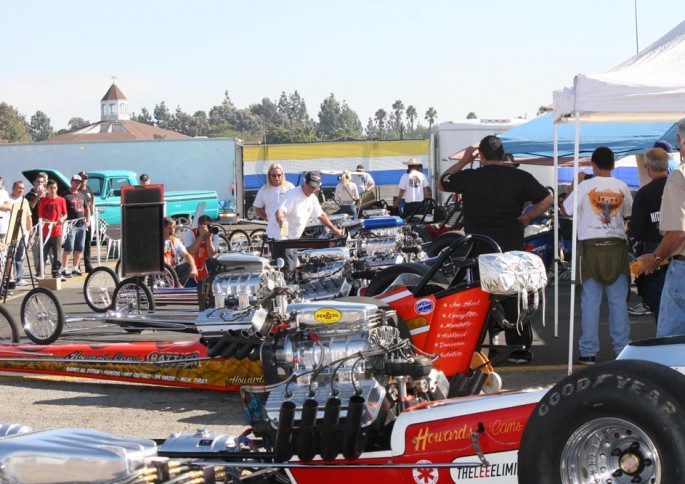 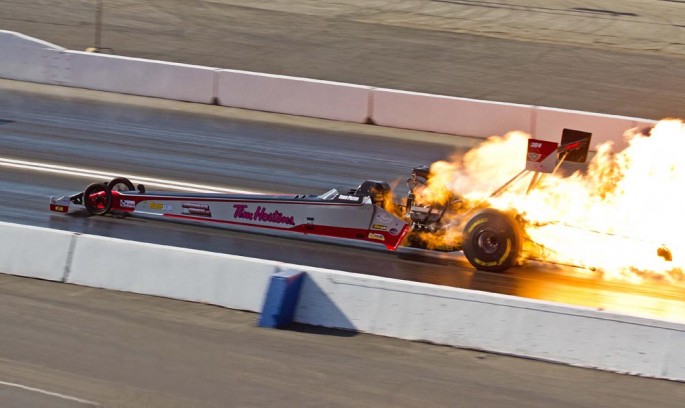 BangShift bud Todd Paton just missed the Top Fuel bump spot with his 4.017 qualifying effort.  Sometimes you have one of those days racing. (Jeff Burghardt photo) 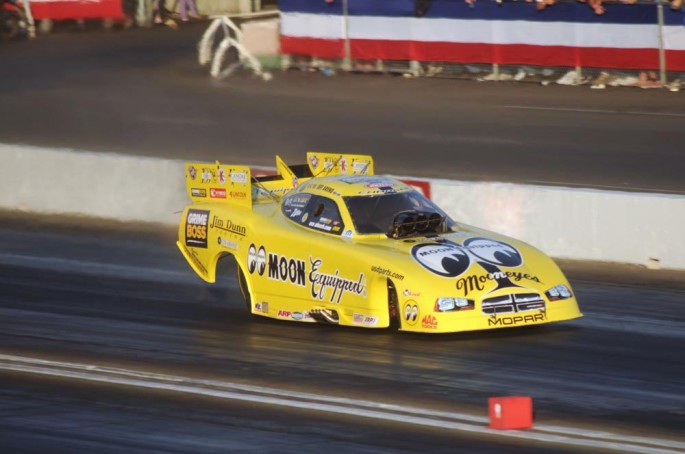 Jeff Arend was driving Jim Dunn’s Mooneyes-bodied funny car and qualified eighth, but was defeated by John Force in their second round smokefest.  (Darr Hawthorne photo)