Not So Short, Really Sweet, and Totally Brutal: Watch The Dirty 30 Burn Tires In Downtown Buffalo Leaving The Autorama! 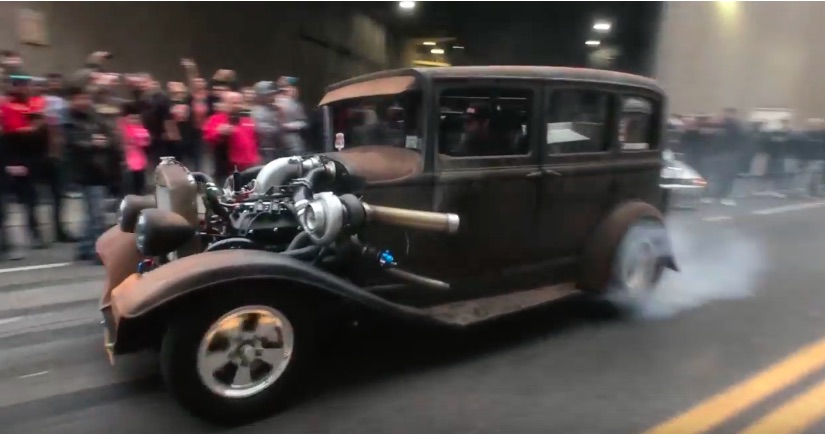 Yeah, yeah, yeah, we know that burnouts leaving a car show only lead to Mustangs in crowds and all that junk but hear us out. When guys are pulling their bad ass hot rods out of a convention center after a weekend of telling jokes, lies, racing stories, and bench racing you know what’s going to happen next. That’s doubly true when a guy like Nick Plewniak wins the Outstanding Street Driven award with his Drag Week machine known as the Dirty 30. Using the twin turbocharged big block Chevy that came out of his famed “Stretchy Truck” to power this wonderfully ratty old sedan, the thing is awesome.

Now, when you take this car on its drag radial tires, stick it in freezing ass cold weather on freezing ass cold pavement and give it the mustard you know what happens next. Shuttle launch. We do not know the history of big burnouts in downtown Buffalo but we’re guessing that this is likely a top five effort. Between the smoke and the ripping acceleration this was a pretty good show.

Nick and the Dirty 30 will be back at Drag Week in 2018 we’re sure. He got the thing finished a touch late last year but he showed up and put miles on the car. This thing runs deep into the single digits and it does so while looking like something out of a Steven King novel. It’s perfect in every damned way.

Less Show, More Go: This Square-Body Chevy Grudge Racer Is An Exercise In Simplicity...And Brutality! The Psychotic Shopping Cart: This 600cc Honda-Powered Trike Is The Toy We All Want!