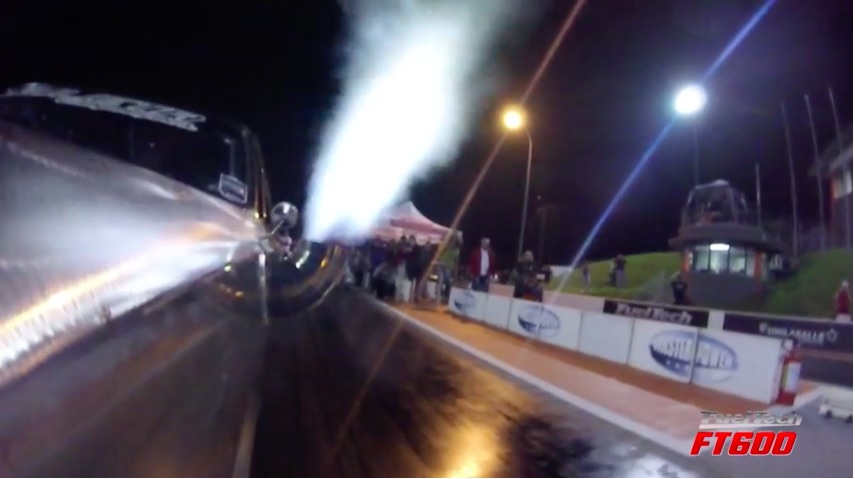 This is by far NOT the first time that a car known as Opala Metal has appeared on the pages of BangShift. It is however the quickest elapsed time we have ever shown and according to the video it is a Brazilian record for the class that the car competes in. How quick is it? The turbocharged Chevy inline size Opala runs the quarter mile, with a stick shift transmission, in 7.30 seconds at a speed of 195mph. This thing is straight up nasty.

We dig this video because it shows the car being run in the day and the night. At night, the header flame it throws while the timing is pulled to spool the turbo is awesome. The car really looks like a dream to drive. The type of dream you’d need to have some major sack to experience and enjoy, but a dream none the less. As far as how it looks going down track, the guys seem to have an awesome handle on getting the radial tire, stick shift car off the line. You can hear that it is softened up to keep the tire stuck to the strip but then when the boost comes in, the thing pulls along like a missile.

We’d love to line up an international showdown between some of these stick shifted cars that all run low 7s. No pro stock cars or anything, jut stuff that started as production line iron, all with different power, throwing down to show which car and driver is the best gear-jamming combo.

I can’t wait to get to south America sometime to see the scene down there! Watch Opala Metal Run 7.30/195mph!

Press play below to see the Opala Metal do it was designed to do in Brazil – Nasty!

Cool History: A Look Back At GM's Fremont Assembly Plant In Vintage Photos Are You A Plumber Named Mario? BFGoodrich Wants To Help You Get A Free Set Of Tires!

2 thoughts on “Watch The Gnarly Brazil Based Opala Metal Run 7.30/195mph – Turbo Inliner and a Stick!”