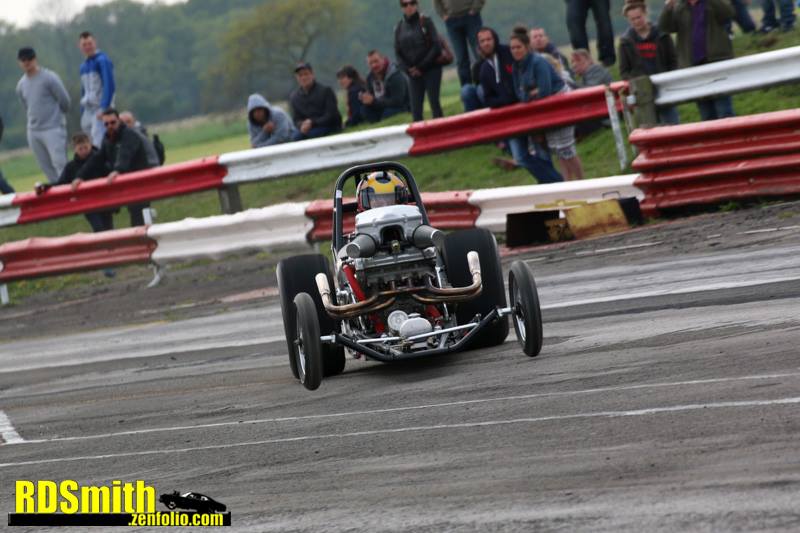 After running the video of Team Pat Van Racing’s miniature, motorcycle powered slingshot running down into the 10-second zone at England’s York Raceway, we reached out to Tom and asked him for more information on the dragster and how exactly the team has taken it from a cool 12-second runner to a blazing, sideways, truly slingshot acting 10-second rocket in a pretty short span of time. A combo of traction, more horsepower, and more driver seat time has led to the team’s crazy pickup in performance and Tom tells us all a bout it below.

This is a pretty awesome read with lots of great photos and information about the car. We really think that Armitage and his team are onto something with this car and we hope other people decide to emulate his design and execution on their own builds. We know that we sure want one! You can load the thing into a pickup truck, it barely drinks any fuel, and it runs 10s. What’s neater than that?!

Hi, Just a little more information for you about the slingshot and the great weekend we had at York Raceway.

The slingshot was built by me (Tom Armitage) and David Taylor. It has a stock 899cc Kawasaki ZX9R motor that produces around 140 hp. We know the exhaust system we have on it now is giving us less horsepower than the stock 4 into 1 system that would usually come on the motorcycle but we decided to go for looks over performance.
Before the Super Street Shootout event at York Raceway on May 4th and 5th we had only managed to get the slingshot running mid 12s, The mid 12 runs were on smaller, harder compound slicks designed for circuit use, We initially went for the harder compound slick for testing, we knew the tire would break loose before something in the engine or gearbox broke.

Before the race meeting we fitted a taller and wider drag slick to help us put power down and we also lowered the gearing slightly to help turn the bigger wheels. 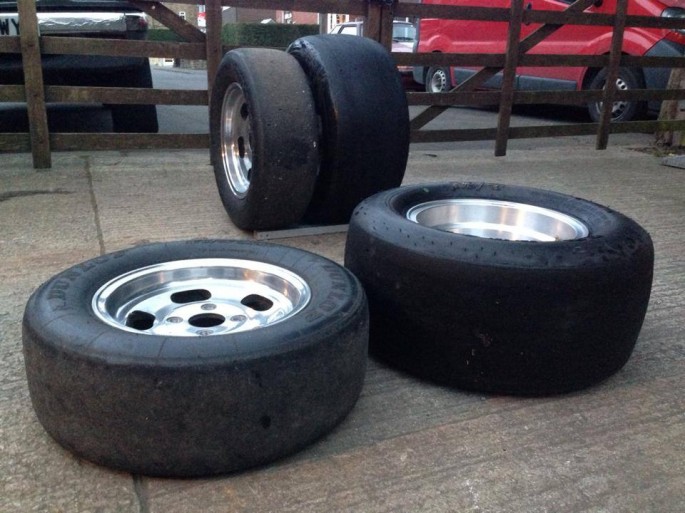 We also ran 108 octane C12 Racing Fuel from VP Racing Fuels instead of the 98 octane pump gas we were previously using. Our biggest gains came from using nitrous. We fitted a Wizards of NOS nitrous system delivering a 75hp shot of nitrous through a progressive controller. The few modifications we made helped me make a low 11 pass followed by a bunch of 10 second passes.

York Raceway has two different surfaces to launch from, It had a glued rubber surface perfect for high powered drag cars on slicks and it also has a shell grip surface that is ideal for your average street cars with treads. As seen in the video in competition and going heads up against another car I launch from the glued rubber surface and the car hooks up and goes in a relatively straight line and on my solo runs I was launching from the shellgrip surface, It puts on a bit more of a show and makes for an extremely fun ride. 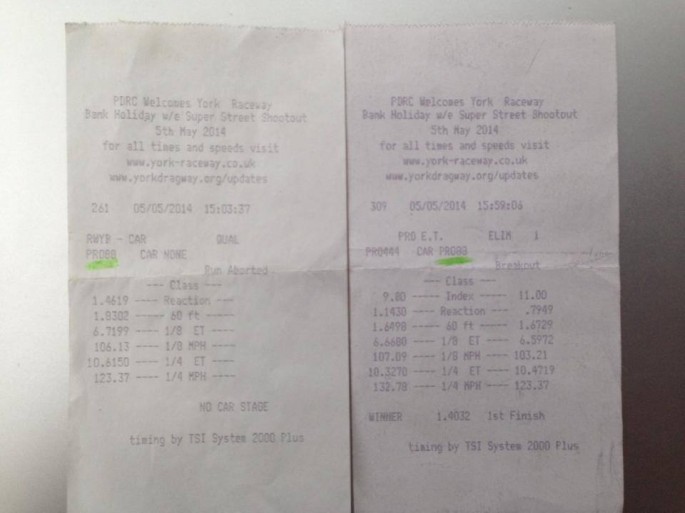 My terminal speeds are identical but I just get a better launch from the rubber.

As I said the car is a lot of fun to drive and I made good use of both lanes even when I was really supposed to just stay in my own lane, I launched hard in the left hand lane and got a little bit out of shape, I was about a 45 degree angle from the direction I had intended on going and I was looking at the spectators and camera man on the banking to the right hand side of the track, I did a few hundred feet in the right hand lane and then pulled back into the left hand lane to finish my 11 second pass. 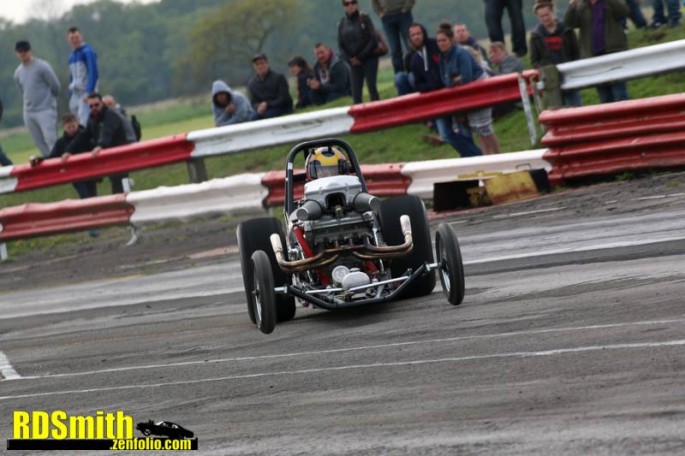 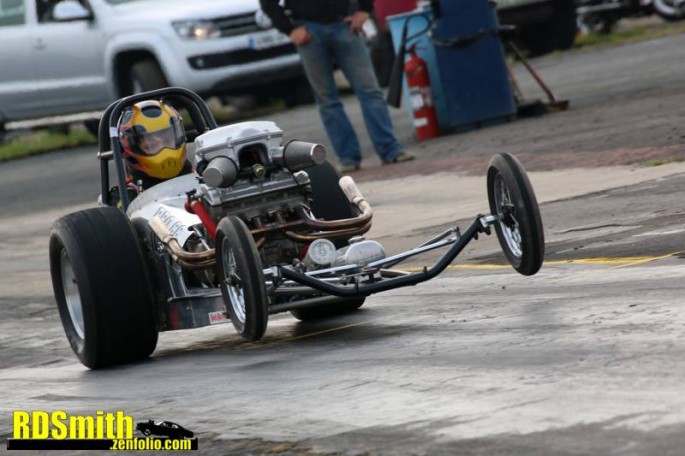 Here are a bunch of photos of the slingshot from the meeting, Some are from Richard Smith, he has given permission to use the photos and it would be great if you post a link to his page. CLICK HERE TO SEE ALL OF RICHARD SMITH’S PHOTOS 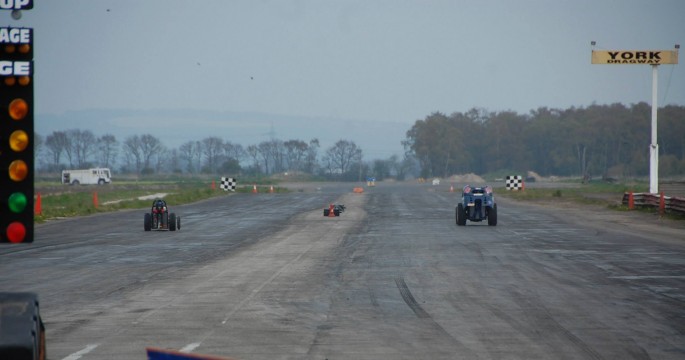 After a fun weekend of wheelies and getting out of shape the only damage I did to the car was one slightly buckled wheel from landing slightly crossed up on the steering.

I still have a lot to learn about the car and how to drive it, Once I learn how to drive it a little better I think we should see the car into the 9s, Every time we make a change to the car it becomes completely different to dive. With the bigger slicks on the back and with the motorcycle engine not having much torque its taking a little bit of getting used to getting it off the line.

It would be cool if you could add a little bit in about York Raceway. Its like a second home to me.
The weekend at York raceway saw a number of PB’s and a bunch on side by side 8 second passes with Andy Fadster running 8s all weekend in his street legal T with a best of 8.24 and a terminal speed of 173 MPH

I would like to say a few thanks to York Raceway for giving us a place to play, our new sponsor Express Bi-Folding doors, Wizards of NOS for the help with the nitrous system and ARC heat for the bottle warmer to get our nitrous up to pressure. Without their support we would still have a 12 second car.

CL Find: This Beat Looking F-150 Has A Twin Turbo 351 And All The Makings Of The Best Sleeper In America Ride With Don Norby As He Hammers A Classic Jag XKE Around Rad Atlanta