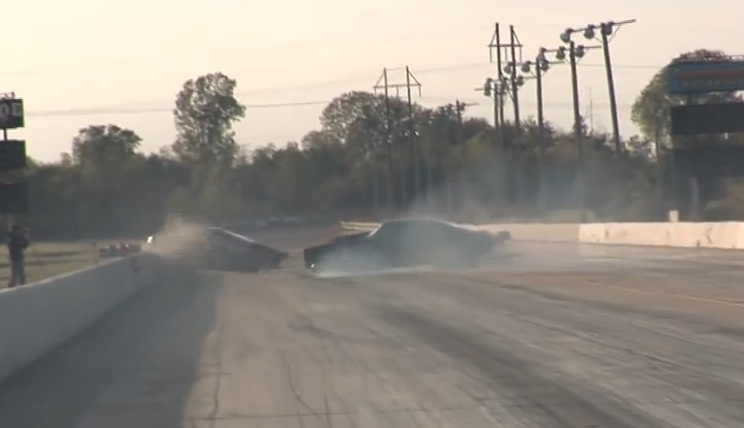 We’re back with more wreckage from the recent no-prep race at Thunder Valley Dragway in Noble, Oklahoma. This time we’re going to see the Hellanor Mustang face punch the wall while the split bumper Camaro from Street Outlaws barely avoids the same fate with the brakes locked up and nothing but prayer stopping the driver from getting a case of concrete poisoning. We talked before about no-prep racing as a means to get street racers off the street and onto the track. We also talked about how guys are putting these super valuable race cars into situations that they couldn’t drive out of on their best day. That’s not an insult to the drivers but rather an observation that these are hardcore drag cars, not pro touring cars. Even if the guy has lightning reflexes and can stay ahead of what the car is doing, he’d still not be able to save it because the car wouldn’t do what he wanted. That’s a fact, Jack.

Both cars get loose at the exact same time and you can watch what happens from there as the wallow side to side before being pulled into the left wall like it had magnets in it.

AWESOME BANGSHIFT APPROVED VIDEO: THE CHEAP ASS CHALLENGE - ICE BRIDGE EDITION Man In Australia Arrested For Driving Wingless Plane To Bar - This Could Be Our Favorite News Story Ever