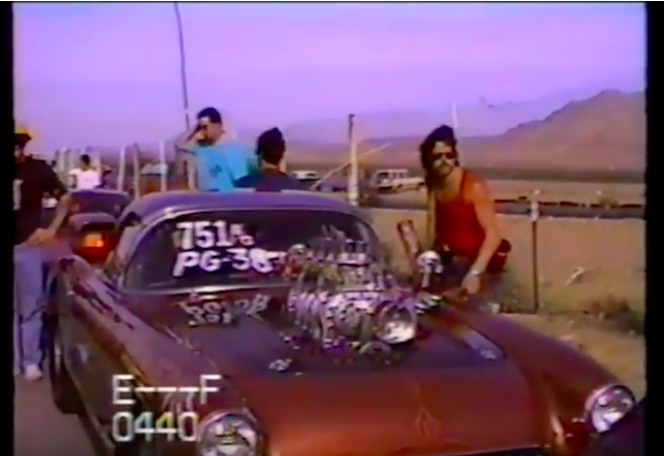 The remnants of the long closed Las Vegas Speedrome can still be found on the property of the sprawling motorsports complex known as Las Vegas Motor Speedway and its associated tracks. The place was the last major strip in the Vegas area before the opening of the super complex that hosts NASCAR, NHRA, World Of Outlaws, and on and on and on. While it may have been short on super track cush, it was long on fun and as you can see, people showed up to have a good time.

In this video we are at the track with a stick shifted, blown, Corvette competing in the Pro Gas category that would spawn the Super Gas division of NHRA drag racing as it got really, really popular around the country. The cool thing about this deal is that there are not throttle stops and there are cars like this Corvette competing which we kind of fell in love with. The crowd can be seen in multiple shots (beers in hand) cheering on their favorite car as they streak down the track. Theses awesome stuff and while Super Gas is a popular and insanely hard form of drag racing, it lacks the flavor that this era of its birth did.

We Don't Know Why But We Like It: This 7-Cylinder Briggs and Stratton Sounds Good! Awesome Miniature Engine Video: Watch This 392cc Air-Cooled V8 Fire Up and Run!