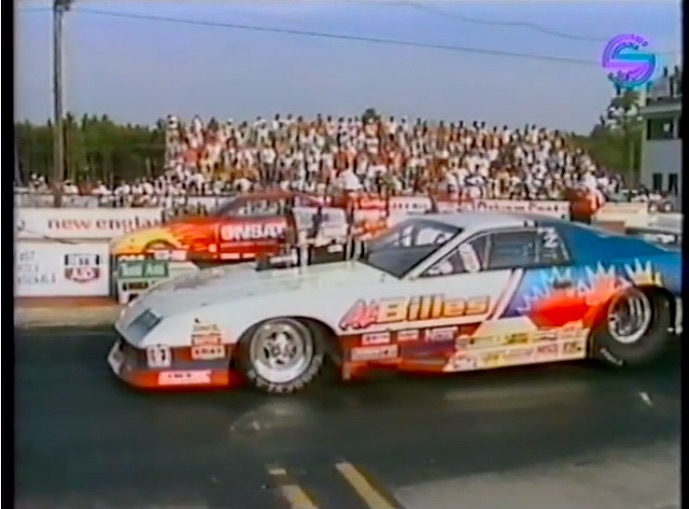 New England Dragway has had an interesting history with its sanctioning bodies. Since September 11th, 1966 the track has been an NHRA, AHRA, and IHRA track at various times. The video below comes from the 1992 IHRA Nitrous Nationals, which was the first “national” event that the track had ever held outside of NHRA National Opens and divisional style events through its recent history to that point. During the salad days of the AHRA the track played host to the Grand American series and did well. During the 1990s though, the track would swap back and forth a few times. It then went on a long IHRA stint until the NHRA came back and that is another story for another day.

This particular race is awesome to watch. The “Nitrous Nationals” featured pro mod, pro stock, and alcohol funny cars. This was not a show the included nitro funny cars or top fuelers but as you can see, the track’s modest sating capacity at the time was full.

Two names stand out for me here. The first is Todd Tutterow and his bright yellow Firebird and the second if Scotty Cannon in his Tommy Mauney buit Lumina. This was the infamous car that used an alcohol funny car body with a door chopped into it and was banned after the one year Scotty used it to crush everyone.

This is an awesome watch and a cool look back at some of the biggest names in the sport at the time and in their future!

FJ45 Rock Crawler Project: Wiring And Hoses. What Could Possibly Go Wrong? Rust and Dents Got Your Goat? OPGI Can Help! Check Out Their RestoParts 1970 GTO Fender Here