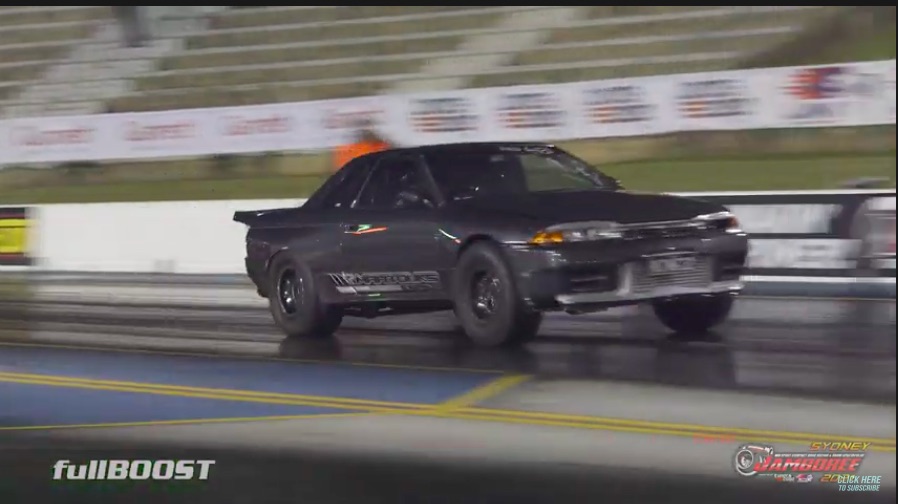 This is about as wild as it gets in our book. You are going to watch two Australian R32 Nissan Skyline GT-Rs rip off six second quarter mile times like it ain’t no thing. They are using properly built Nissan RB series inline six engines to get the job done. While we cannot say if the variation of the RB they are using is correct to the year of the car, we can say that it’s an inline six with all the boost. The Nissan RB engine family is definitely one that doesn’t get the respect of the famed Toyota inliners and there are now modern engines like the Barra and the Atlas, among others that will be trying to make a case for themselves when it comes for all-out inline six performance but that being said, when you watch these cars you will understand that the RB can be a mighty beast when it is built to the hilt.

These cars are all wheel drive and we’re not sure how the manage the torque/power split front to back. It is super heavily biased to the rear as you will see in the burnout part of the run where the back tires are smoking like crazy and the fronts are just hazing a little. Maybe someone can educate us on that program. Is it selectable or is it biased in a way we’re not understanding here.

There’s not a lot of tubing in these cars, meaning for a roll cage. Hell, one of the cars may not even have one. There’s a very basic cage in the other. Not that we’re trying to sound like the Kermit the Frog tea drinking meme here but we’re not sure it’s in anyone’s best interest to see one of these things wreck at 200 and turn the driver into a piece of origami. It would sure seem like more safety tubing would be an excellent idea.

We love the cars, we are blown away by the performance, and when you run 215mph in the quarter you are making incredible power!

Small Block Wonder: Watch This Supercharged Traditional Small Block Make 1,600hp and 2,000 Lb-Ft of Torque On The Hub Dyno Monaco Memories: Listen To The Greatest Living Formula One Racers On Earth Tell Their Stories About The Monaco Grand Prix

One thought on “Aussie Devils: Watch These To R32 Nissan Skyline GT-Rs Rip Off Six-Second Quarter Mile Times Like Nothing”