Record: Watch The First 250+ MPH Quarter Mile Pass By A Six Cylinder Car EVER – EKanoo Does It! 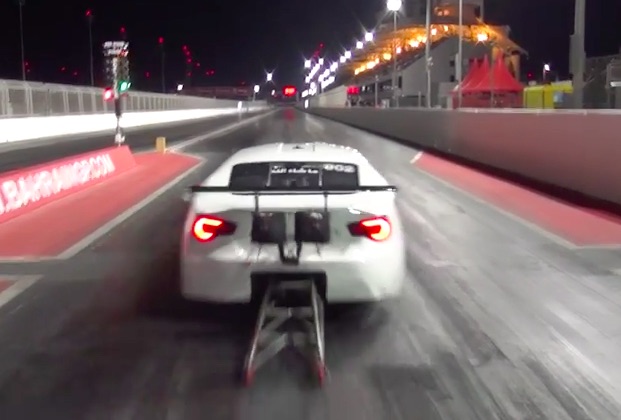 We were alerted to an awesome piece of drag racing history that happened today in Bahrain by Bret Kepner when he sounded the alert that the first 250+ mph quarter mile pass ever made by a six cylinder car was laid down by the EKanoo GT86.

This car is powered by one of the hairiest 2JZ Toyota engines ever built and while we do not know the specifics on the machine regarding weight and other stuff we can tell you that Gary White is the driver and Shane Tecklenburg is the lead tuner on the car. The run was made at the Bahrain International Circuit and while the “GT86” has run into the 5.70s previously, the real story here is the speed.

252mph was the terminal velocity for this car. That’s with power from one of the ultimate inline six cylinder engines on Earth. The sound that this car makes while hauling down the track is something else. Did anyone actually think we’d ever see a day where a six cylinder car would run 250mph in the quarter mile?

What else is there to say? Incredible.

BangShift Project Files: A Root Beer Brown 1972 Buick Skylark Droptop That Is Getting Some Love Epic Troll Bernie Ecclestone Declares F1 'Worse Than It Has Ever Been', Tells Reporters He Wouldn't Pay To Watch

One thought on “Record: Watch The First 250+ MPH Quarter Mile Pass By A Six Cylinder Car EVER – EKanoo Does It!”