No Thanks: Watch Richard Brown In His Rocket Propelled Motorcycle Make A Test Rip On An English Runway 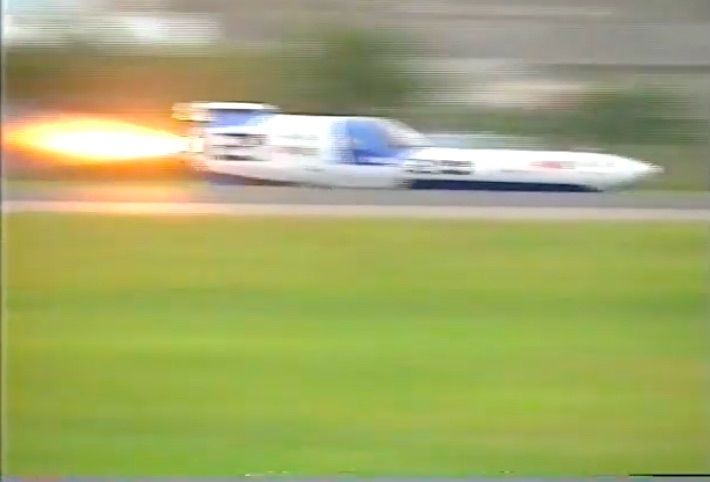 There are so many crazy cars, motorcycles, trucks, and God knows whatever other types of vehicles that have been built which we know nothing about, we always smile with glee when we find another one. This time it is the rocket powered, streamliner motorcycle of England’s Richard Brown. Using a hydrogen peroxide rocket along with what seems to be a solid fuel booster, Brown’s machine was built to run for the ultimate land speed record of motorcycles which stood around 350mph in the 1990s when the Gillette Mach 3 Challenger was built.

This video was part of a British show highlighting the effort and showing the machines to the general public. As you will see, it’s a runner. The little outrigger skis that hold it up, the tow job up to operating speed, and the general claustrophobia of the thing are all wild, but the wildest part? Brown actually took this thing to Bonneville.

Running a peak speed of 356mph one way and a 332.887mph average on the only trip it ever made across the salt, the Challenger did not complete a record return run but it did validate the things that Brown was saying in this video. As wild as this thing is, we give him both credit for design and for guts!

Press play below to see this wild, scary, and really fast creation make a test squirt

Nailed It: The 1993 Dodge Intrepid Was A Car The Company Desperately Needed To Work And It Did Amazing Video: This Fan Shot NASCAR Footage From Bristol 1990 Shows Michael Waltrip's Legendary Wreck

3 thoughts on “No Thanks: Watch Richard Brown In His Rocket Propelled Motorcycle Make A Test Rip On An English Runway”