Awesome Video: Ride Along In A Camaro SS As It Acts As The Spotter Car For U2 Spy Plane Landings! 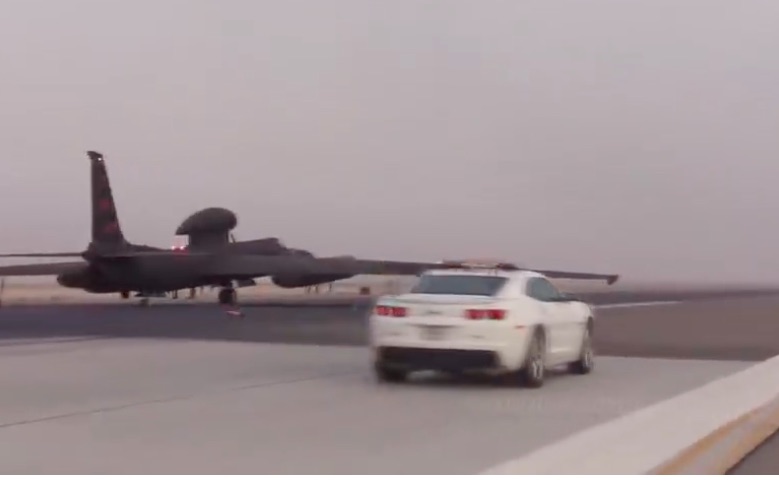 Now this is a ride along we never thought we would see! Since the incredible U2 spay plane has been a part of the United States Air Force fleet, there have been spotter cars chasing it down the runway to help the pilots land. The reason for this is that the plane has almost no visibility for the pilot to judge where he or she is in terms of relation to the ground. As described here the way to land the aircraft perfectly is to use a “two point” style landing and in order to do that, you need to touch the back down and then the nose. The job of the spotter driver is to basically communicate with the pilot when the plane is within spitting distance of the tarmac. That’s the more mundane part of the operation.

The real fun comes in the fact that the driver of the chase car, which is a 2017 Camaro SS in this case, has to come onto the runway at full bore, making a sweeping right or left hand turn at like 100 mph and then maintain that speed, if not increase it to keep with the plane and give the pilot accurate information. How awesome is that!

The neat part of this video is that we not only get the ride experience a couple of times but there’s also a great explanation of exactly why this is the preferred method for getting the planes down safe and sound.

The U2 has been a vital piece of the defense of the United States for more than 60 years now which is astonishing to think about in this day and age of disposable technology. Good planes are good planes and good Camaros are good Camaros. Talk bout a fun mix of work and pleasure here!

Press play below to ride along in a Camaro SS used as a spotter car for the U2!

Tuff Truck All-Star Moments: Watch The Top 10 Greatest Hits As These Tuff Truck Competitors Bring The Pain! Monaco Memories: This Trailer For A Film About The Monaco GP Has Legendary Drivers, Historic Footage

One thought on “Awesome Video: Ride Along In A Camaro SS As It Acts As The Spotter Car For U2 Spy Plane Landings!”