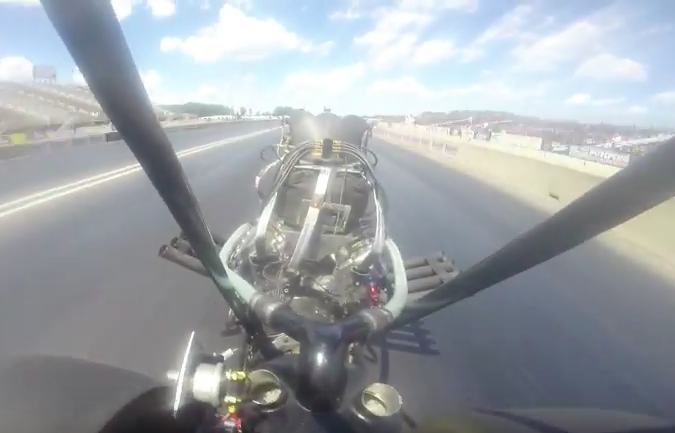 If you are a devotee of the Pontiac brand than you surely know KRE or Kauffman Racing Equipment. These guys are hardcore Pontiac specialists and we don’t mean of the nut and bolt restoration type. We mean of the billet block, crazed racing cylinder heads, and huge horsepower type. They lay claim to having their stuff power many of the quickest and fastest Pontiac drag cars ever and even cooler is that their house car is the world’s quickest and fastest Pontiac powered car. In September of 2014 it became the first Poncho powered anything into the fives and the march continues.

This video captures the car at Summit Racing Equipment Motorsports Park in Norwalk, Ohio. We’re literally strapped to the wing strut behind the blown, ally burning Pontiac engine that will heave this car down the quarter mile in less than six seconds at nearly 240mph and it is a great view.

There may be some nattering nabobs out there who will say that unless the thing has a factory block and heads it is not a “real” Pontiac. We get that but the reality is that their stuff stays with the same foundation architecture that defines what a Pontiac engine is. Even if it does not look like it was plucked out of a 1967 GTO, we’re on board. Remember it was this year when Alan O’Brien went into the 5s for the first time making him the first to clip the zone with an AMC powered car. Lots of his parts were sourced from Indy but on the same line as this, we’re on board. You can bolt that stuff onto a Pontiac, it is a Pontiac. Agree? Tell us below.

One last thing. This engine sounds GOOD! When you hear it really making some thunder down track it has some real hair on it. We are not sure where the guys are planning to run the car next but if you are a Pontiac fan, find out. You don’t want to miss seeing the most awesome beast of the breed when it appears near you.

PRESS PLAY BELOW TO RIDE ON JEFF KAUFMANN’S DRAGSTER :

A Hint Of Truth In The Rumors: Is FCA Actually Going Through With The Jeep Pickup?! Question Of The Day: What Do You Look For On A Roadtrip? From Tourist Stops To Hidden Treasures, We Want To Hear Them!