Ate Up With Motor: The Metronome – The Craziest Car In English Drag Racing History 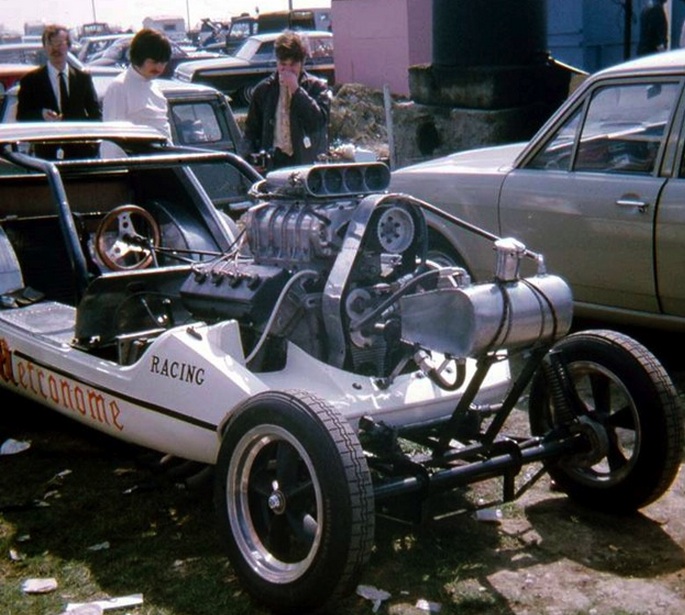 Most people in the USA have never seen or heard of a Bond Bug micro car unless you watch the rebroadcasts of the English car show Wheeler Dealers or you’ve run into one at a museum. A Bond Bug is a tiny two person “sports car” that is powered by a Reliant 700cc engine. Instead of doors, the whole front of the works kind of flips up to allow the driver and passenger ingress and egress. They also have three wheels. Weighing in at a robust 868lbs, they were made in England between 1970 and 1974 with a production run of 2,270…or technically 2,271 if you include the 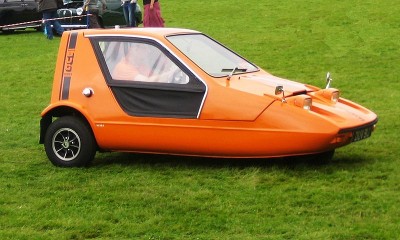 body used on what we think is the wildest English drag car ever built, the Metronome altered. This machine debuted in 1971 and stands as proof to us that our English hot rodding brothers across the pond are at least as nuts as we are. The Metronome looks all the world like a “Zinger”, one of those 1970s half scale cars with a big blown engine sticking out of it, but it was real. The Metronome ran for several seasons, had a couple of drivers, and while a crack English research team drafted into last minute service by us here at BS couldn’t confirm any event wins, they could confirm the fact that the car was good for its fair share of 150mph runs with that big, blown, alky (and occasionally nitro) burning 392ci Hemi hanging out in the breeze up front. So how did this car come to exist? Thankfully for us, there were drag racing journalists in all corners of the globe in the 1970s and one of them happened to be Mike Lintern in England. He documented the build of the car for at least one of the country’s hot rodding mags.

Mark Stratton was the guy who built the car and the guy who apparently walked into the Reliant factory where these cars were made and convinced them to supply him with a body he could use for the project. According to Lintern, they did him one better, crafting a lightweight Bug body that weighed only 35lbs. A normal body built to the actual production thickness? Yeah, that weighed 350lbs! The project was funded by Steve Cryer a businessman and apparent lunatic who had seen other stuff Stratton constructed and wanted in on the action, in the wildest way possible.

The Hemi was filled with parts from the likes of Crower, Mickey Thompson, Schiefer, fired by a Joe Hunt magneto, and slurped down methanol fuel. English drag historian Nick Pettitt told us that he was pretty sure the guys tipped the can by the end of the Metronome’s career and that fuel aided the car in its 150-mph blasts.

One of the coolest things we learned in Lintern’s profile on the car is that the center section of the rear end was moved 7.5-inches off to one side. The engine is actually mounted at an angle to get the transmission aiming in approximately the right way to line up the driveshaft! Apparently this was done to get the driver’s position down as low as possible in the car. The rear suspension was non-existent and the front end was made up of parts from another mini-car, a BMW Isetta among other stuff! A Morris Minor steering rack moved the wheels while the actual steering wheel was fabbed with by Stratton in his shop Hustler Racing. Lintern also reported that the only gauge inside the car was an oil pressure gauge…that’s it. No tach, no nothin’! Hell, judging by the size of it there probably was not room.

The ACA class designation on this car means that it was an “A-Class Competition Altered”.

From the photos we have seen, the chassis reminds us of a cross between an altered and a Logge brothers style funny car chassis. Note the driver’s area that can be seen in a couple of photos. The bars coming up and over have that early flopper style to them and the driver’s position between 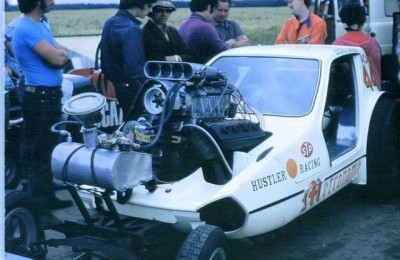 the big wheel tubs is really something else.

While Steve Cryer was the main pilot of this car, Ed Shaver also drove it (apparently at the end of the 1972 season). It had to have been a nerve-wracking experience because as you can clearly see below, the driver has absolutely zero hope of seeing anything in front of him. Even looking around the engine had to be tough from that position! It took some real brass to drive this car and those two guys did it and as best we can tell, never crashed.

I’ve always had a special fondness for the English drag racing scene. I think that these guys and girls have done lots with far less than we’ve had to work with here on our shores. They were certainly treated as the far extreme in the motorsports world for decades and yet they fought on and to this day they have a vibrant following, serious racers, and the same affinity for preserving their history as we have here in the USA. I can’t wait to visit the likes of Santa Pod someday and share some of these stories in person.

Know what other US website or magazine is going to tell you about cool junk like this? Exactly!

I need to give a very special thanks to Andy Rogers, Nick Pettitt, Brian Taylor, and Jeremy Cookson for helping me get my information straight for this story. These guys are proof that us drag geeks have proliferated to all corners of the globe! It was great to have their input.

SCROLL DOWN TO SEE SOME GREAT HISTORIC PHOTOS OF THE METRONOME IN ACTION!

(I am unfortunately spotty on who to credit these photos to. Donald Cross took a couple of them, as well as UK Drag Racing Forum user Boyzee…apologies for any omissions of credit on these killer old photos) 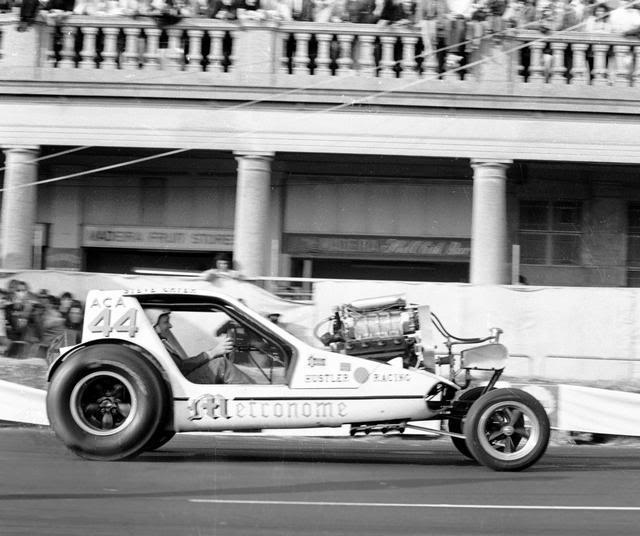 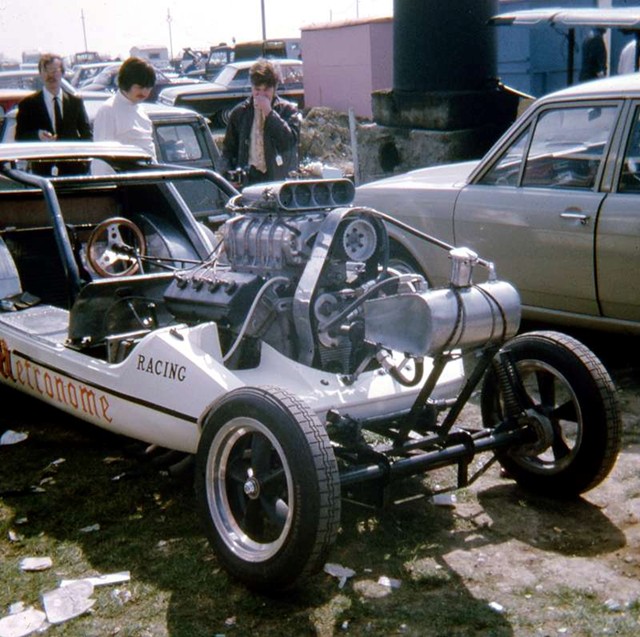 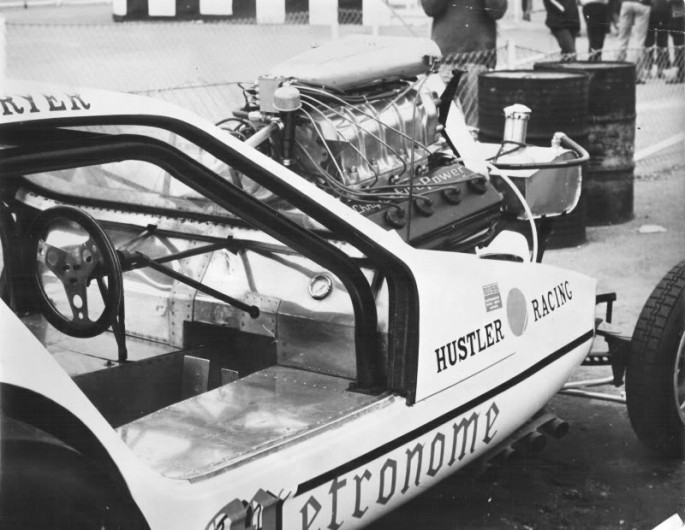 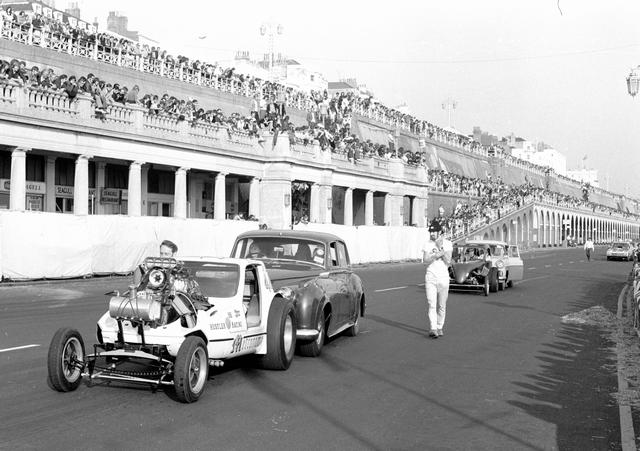 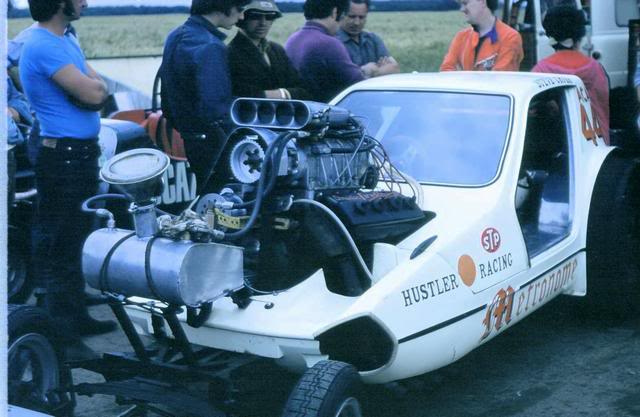 Got A 1966-1967 Chevelle Or El Camino That Needs A New Center Console Base? OPGI Is Making Them! Rough Start: Another Hot-Rodded 1990 Lincoln Mark VII LSC, Complete With A Manual Swap!

3 thoughts on “Ate Up With Motor: The Metronome – The Craziest Car In English Drag Racing History”