Rough Day On The Dyno: Watch This Turbocharged Mustang Blow Up In Fine Fashion 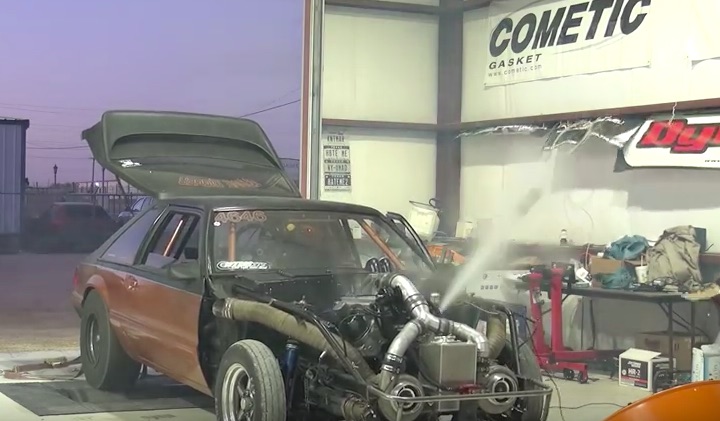 The absolute chained fury that is displayed when a powerful car is dyno tested really needs to be seen in person to be believed. We’re not used to seeing a car working hard and sitting still. There’s a jarring element to it because in every other circumstance we see a car tearing away from us, charging toward us, or moving in some other fashion. The ability to watch the tires grow, to see the car straining against the anchor straps, and to actually hear the engine working as hard as it can up close are all highly intense…especially when something goes wrong.

In this case that “something” is an engine failure experienced by a very powerful turbocharged Mustang. During the top of a pull, there’s some sort of failure that sends lots of pressurized air to places it should not have gone. A breather gets launched out of this engine like it has a rocket strapped to it. You will see it launch as a spec and then come back down and comedically bash the car on the top of the roof. You’ll hear the tires squealing as the emergency brake on the dyno is applied and you will here the clanking and banging noises from the engine as the whole thing grinds to a halt.

The car is owned (according to the caption on the video) by a guy named Andy Wiliabay and it sure looks like Andy left that session with a bunch of work to do. Did it lift a cylinder head? What failed? Anyone want to throw down on a video autopsy?

A New Collection Of Vintage Ads From Drag Mags Of The Late 1960s/Early 1970s BangShift Reader Brawl: What Is Your Favorite Magazine Feature Car Of All Time?