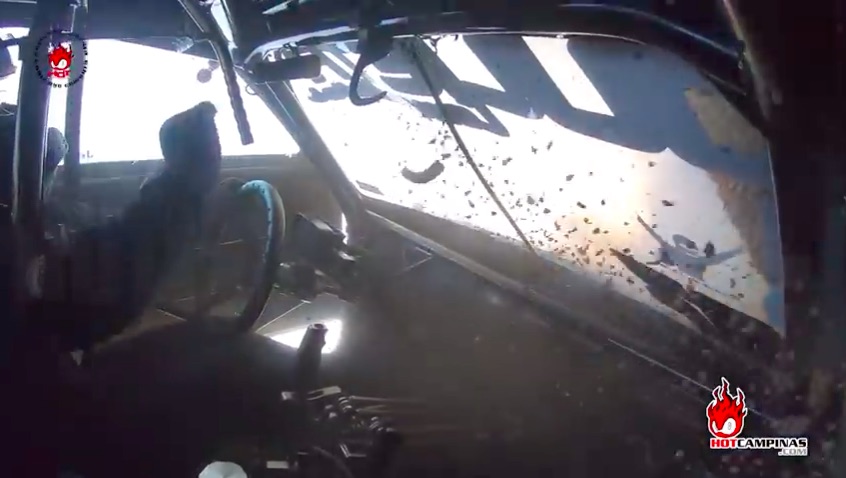 A couple of weeks ago on these electronic pages we told you about the nastiest Chevette that the world had ever seen drag racing down in Brazil. This 2.0L VW powered machine was a real flyweight and could run the quarter mile in the 6-second range and at speeds that verged on the magical 200mph mark. We’re sad to report that the car was involved in a serious wreck at its home track. We’re thankful to report that the driver walked away, though.

As you will see, the car goes on another rip-roaring 6.7-second pass down the track but this time the parachute fails to deploy and the car’s little brakes are no enough to haul it down from the 195mph terminal speed it achieves on the run. The driver does a pretty amazing job with scrubbing speed, even throwing the car into a pretty legit broadside on its way into the sand trap. Unfortunately, as you’ll see, the car goes into a series of pitched rolls and tears itself up pretty hard during the stopping process.

The in-car video of this one is wild. We see the driver on the parachute handle and then we see the work he does with the wheel to try and take as much off the top as he can before entering the sand. This could not have been a good feeling.

Here’s to hoping that the team can get this car repaired and back it sooner rather than later. We’re sure that the fans of Brazil want to see the Chevette Animal back as well.

Wach Trailer Hitches Get Ripped From Under A Truck With Heavy Equipment! Full Pull: Make A Complete Run With The Sudden Debt Fuel Altered At US36 Dragway - Little Track, Big Noise!