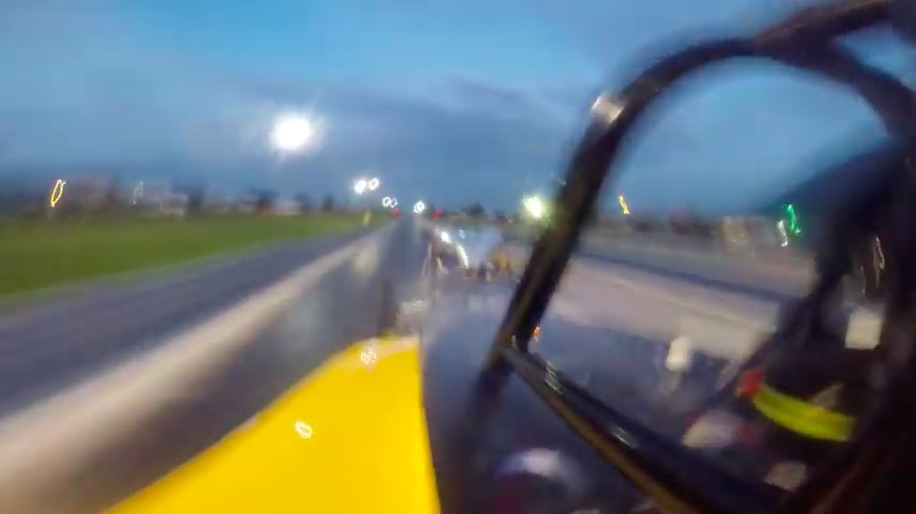 This is a cool video because it takes us end to end on a run with the Sudden Debt (great name) fuel altered as it makes a rip at little US36 Dragway in DeKalb, Missouri. The driver of this car is Bill Seals and this thing is pretty tough customer. It has won the World Fuel Altered Nationals before and regularly cards runs in the 4.0 range and better. These guys run the car frequently and as we’ll see here, Seals, like any good fuel altered driver is not easily rattled by little things such as getting showered with fuel.

The car is equipped with what appears to be a blown big block Chevy engine. We’re not sure how much of the can is being tipped into this car but that’s kind of irrevalent for this conversation, right? This thing makes close to 2,000hp and hustles the eighth mile nearly into the 3s. That’s baller territory especially with the wheelbase of a Radio Flyer wagon.

We like the fire up, we like riding on his shoulder for a LONG burnout and we like the fact that on the burnout you can see some fuel misting out of the left side of the engine. The port nozzles are not really doing much until the fuel pressure rises when the engine comes up on song so at idle, no problem, but when things get to working, that’s when we see the leak.

Going down the track on the run the thing is really pushing some fuel out but Seals hangs with it. We’re sure he was getting some mist because the volume of the leak is pretty good. Not the end of the world but likely not the best run the car has ever made. Of course a potential risk factor here is the thing going lean in that particular cylinder and melting a piston but there does not seem to be any harm done here.

They’ll cinch ’em all down again before the next pass!