Sleeper Video: This 1975 Holden Kingswood Gets It Done In Fine Old Man Style To The Tune Of 10s In Australia 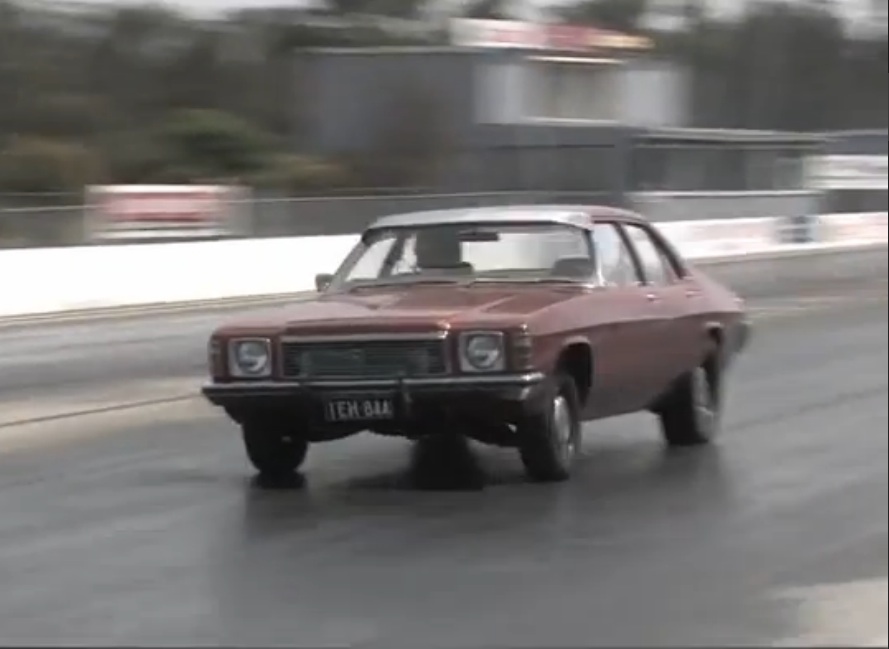 Like the ebola virus, it seems that the LS wave has begun to proliferate on foreign shores. The only good thing is that instead of being placed into quarantine, we get to see YouTube videos of LS powered  stuff, this time in Australia, powering down drag strips to quick elapsed times while looking like something that your grandfather would be cruising to the corner pub. Between the glove box flopping open and dumping old time slips out, the column shifted PowerGlide, the left front wheel lifting, the presence of four doors, and a windshield visor that is the automotive equivalent of a pocket protector, this 1975 Holden Kingswood is just our speed.

We know that there will be lots of people peeing on this thing because of the LS1 engine but let’s just review some stats about this 10-second car that is obviously no flyweight to give you an idea of why people cannot get enough of these engines. Firstly, it is an LS1 which is now the least desirable of the LS family since many versions followed the original 1998 release engine through the years. Despite that, this stock bottom end, stock head, stock cam, and stock intake engine, boosted by a Borg Warner turbo and running on E85 churns out a bunch of 10-second laps, lifts the left front tire, and looks about as fast as a department of public works project.

The retention of the stock hubcaps is a fine touch as well. It seems that the entire hot rodding world in the USA is in love with Fairmonts these days and perhaps this Holden fits the same bill in Australia. Outside of the missing molding on the rear quarter panels, the car looks completely stock. It sounds good but since the turbo is killing lots of the noise, it is not a car that screams, “I run 10s!”

So LS-fever reaches new heights of insanity in Australia and when you watch this car run feel free to tell us why that’s a bad thing.

PRESS PLAY BELOW – TO SEE SOME SLEEPER ACTION AUSSIE STYLE!

One thought on “Sleeper Video: This 1975 Holden Kingswood Gets It Done In Fine Old Man Style To The Tune Of 10s In Australia”