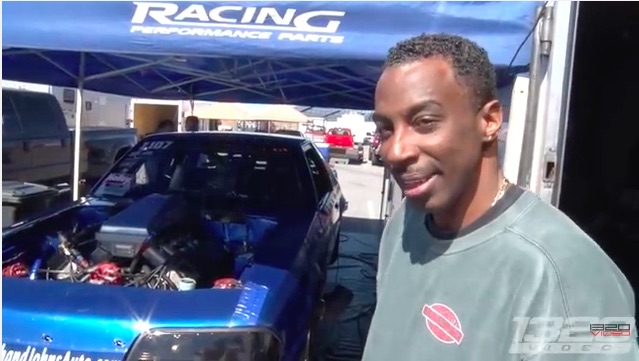 Sad news to report from the world of drag racing as pioneering small tire racer, multi-time NSCA champion, very recent World Cup winner, and highly respected racer “Mustang Mike” Modeste has died. Reports we have fielded say that Modeste passed away unexpectedly and suddenly at his home. He was seen hanging out, talking, and in fine spirits at the PRI show last week in Indy. His 2016 season was a strong one and his career ended with a big win at the Maryland International Raceway World Cup Finals signaling the umpteenth time that he had prevailed over a tough field of competitors. Modeste also proved that he still had the touch by winning the hotly contested Radialfest event at Huntsville Dragway in 2016 as well.

“Mustang Mike” rose to prominence in the early 2000s by competing in and dominating the National Street Car Association series. He won championships in 2000, 2003, 2004, 2007 and along the way was the fourth person to break into the 6s in the quarter mile on radial tires. The guy was at the bleeding edge of the scene from its inception and he was there with a trademark smile and laid back attitude that was likely intimidating to others who did not handle the pressure so smoothly.

Modeste first got a taste for speed street racing in Brooklyn and later graduated to the race track, all the while reading car magazines and becoming more and more obsessed with the worlds of high performance and drag racing. He worked in machine shops as a kid learning the engine building and tuning trade along with working as a highly regard Ford technician at the Manhattan Automobile Company where he specialized in “factory hot rodding” Ford cars with superchargers and other equipment.

His love for the sport was very clear and it was love that ran very deep into his bones. No one races for as long and as hard as Modeste did unless you love it. He had a massive crash at Englishtown in the early 2000s that stopped his NSCA championship streak but eventually it allowed him to return with great equipment and effectively pick right back up where he left off.

Modeste leaves a legacy of kindness, intense competitive spirit, and respect behind him. His hard work helped pave the way for the racing we have today and it was a scene that he not only helped build but was also still at the forefront of.

He will be missed.

PRI 2016 Quick Gallery: The Tool And Machinery Rows - What Other Show Will Have This Kind Of Hardware At Work? PRI 2016: Mark Williams Enterprises Was Chock Full Of The Hardest Core Race Parts On Earth