Snake And Mongoose Available On Demand, On DVD, and On Blu-Ray Now

Good news for those of you that are fans of drag racing history, the Snake and Mongoose movie has finally been released for download, on demand, DVD and Blu-Ray. The move follows the careers of Tom “The Mongoose” McEwen and Don “The Snake” Prudhomme as they progress from talented California racers to national super stars with a landmark deal with Hot Wheels. The film has lots of great historic footage, tons of awesome cars, and is a great tribute to the careers of these two legends.

While the movie was in limited release across the country via movie theaters, it is now available for everyone to own and watch. You can find the film at Wal-Mart, Target, Best Buy, and you can rent it via Red Box or Net Flix. If you’d like to download it, there’s Amazon and other outlets as well.

We’ve seen the flick and it is way cool. If you are a drag racing enthusiast, history buff, or just love cool stuff, we recommend investing the $10 and grabbing a DVD to watch and keep on the shelf!

READ THE FULL RELEASE ABOUT THE SNAKE AND MONGOOSE MOVIE –

LOS ANGELES, April 8, 2014 / PRNewswire / — Entertainment Universe is proud to announce that the action-packed, racing drama “Snake and Mongoo$e” is now available On Demand, Digital Download, Blu-ray and DVD.
“Snake & Mongoo$e,” the incredible true story of the greatest rivalry and friendship in drag racing history, pits Don “The Snake” Prudhomme (Jesse Williams of “Lee Daniels’ The Butler,” “Grey’s Anatomy”) against his longtime friend and on-track nemesis, Tom “The Mongoose” McEwen (Richard Blake of Dragonball: Evolution).From the fiery days of the early dragstrips through the explosive peak of their popularity, these are the triumphs and tragedies behind the legendary races and the Hot Wheels partnership that created a global phenomenon and changed motorsports forever.

Featuring a soundtrack that includes some of the most notable artists and anthems of the time, including Elvis Presley’s “Spinout”, ZZ Top’s “I’m Bad, I’m Nationwide,” and Blue Oyster Cult’s “Don’t Fear the Reaper”, “Snake & Mongoo$e” perfectly captures an iconic era while dropping viewers into the heart of the 1960s and 1970s.

Giants like 16x NHRA Funny Car Champion and Racer.com’s Racer of the Year, John Force said about the film – “It’s not just their story, it’s all our stories.”  Car aficionado and International Hall of Fame Inductee Billy F Gibbons of ZZ Top said, “It’s one of the most authentic and moving – in every sense of the word – racing films ever made.”  Moviereporter.com said “It’s more than a racing movie.”

In addition to edge-of-your-seat racing thrills, Snake and Mongoo$e touches on the inspirational and heartwarming tale of how Prudhomme’s and McEwen’s wives and children were affected by their struggles and successes. 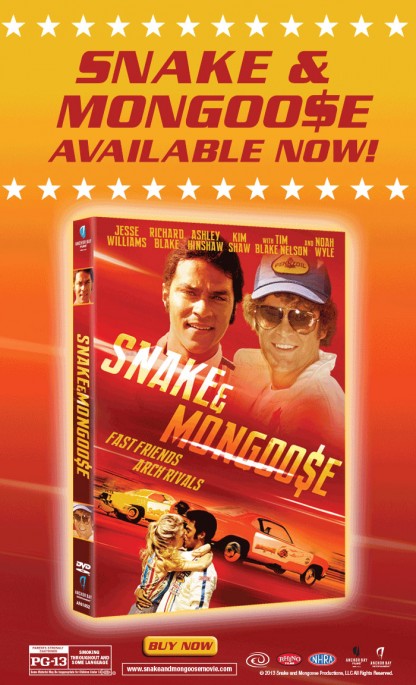 2 thoughts on “Snake And Mongoose Available On Demand, On DVD, and On Blu-Ray Now”