Southeast Gassers Photo Action! Check Out This Race Coverage and All The Killer Cars 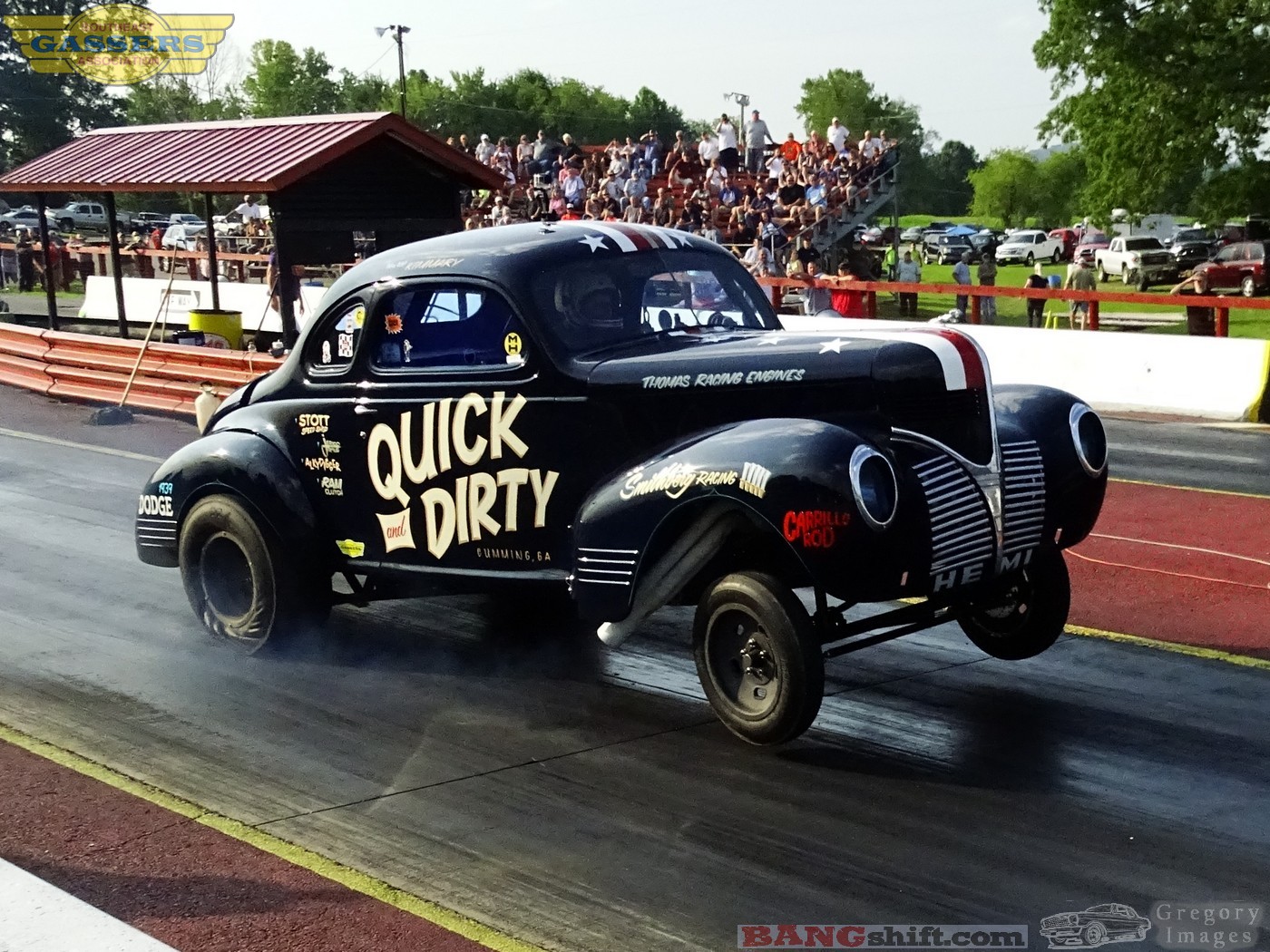 (Words and photos by Doug Gregory) – The South East Gassers visited Kentucky for the second time back in August of 2017.  Why am I just now putting this out there…?  I was attempting to gather as much information about the cars and drivers as I could.  Definitely a task easier said than done.

In this first installment we’re going to cover A/Gas.  That runs a 2300lb minimum and 6lbs per cubic inch of engine displacement.  Run quicker than 5.799 and they will weigh you for compliance.  There is a 50lb break if they run iron heads and 150lb break if running mechanical fuel injection.  If folks want to protest another car the cost is $300 to pull a head (except for the SOHC).  It’s $100 to pump a cylinder to determine actual displacement.  There’s a $50 fee to weigh them.  The officials can and will check for compliance at any time.

The racing was wild and no one left anything on the table.  We saw thrashing in the pits, wheelstands, and some crazy antics down track.  When the smoke cleared Donovan Stott took home the win with the White Trash ’48 Anglia.  A/Gas finals are the last pass down the track at SEGA events and this lets the winner drive back up the track to salute the fans.  This is also good time for a photo op as fans flood the staging lanes to see the trophy presentations.

Below is some information I have on the cars in order of appearance:

Sonee Hall’s brilliant metallic copper ’51 Anglia ‘Sunshine Express’ is powered by a 427 backed by a T101 sending twist back to a Ford 9”. Always good burnouts and wheelies from this beast.

The Boogie Man is Chris Dunn’s ’63 Chevy II that always puts on a great show including the front wheels cranked right on the launch.  It’s no shock this is one of the crowd favorites.

Skairlane is Jeff & Amada Jacobson’s ’55 Ford boasting a Ford 427 Cammer, G-Force trans and 4.56 cogs in the Ford nine-inch.  With a sound all its own this thing makes some serious steam on the top end.

Gabriel Burrell’s ’63 Falcon Southern Flyer was doing just that.  The not-so-small-block Ford turning the Hightower top-loader was getting a workout with 2nd and 3rd gear wheelies and even a close call with the spectator side wall.  If you think this is a ‘just a show’, you couldn’t be more wrong.  When the doors close and the engines start the battle is ‘real as it gets’(TDW).

Quick-n-Dirty is Tony Turner’s ’39 Dodge sporting some colorful paint, a Hightower top-loader, and a 392 Hemi.  It is always a threat to win and who can argue with repeated wheels-up launches.

Gary Cline’s 427 big-block Chevy-urged ’41 Willys seems to just go about its business on track.  A little burnout, big wheelstand then it goes straight from point A to point B.  The Tazmanian Devil is definitely one to watch.

The Grand Illusion ’41 Willys is likely well-known by the BangShift faithful.  Quain Stott’s beast was formerly called the Executioner before the fancy paint appeared.  Quain’s dedication to presenting the best period-correct show he can is unwavering.  This car looks and performs just as all of would hope the cream of the crop did back in the day.

Barry Lynn brought out his ’65 Malibu Lil Red Wagon out to play with a tidy 427 big-block.  It will repeatedly carry the front tires to the 60ft clock or beyond.

I have virtually no information on Ben Christopher’s yellow-ish Anglia that put on one heck of a show.  The dry-hops sent the nose high and the passes were quick as any we saw.  It’s got a clean look and we expect it to put some event wins up soon.

Silver Streak II ’58 Corvette is ran by Kenneth Phillips and it would seem he is very focused on getting the win light.  The image of the black line going up the pit side retaining wall is from his right rear tire.  He blipped the throttle briefly to get a handle on it then ran that sucker out the back door like a boss.

Having already mentioned event winner Donovan Stott’s Anglia I will give you the very basics.  327ci of SBC channeling power through a Jericho then planting it through a 9” Ford rear.  It’s good to see younger folks taking the bull by the horns and running with it.  Donovan ran strong the whole 2017 season ending up as the A/Gas SEGA points champ.  Way to go.

This 1972 Mercury Montego MX Villager Wagon TV Commercial Is Hilarious - Who Comes Up With This Stuff? 2018 Detroit Autorama Photo Coverage: More Shined Up Awesomeness From The Motor City