Nova Monster: Steve Spiess Has A 565ci, Twin-Turbo Ford Boss Engine In His Chevy And It Flies – Drag Week Car! 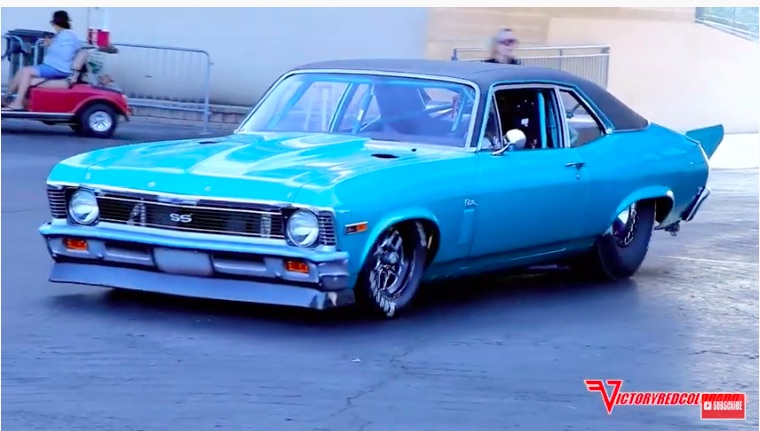 Steve Spiess is a bad ass. In the event you do not know who tis guy is, he’s knocked down championships in the world of IHRA mountain motor pro stock, he has started, grown, and sold companies, and he is an inveterate hot rodder. When Freiburger and I saw his incredible BossaNova sitting in the pits on the first day at Drag Week 2019 we were drawn to it like moths into a fire. The rumors we had heard about the car were all true. The thing is insane. Clean as a whistle, fabricated with a surgeon’s precision, and packing a twin turbocharged 565ci John Kaase Ford Boss 9 style engine, it’s the freaky kind of thing you only see at Drag Week.

Thanks to the VictoryRedColorado channel on YouTube, we now get a look at the car as it was being shaken down at Rt66 Raceway this year prior to drag week. We’re virtually certain that this thing will turn six second elapsed times when it is fully lined out. The engine makes incredible power, the chassis is a thing of beauty, and Spiess never really had the chance to stretch the thing’s legs this year. His Drag Week came to a close early, no based on mechanical issues but due to some heath stuff that slowed down his co-driver and caused them to pack it in for next year. Hey, it’s grueling!

Enjoy this look at one of the finest and most unique Chevy Novas we have ever seen!

5 thoughts on “Nova Monster: Steve Spiess Has A 565ci, Twin-Turbo Ford Boss Engine In His Chevy And It Flies – Drag Week Car!”