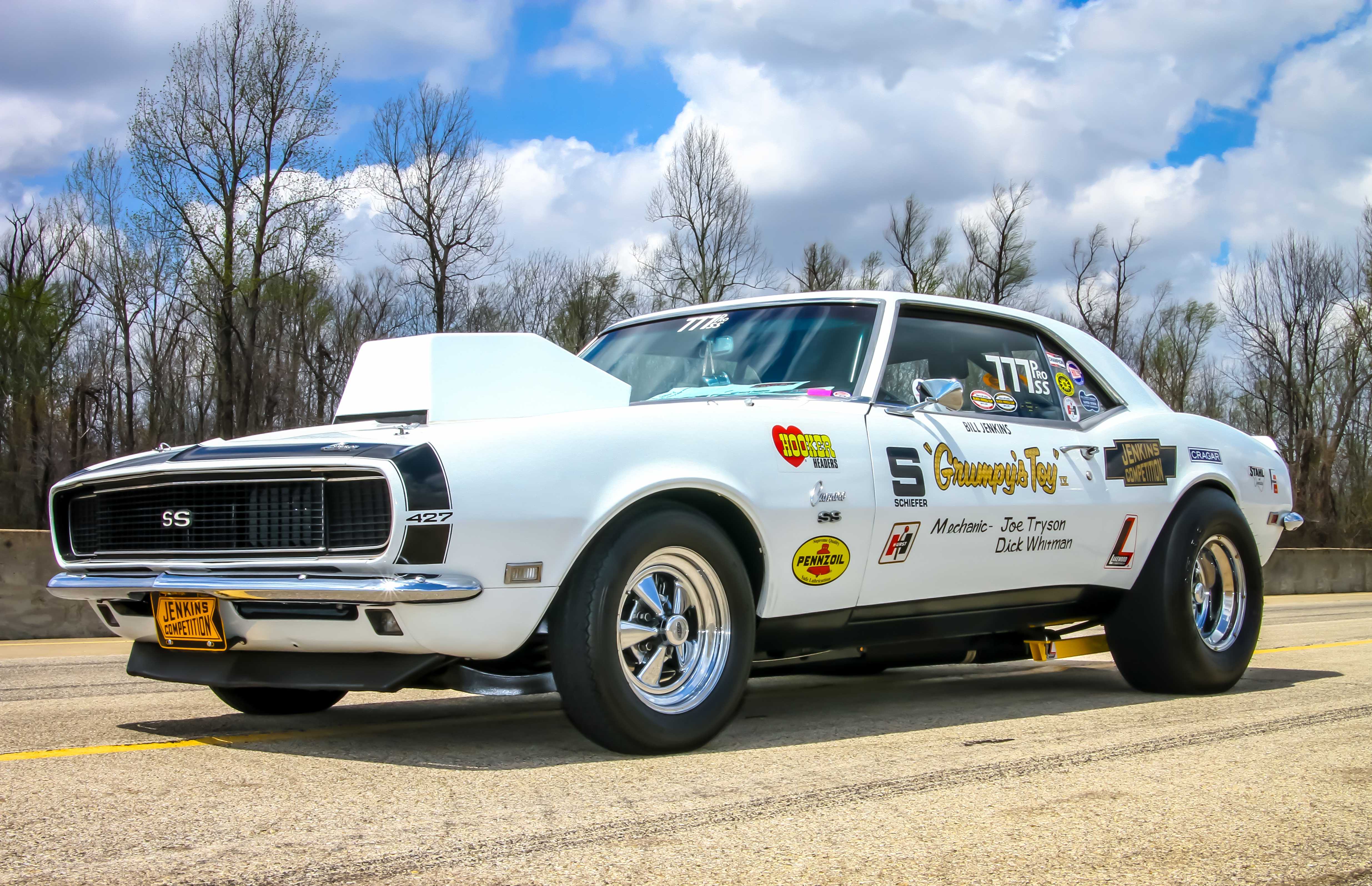 One year earlier, Peters carded a brilliant 0.002 Reaction Time only to lose the inaugural title to Mark Pappas in his 1980 Reher-Morrison-Shepherd Camaro by a mere fifty-six thousandths of a second. This time, Peters scored in the event’s second straight all-Chicago final round by producing a 0.007 RT which allowed the Duster’s 5.27-second, 132.00 mph blast to hold off the Chevy’s quicker 5.19/134.32 by only fifty-one thousandths of a second!

The second running of the race proved the momentum of the burgeoning Nostalgia Pro Stock movement to not only preserve the original machines, (or to build virtually perfect clones), but to wage war with them in open competition, as well. The first gathering was conceived by Pappas after the passing of William Tyler “Grumpy” Jenkins on March 29, 2012, event and it was Dominic and Terri Blasco who offered their immaculate NHRA-sanctioned facility as the site of the initial battle. Pappas also commissioned the creation of the “Black Arrow Cup” trophy named for the infamous “Jenkins Competition” logo emblazoned on Jenkins’ own series of “Grumpy’s Toy” Chevrolets.

In its two editions, the race has attracted an amazing array of restored Pro Stockers representing everything from the original heads-up Super Stock cars presented by the United Drag Racers Association in 1967 to the earliest Pro Super Stocks of the American Hot Rod Association the following year all the way through the first decades of the National Hot Rod Association’s Pro Stock Eliminator. Body styles from the American Motors Concord to the miniscule Dodge Colt have appeared in the NPSA’s format of Pro Stockers through 1981, (prior to the NHRA’s 1982 adoption of an engine displacement limit of five hundred cubic inches). The 2014 field, however, also drew Pro Stockers from NHRA’s post-500 cubic inch period of the 1980s and 1990s. Of special note was the appearance of nitro racing tuner Rick Cassel’s current reconstruction project of Bob Glidden’s all-conquering 1979 Plymouth Arrow.

Once again, the event was attended by hardcore fans of Pro Stock’s glory days many of whom astonished the assembled teams by quoting  chapter and verse from the original Pro Stock rules and whom often knew more about the individual cars than those taking great pains to recreate or restore them. The 2014 crowd included an even larger percentage of drivers and crewmembers from teams which competed in the division’s earliest years including many who raced at the Sikeston track when it was a hotbed of Pro Stock match racing in the late 1960s and early 1970s.

With fantastic, gear-jamming racing conducted in a “Chicago style” round-robin format, the past has a bright future within the Nostalgia Pro Stock Association. Plans for the third annual “Black Arrow Cup” were announced at the 2014 event. 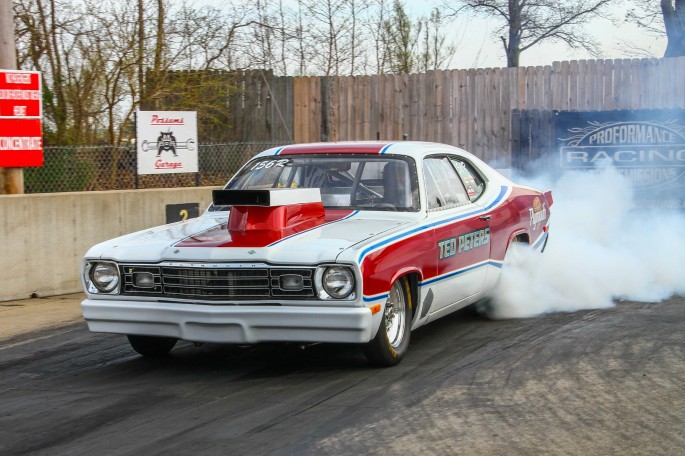 The magnificent 1974 Plymouth Duster of Ted Peters rebounded from a runner-up at the first Black Arrow Cup to win one for the Chrysler fans by a slim fifty-one thousandths of a second. The all-MoPar entry is originally from Colorado and may be the original ride of the late Irv Beringhaus. 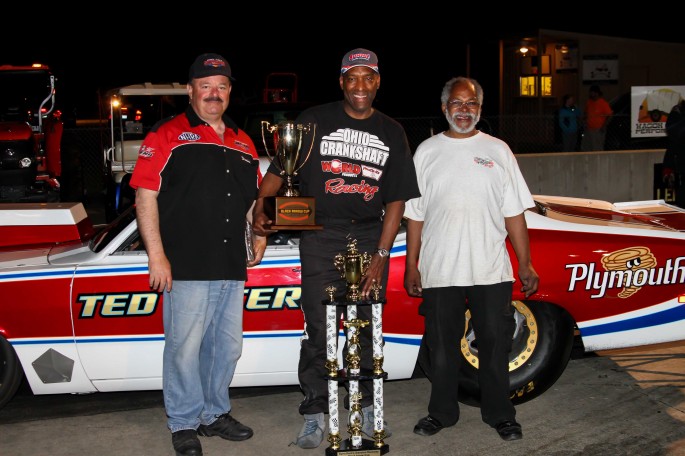 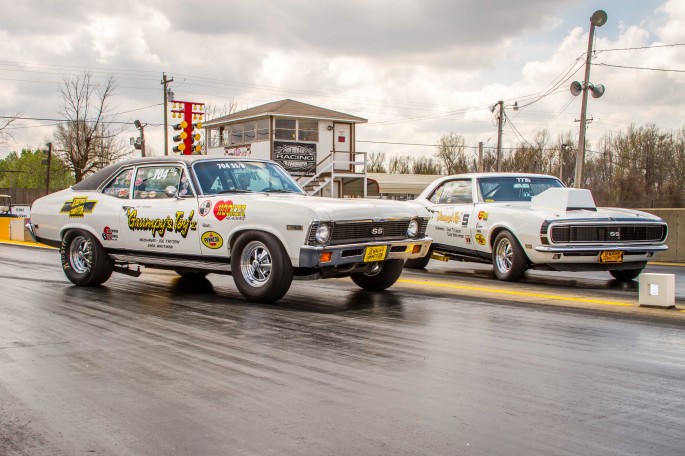 Poised on the starting line of Sikeston Raceway are Bill Jenkins’ “Grumpy’s Toy V” 1968 Nova and “Grumpy’s Toy IV” 1968 Camaro. The L78 396-powered Nova, which narrowly lost the 1968 NHRA Super Stock World Championship, was recently acquired by Sikeston Raceway owner Dom Blasco. The Nova was originally to be Jenkins’ primary entry into the growing heads-up Super Stock wars but “The Grump” elected to concentrate on the 1968 Camaro. 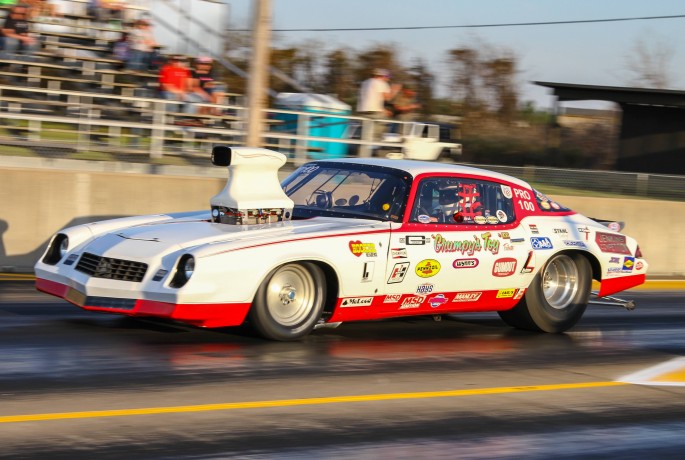 Longtime Pro Modified standout Check Weck jumped in the seat of Mark Pappas’ crowd-favorite “Grumpy’s Toy XVI” 1980 Camaro which was originally handled by Bill Jenkins, Ray Allen and Joe Lepone. In match race trim with an original Formula 5000 road racer air scoop, it was one of the top draws of its time. Weck made it to the final before suffering “death by holeshot” courtesy of Ted Peters. 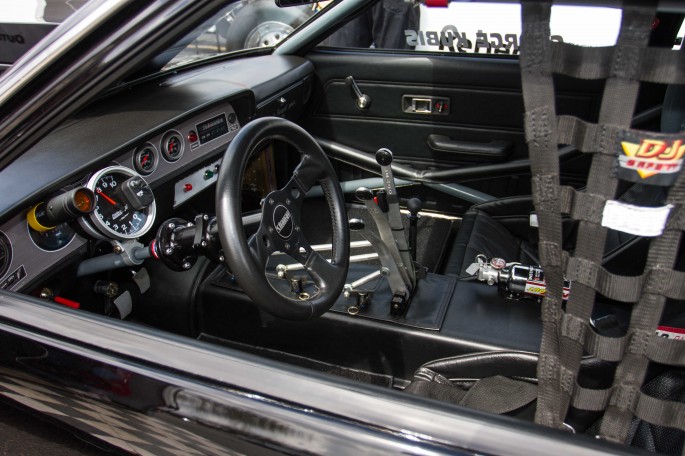 The interior of George Kubis’ Plymouth Arrow shows the astonishing attention to detail incorporated by most Nostalgia Pro Stock teams. The period-perfect dashboard, inner door panels, dual seats and, (possibly, most importantly), the LenCo clutchless transmission levers mark it as a true Pro Stock of the era. 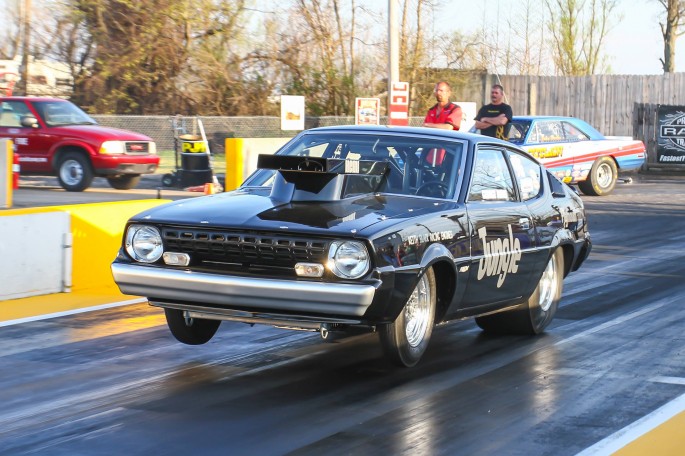 The big-inch Hemi-powered 1978 Plymouth Arrow of “Smilin’ George” Kubis thrilled fans with tremendous burnouts and leaping wheelstands. While its lineage is still being traced, the diminutive machine was originally found in Tennessee; it is rumored to weigh less than two thousand pounds without the driver. 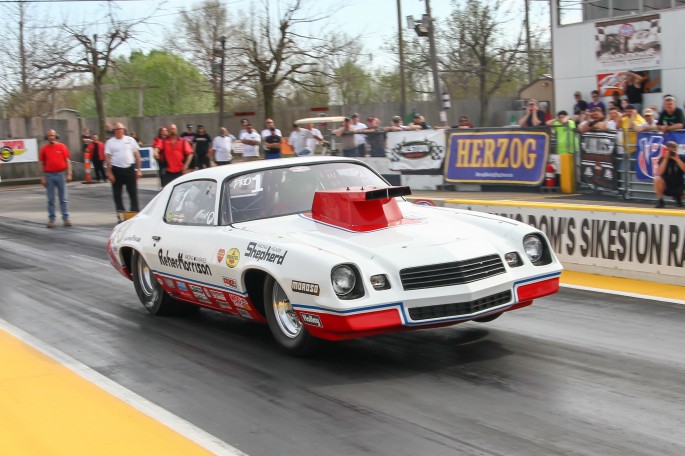 Mark Pappas worked with David Reher to get his 1980 Camaro tribute to the legendary Reher-Morrison-Shepherd team correct to the last detail. Along with a RMS powerplant, Pappas incorporated one of the team’s biggest secrets, a brake pressure switch complete with pressure gauge taken from a forklift, into the finished product. “The decals were placed differently depending on whether the team was racing in NHRA, IHRA or AHRA events with the car”, said Pappas, “and the current layout represents NHRA trim”. 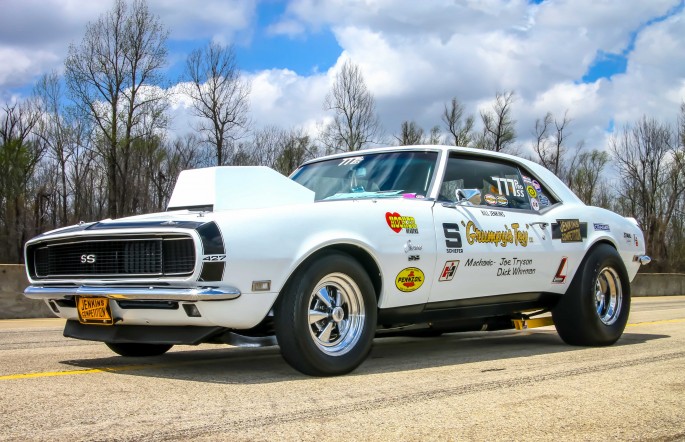 The “Guest of Honor” at the 2014 Black Arrow Cup was the “Grumpy’s Toy IV” 1968 Camaro which Bill Jenkins used in match race and AHRA heads-up competition in 1968 and 1969 before the fabled machine, powered by an aluminum 427 Can-Am Chaparral engine, earned Jenkins the first NHRA Pro Stock title at the 1970 Winternationals, (as well as the second available title at Gainesville, Florida). Although a recreation, it uses several pieces from the original car including the carburetors. No less than five original or reproduction Jenkins machines have attended the two Black Arrow Cup events including the perfectly-restored “Grumpy’s Toy X” 1972 Vega. 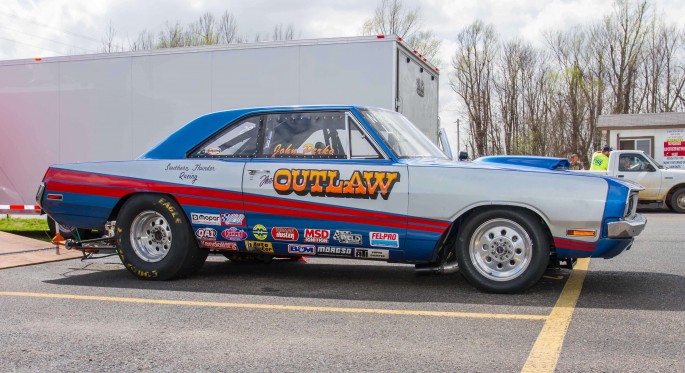 Many fans would be surprised to learn there were several competitive Dodge Dart Swingers in the earliest days of Pro Stock drag racing; Bob Lambeck drove the best-known example for the late Dick Landy. Missourian John Perko’s “Outlaw” is a classic example of the spirit within the Nostalgia Pro Stock contingent. Spending almost all his time and money to create an accurate representation of the era just before fiberglass body panels and tube chassis changed the class forever, Perko recently completed a magnificent original 1972 MoPar Pro Stock induction system on his Dart and was rewarded with a win light in the early rounds of the 2014 event. 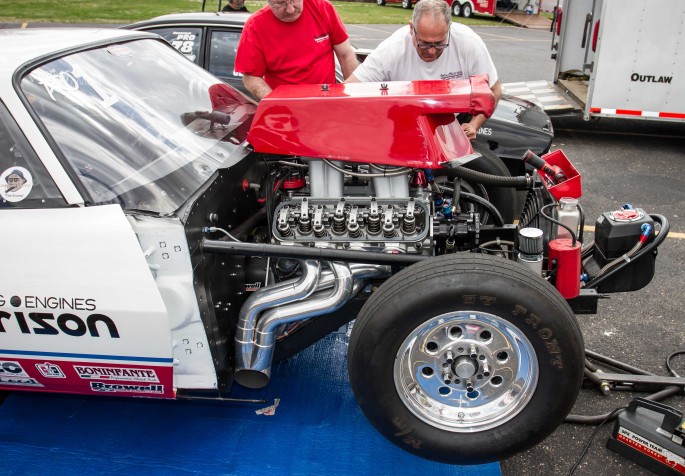 Don’t think pit thrashes aren’t a part of Nostalgia Pro Stock competition. Mark Pappas’ crew dives into their 1980 RMS Camaro between rounds in an effort to gain any advantage to WIN. 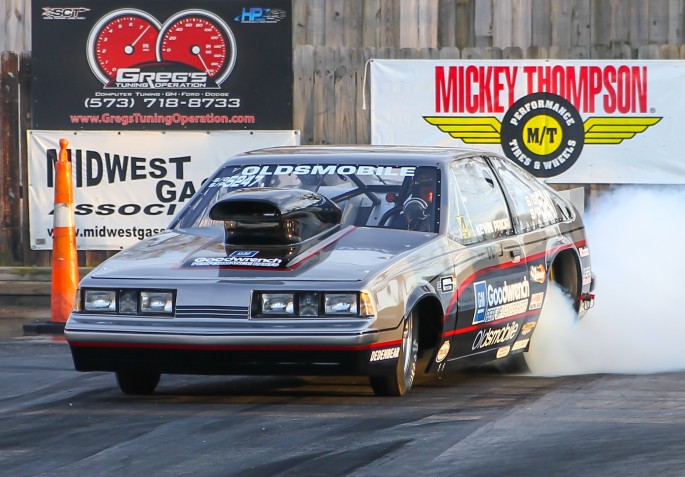 Kevin and Maria Prior barely finished this spectacular tribute to Warren Johnson’s GM/Goodwrench Oldsmobile Firenza in time for the 2014 Black Arrow Cup and the car drew raves in its debut. Originally built by Tommy Mauney in 1989 as a virtual copy of WJ’s 1986 Don Ness model, the car was campaigned as a Competition Eliminator entry by Jerry Wilkerson before being updated by Jerry Bickel Race Cars when it became Paul Tracy’s Top Sportsman entry. This no vinyl wrap; Tony Lorenz perfectly recreated the paint scheme carried by WJ’s 190 mph record-setting rig in 1986. 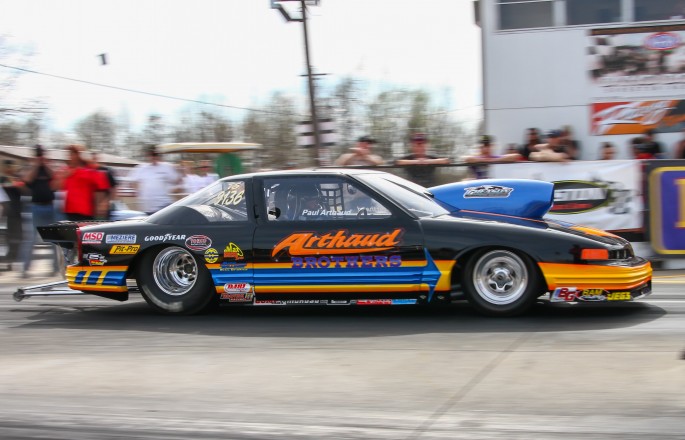 Not much restoration was needed for the Arthaud Brothers’ machine. Still in the original paint from when it was campaigned by Arizonan Gordie Rivera with sponsorship from Atsco Power Steering Equipment, Paul Arthaud now pilots this Willie Rells-built 1993 Cutlass as a rolling example of NHRA Pro Stock racing two decades ago. 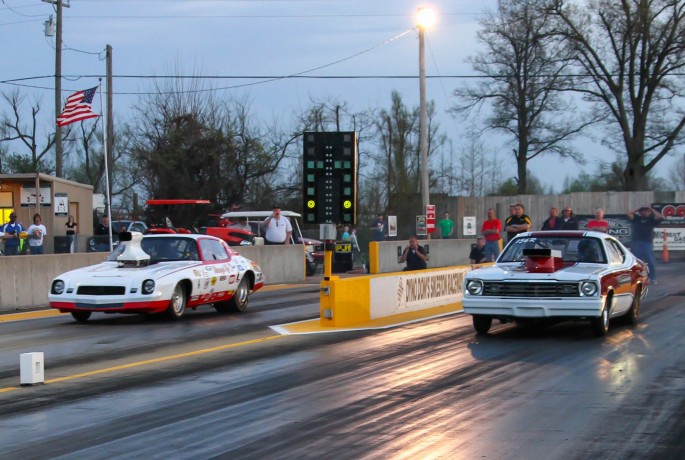 The monstrous holeshot by Ted Peters, (right), was clearly evident at the Christmas Tree as the MoPar driver gouged out the eyes of opponent Chuck Weck in the final round and held on to win, 5.26/132 to a losing 5.19/134!

This Soap-Box-Driving Hippie Can Out-drive You Holley National Hot Rod Reunion 2014 Coverage: 30 Of The Coolest Engines We Found At Beech Bend