American Powertrain Parting Shift: 1961 Ford With A Four Speed On The Column?! Most Controversial Linkage Ever 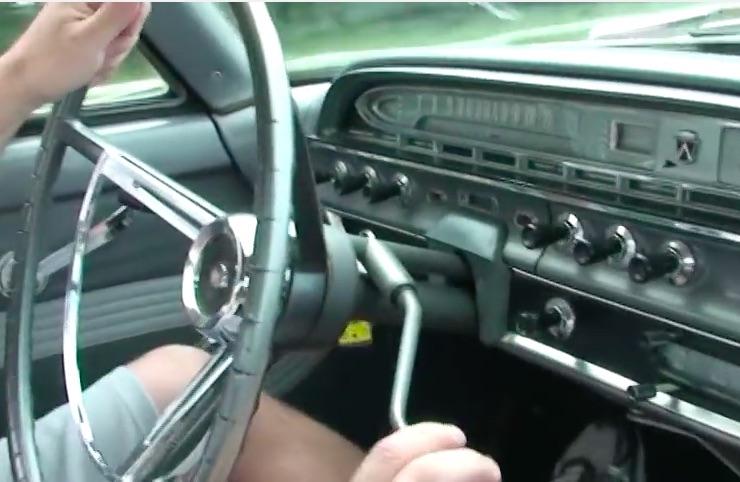 There’s nothing like a good internet fight between automotive experts, right? The reason is that there are guys who know a lot and are proud that that know a lot. So proud that they cannot help but tell everyone that they know a lot. When something comes along that these people do not know about it is like the Titanic hitting an iceberg. There’s all kinds of confusion question of the facts, and denial that the situation is even possible. Such seems to be the case with the wildly neat 1961 Ford Fairlane below. The car is equipped with something apparently no other Ford car ever was and that is a four speed on the column manual. There were versions of a “four on the tree” offered at later days on Ford vans but never in a car…or did they.

Judging by the tone of the guy in the video which I stumbled upon I got the impression that it was made to shut people up. Just the way he closes the thing out seems like a verbal middle finger to someone, right? That got me to hunting around the internet and sure as pie, this video is a source of great controversy between Ford enthusiasts and experts. The lever under the dash to engage reverse seems weird as far as something an OEM would do, even in the early 1960s but other than that, how it is possible that this isn’t a factory piece?

Someone could have modified it along the way for sure but with it being a (claimed) factory 401hp car, it seems insane that someone would hack it up. It would be beneficial to see under car and under carpet footage of this thing but since that does not exist, it is time to speculate wildly, right?

After watching this short clip it is no surprise or shock that George Hurst made a literal fortune selling floor shift conversions that immediately made people quicker and faster at the drag races. Could you imagine trying to steer and do this in a car with some horsepower?! It is incredible to think about someone trying it but guys did (not necessarily with the four speed freak but with lots of 3-speed manual cars in the years before floor shift conversions became the norm.

So let the debate rage on. Factory? Aftermarket? An elaborate hoax? You decide!

Press play below to watch something that most say is impossible – four on the tree!

More Transmission Choices For Corvettes! New Pro-Fit TKX 5-speed Systems For 1955-82 C1, C2 and C3 Corvettes EFI With The Classic Looks Of A Carb? The New Terminator X Stealth 4500 And 4150 Allows You To Keep The Look But With EFI Tuneability

10 thoughts on “American Powertrain Parting Shift: 1961 Ford With A Four Speed On The Column?! Most Controversial Linkage Ever”