The Parting Shift: Ride Along In A G-Force Transmission Equipped 1966 Bel Air At Island Dragway 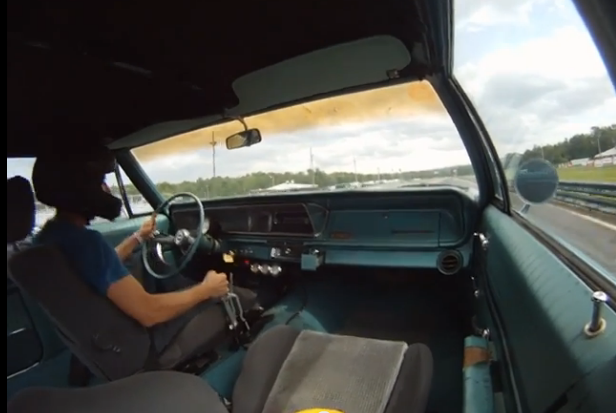 Here’s a pretty straight ahead and cool Parting Shift video. This one features a ride along with the driver of a 1966 Chevy Bel Air at Island Dragway in New Jersey. We don’t have a lot of details on the car other than the fact that it runs a 5-speed G-Force transmission and the kid driving can hammer the gears pretty well. It isn’t the fastest thing around as the car runs mid-12s but that doesn’t make it any less cool. Whatever the engine is, the dude isn’t interested in pulling big revs with it as he seems to be making his shifts somewhere around 5,000 RPM if our “ear tach” is calibrated correctly. Mild big block or small block build to make as much torque as possible? Because he uses all five cogs in the span of this quarter mile run, we think that the car probably has some pretty steep gears in it. That gearing helps to get the big girl moving.

We dig this video because the car is what we’d consider something any BangShifter could own. It isn’t a 10,000 RPM competition eliminator machine or some type of hyper expensive vintage road racer, this is a mid-12 second car that the dude probably built himself with a bad ass transmission that looks like more fun than a barrel of monkeys to knock through the shifting sequence. What’s better than that?

PRESS PLAY BELOW TO SEE THIS 1966 CHEVY GET RIPPED THROUGH THE GEARS AT ISLAND DRAGWAY — WHAT ENGINE DO YOU THINK LIVES UNDER THE HOOD?

9 thoughts on “The Parting Shift: Ride Along In A G-Force Transmission Equipped 1966 Bel Air At Island Dragway”