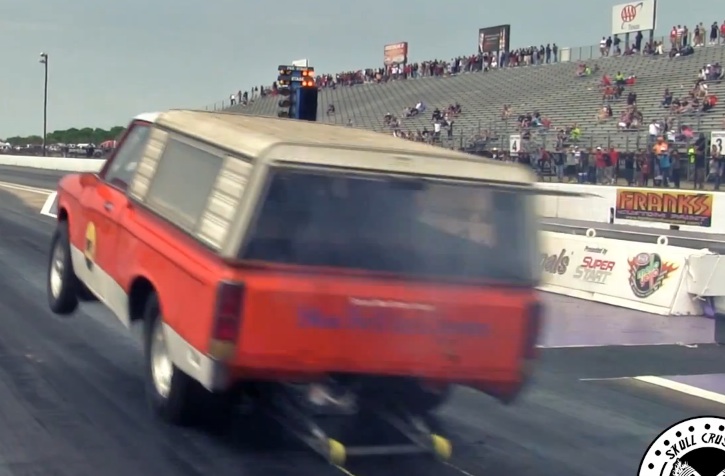 Of all the cool rigs we saw in Charles Wickam’s coverage of the Houston Performance Trucks event at Royal Purple Raceway last week there was one that stuck out and you know the one we’re talking about. That little Chevy LUV truck that was painted to look like the infamous “Farm Truck” from the television show Street Outlaws, but the thing is, this truck is far more than a paint job. Like the scale model engines we show you here on BangShift, this thing is pretty much dead nuts on, right down to the way it leaves the starting line! The big tired, big block, nitrous snorting rig hunkers down on those huge rear slicks, throws the door open on the back of the bed topper and lifts the left front tire a couple feet off the ground!

The fun does not stop there because the truck then waltzes down the strip to the tune of 9.20s at over 140mph! This thing puts on a show and it would be a riot to see the big and little trucks lined up against each other, right? Sometimes stuff like this comes off as lame but we’re 100% on board with the LUV truck, its crusty looking bed cap, and the single digit elapsed times it throws down. Honestly it seems like a handful to drive. The runs you will see in the video show the truck moving around a fair amount as it heads down the track but for the weight and narrow track width of the thing along with the horrid aerodynamics, that’s be be expected.

It would be one thing to have a LUV that was just painted up to look like the real thing and that ran a little small block or something, but to have one that hammers like this? Holy smokes this rules!

PRESS PLAY BELOW TO SEE THE TEXAS MINI FARM TRUCK IN ACTION!

Got A RZR? RacePak Is Brining Cool New Stuff To Market Just For You! Test Your Gearhead Knowledge: Last Week's Mystery Block Identified