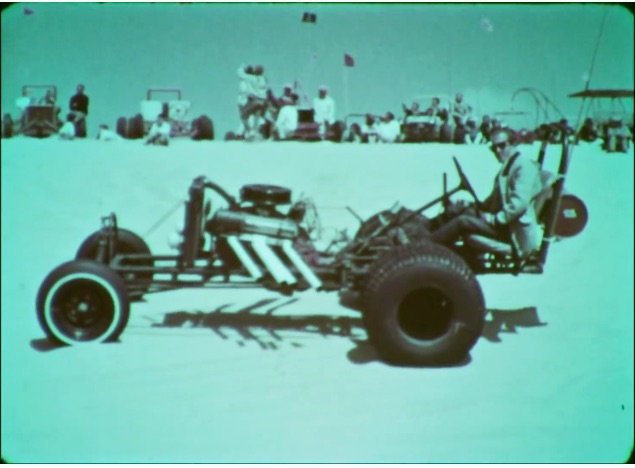 Few films we have ever seen capture such a wide swath of 1960s geared America as this one does. “The Wonderful World of Wheels” was made by “Pete” Petersen’s production company in the 1960s and this was no low-dollar deal. Lloyd Bridges, who was already famous at this point was brought in to host/narrate the film and the on location shooting of go-karts, hot rod shows, concours shows, dune buggies, drag racing, sports car racing, and stock car racing, among other sports must have wrung up a pretty stout bill when making this movie.

We have shown plenty of stock car racing, road racing, and drag racing videos from the 1960s. We have not ever seen the 1960s sand car scene shown like this film does. It shows how big and popular it was, the wild V8 powered and small engine powered buggies people were building and bringing out, kids who are now older adults are shown, older adults who are now long since passed are having a ball.

NASCAR, IndyCar, NHRA, and SCCA stuff is shown along with all of the other car show type elements. The Concours event shown was slightly enlightening to us because we never realized that was a thing people did back in the 1960s like they do today.

No more words. Watch this.

10 Minutes Of Brilliance: This Collection Of Vintage VW Television Ads Is Fantastic Wheelies For Days! Nothing But Wheels Up Drag Racing From Urban Hillbilly!

One thought on “New Year’s Hangover Theater: The Wonderful World Of Wheels Hits Every Aspect Of 1960s Gearhead Life!”