This 1970 Drag Racing Documentary Film Is Awesome And We’ve Never Seen It Before – Total Coolness From A Long Dead Track! 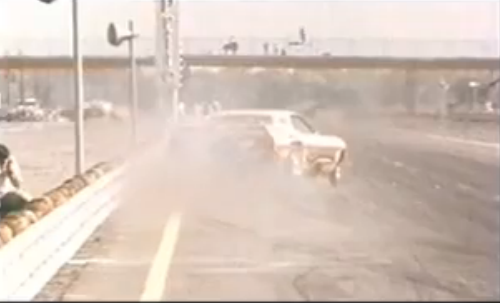 We revel in finding old drag racing footage on the internet that we don’t think you’ve seen before. This video is a prime example of that because we’re going to go ahead and believe you’ve not seen it because we haven’t yet and we’re trained professionals! Filmed at the 1970 NHRA World Finals held at the Dallas International Motor Speedway, this documentary style film is a seemingly educational/PR piece for drag racing and the NHRA. It talks about all the major points that the sport would want to trumpet in 1970. By that we mean, family, factory involvement in cars like pro stock, very fast cars like top fuel and floppers, the “every guy” element of sportsman racing, and on and on and on.

Outside of the coolness of the snippets and interviews shown with regular Joes in the pits, there is a great segment with Sox and Martin that includes interviews with Ronnie Sox, Buddy Martin, and footage of Jake King actually working in the S&M race shop back in the day. In-car footage of a 1970 funny car run (with a funny car that has a legit steering wheel in it), tons of great angles where you can look into a car on the starting line and see the driver dumping the clutch, awesomely named sportsman cars, and on and on. This video legitimately has it all.

One of the other things that needs to be mentioned is the star crossed track that the film was made at. Dallas International Motor Speedway was a full tilt super track opened in 1969. It featured a massive tower, suites, huge pits, and all the luxuries that you would expect at even a modern track. The problem is that only a couple years later the place was out of business after a flood, neighbor complaints, rainouts, and running the already thin wallets of the builders and promoters dry. Dallas was a case of shooting for the moon when a pole vault jump would have sufficed. The track did not need all the bells and whistles that it had and those luxuries ended up being like a cement block around the neck of the place while it was trying to tread water in the financial pool. That movie never ends well and this one was no exception. While the story of the track closing sucks, the video that came out of it is awesome!

PRESS PLAY ON EACH PART TO WATCH THIS 20-MINUTE DRAG RACING MASTERPIECE!

BangShifty Video: This Homebuilt Steam Powered Rail Speeder Is Incredible Snake Venom: How To Get The Most Out Of A 4-Valve 4.6 Mod Motor

One thought on “This 1970 Drag Racing Documentary Film Is Awesome And We’ve Never Seen It Before – Total Coolness From A Long Dead Track!”