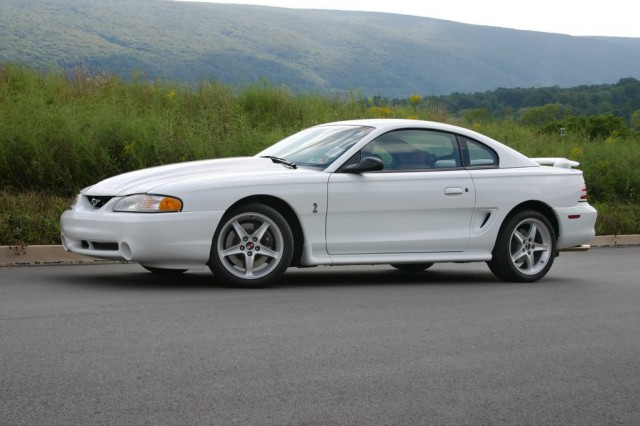 You could spot one a mile away compared to a standard Mustang. Those two large, tunneled fog lights announced the presence of the Cobra, the Mustang that was doing it’s best to be the top of the heap in the early stages of the second horsepower war. It had to battle with the LT-1 powered Chevrolet Camaro and Pontiac Firebird, which were competitive enough. Then they had to deal with the Firehawk and Z28 SS…and it wasn’t a fair fight. Then 1998 came around and the LT-1 was gone, in favor of the LS1. In 1998, nobody could’ve predicted what that engine would do to the automotive scene. Meanwhile, Ford was always scoring second place in a re-hashed Fox body and we haven’t even gotten to the 1999 Cobra controversy that involved lower-than-rated power outputs.

But was all hope lost? Nope. You just had to work for it, because Ford wasn’t going to give it to you all the way from the factory. Over the years, the sounds of 4.6s breathing out of Flowmasters became the calling card for the boy racer. Terminator owners knew what a bit of boost would do to the engine. The potential in the four-valve is there, if you are willing to tap into it. And just look at the market for the non-Terminator cars. Why wouldn’t you give it a shot?

Richard Holdener has some power figures you might be interested in, using a 1997 motor as a dyno mule to test out everything from the short-runner intake manifold trick to nitrous and a Kenne Bell blower. Take notes….then go take names.

This 1970 Drag Racing Documentary Film Is Awesome And We've Never Seen It Before - Total Coolness From A Long Dead Track! Ugly And Unstoppable: This Blazer Is A Study In Gearing, Good Driving, And Zero Effs Given To Looks