This Is What It Looks Like When A Top Fuel Dragster Clutch Explodes – Nightmare! 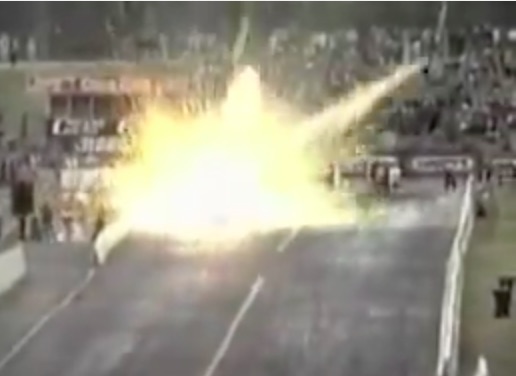 A top fuel dragster is an amazing piece of machinery that when working right can do things in an almost beautiful way. The arching chassis, the huge slicks growing as the car heads down the track, and the blazing header flames belching from the pipes the whole way down are all attributes that ever drag racing fan loves. The cars are also tremendously dangerous as this video proves. Taken at the old Eastern Creek drag strip, the car we’re going to see in this short piece of film belongs to Aussie drag racing legend Graeme Cowin. Cowin made the first four second pass in Australian top fuel history and is truly one of the sport’s greats in that part of the world, but on this day it was a disaster that would literally sear his name into people’s minds.

You’ll see Cowin’s car hit the tire in a pretty weak fashion and almost immediately fire and sparks start to make their way out of the bell housing. Apparently keeping the throttle hammered, the clutch gets heated and spun to major league revs before coming apart in what could be the most spectacular fashion of any clutch failure in drag racing history. While the ground level view is impressive for al the bright lights and stuff, it is the brief head-on video we get that shows just how terrifying this situation was. Why? Watch the 7-8 second clip a few times, especially the end. Those things that look to be heading toward low Earth orbit look like they are clutch discs! Even scarier is the fact that those blazing hunks of steel and friction material had to land somewhere. It seems impossible that everyone at the track left without a mark but we’re not sure.

So if you have ever wondered what a worst case scenario regarding a dragster clutch looks like, this is pretty much it.

Watch Mike Skinner Lay Down One Of The Quickest Runs In Goodwood History Driving His NASCAR Truck! Wild Carnage Video: Watch Aussie Racer Peter Gratz Spit The Entire Rear Axle Assembly Out From Under His Car