Watch Mike Skinner Lay Down One Of The Quickest Runs In Goodwood History Driving His NASCAR Truck! 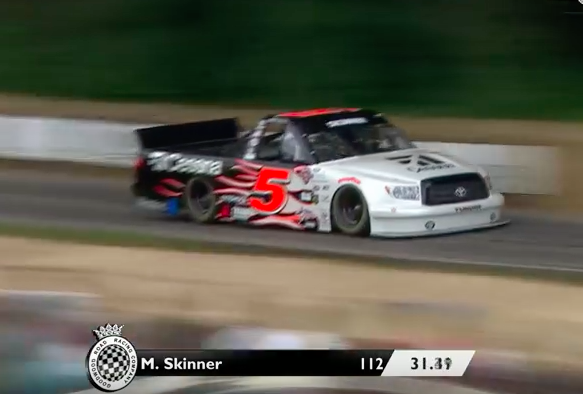 As amazing as the Goodwood Festival of Speed is for the pageantry, the history, the setting, and the collection of cars that show up, there’s another element that can kind of get lost and that is the fact that this is a competitive event as well! It is not just about watching the old stuff amble up the hill. Nope, there’s plenty of modern super cars, hyper cars, and racing machines that are driven quite literally as had as they will go up the hill and American racer Mike Skinner took his NASCAR truck up the hill full bore much to the delight of the English throngs that attended.

Our favorite part of this video is the fact that Skinner was clearly trying to go fast and he did. While he did not end up with the quickest time, he surely ended up with the most entertaining run as his big Toyota Tundra race track was using all of the course to get a move on. Sliding this way and that, flirting with both walls and hay bales, Skinner kept the pedal down and crossed the finish line in just over 50-seconds with a speed of over 130mph. That is rare air by any standard at Goodwood and it took a couple of gazillion dollar machines to get around him.

We’re not ashamed to say that this singular event rests atop our bucket list for automotive fun. We’d give a leg to get over and see the rendition of either this one OR the Goodwood historics. With the huge speeds and massive diversity of equipment at the Festival of Speed, we’d put this event a half a notch higher.

Us Americans have a good history of going over and putting on a good show for our English friends and Mike Skinner did plenty to keep that flame lit!

Cool Drag Video: A Look Back At Detroit Dragway On The Last Weekend Of The 1989 Season This Is What It Looks Like When A Top Fuel Dragster Clutch Explodes - Nightmare!