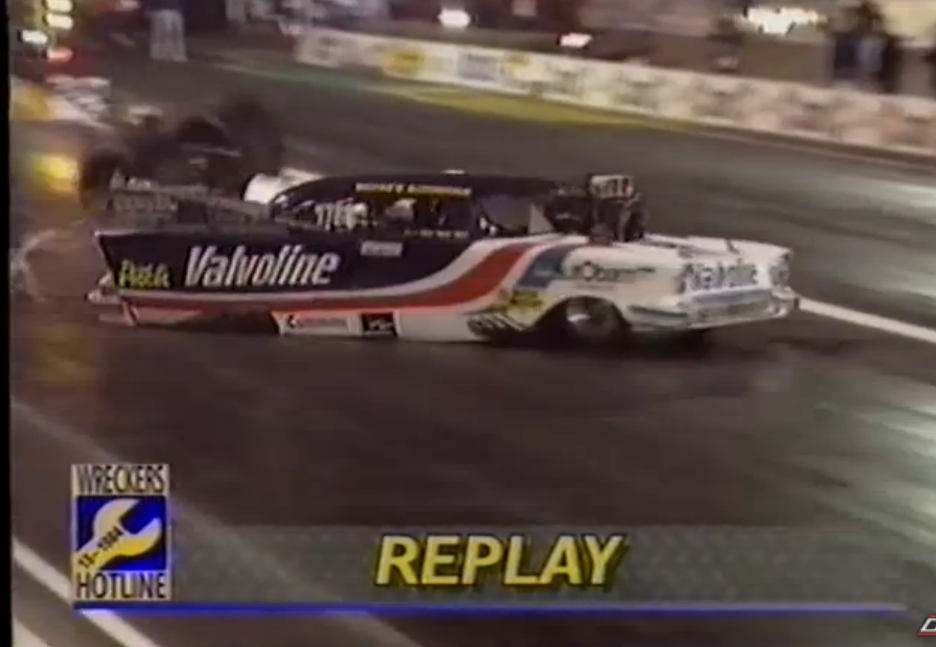 The Australian National Drag Racing Association has a great YouTube page where they post videos from current day races and footage from the era before YouTube. Yes kids, there was an era before YouTube. Anyway, this recently posted video was shot in 1998 and it centers around the wildest run of racer Peter Gratz’s career in the Top Doorslammer class. Lots of people will call this car a pro mod and while it is similar in look, the top doorslammer class is vastly different in mechanics than our stateside pro mods. We’re not going to go on a dissertation about it here but the massive screw blower is the first indication that things were (and are) lots different.

One of the things they have in common is the fact that both styles of cars drive the rear tires and those tires are huge slicks attached to a nearly bombproof rear end. This run was made at the 1998 ANDRA Winternationals and about 330-feet into it the ENTIRE rear axle assembly comes out from under the car and Gratz is reduced to a mere passenger, trying to steer a car that is simply skidding down the course. Adding insult to injury, the Chevy smacks the wall pretty hard at the tail end of it all.

How did this happen? BangShifter Matt Rowaan sent us an email and asked. Obviously there was some sort of major failure back there. Tubing, welds, all of the above? Had the car shaken the tires a lot and weakened the mounting of the thing? Was metal fatigue weakening the car on each and every pass before the whole shebang quit? These are questions we want you to answer below. Take your best shot and play the role of racing engineer, it is easy, fun, and free! HA!

This must have been one rough ride for Gratz. Make sure you watch the full speed and the slow motion replay of this scene go down!

This Is What It Looks Like When A Top Fuel Dragster Clutch Explodes - Nightmare! A New Collection Of Vintage Ads From Drag Mags Of The Late 1960s/Early 1970s

One thought on “Wild Carnage Video: Watch Aussie Racer Peter Gratz Spit The Entire Rear Axle Assembly Out From Under His Car”