…..And Then There Were Three – Andy Frost Releases Plans For His Red Victor And His Hopes To Grab The Record Back 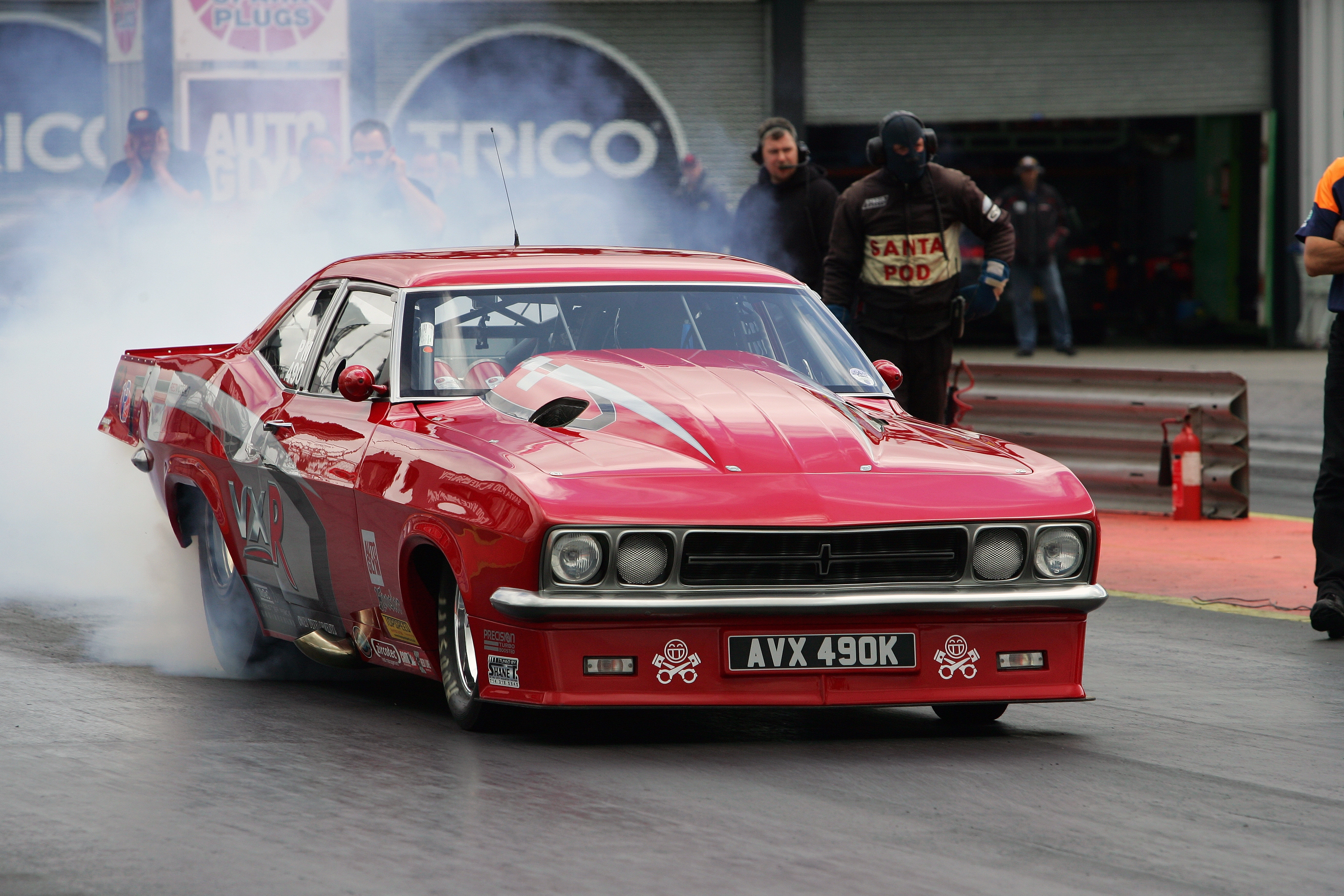 It has been a watershed year in the world of the “World’s quickest” street legal car battle with Larry and Chad’s wild S10 creation running roughshod over the existing records and punching the first ticket into the five second zone with their historic performance at the Street Car Super Nationals X in Last Vegas just a couple of weeks ago which closed the door to the five second zone for the team that opened on drag week with a 6.16 pass that shook the street legal drag racing world to its core.

It has also been an interesting few weeks because Tom Bailey announced that he’s building a new car that he hopes will be capable of running in the range of the 5.50s when sorted. Adding yet another layer into the whole program is the announcement below from Andy Frost and the Red Victor racing outfit who are also going to step up their situation to chase Larson into that mind blowing 5-second zone. Both the Bailey and Frost efforts will be street legal cars with Frost keeping his chassis but essentially gutting the thing mechanically and bringing a more robust engine combo along with a new transmission.

The divergence in approach between Frost and Bailey is interesting and speaks more to the drag racing scenes in the US and England more than anything else. Bailey’s car is going to be legal for competition with the PDRA, the eighth mile drag racing sanctioning body that competes around the country and he claims that it will also have the ability to be made legal for NHRA pro mod competition which Bailey would also like to dabble in. Frost on the other hand is having to abandon the traditional pro mod class where he has recently competed because if he stays within the bounds of those rules he’ll have no shot to compete with the likes of Larson and Bailey. Interesting, right?

We’re most intrigued by some of the timeline and vague sentences nearing the end of the release that mention the car being ready to hit the ground running in the August/September time frame of 2015 (Geee…when is Drag Week held again?!) and the notion that the runs will be made somewhere with a more sunny environment. We’re taking a stab in the dark here but there is a region of the world where it rains very infrequently and they have some awesome drag strips. You do the math on that.

As we have said many times before, this competition is amazing on a lot of levels. We think that it is great this growing cadre of guys think that they can outdo each other. Without this type of rivalry, competition, etc, stuff gets boring. We’re going to need an industrial vat of popcorn to follow how this whole deal will play out over the course of the next nine months. As usual, we’re going to do our best to follow each of the contenders as closely as we can to see what’s what, who is where, and how fast everyone is going.

Of course there’s always Jeff Lutz to mention. He’s said a couple of times that his yellow Camaro Pro Mod would make a heck of a street car and it went 5.78 at Vegas….will there be a fourth man in the ring for this Battle Royale soon? Is anyone else out there building a car that will take on the likes of these three (and possibly four) heavy hitters?

Like they used to say on TV, come back next week….same bat time….same bat channel!

After a couple of months of behind the scenes work, and now the dust has settled in the 2014 street legal racing scene, Andy Frost and Red Victor 1 Racing team are now ready to unveil their plans for the foreseeable future in the street legal racing circus.

We will be upgrading RV3’s powertrain to run in the 5 second zone, and to bring back the street legal record back across the Atlantic, where it resided for 2 ½ years!

Having watched the huge progress in street legal racing that we started back back in 2010, we’re happy that finally there are people who have joined us in the street legal car revolution. That is what makes it exciting to be a part of it, and drives us on to new heights!

So, the car itself has plenty of potential left, as we didn’t really scratch the surface of it’s chassis tune up (or engine tune up). Track time and weather in this area of the world played it’s part in that! We had less runs in one year than our competitors had in one meeting!!

What we are lacking for the job in hand, due to the class restrictions we were racing in, is power. This will be now be taken care of in certain areas, namely, the top end of the engine, the turbo size, and transmission.

Engine size will stay the same at 540ci, and so will the New Century block, Diamond Pistons, Winberg crank, GRP rods, Bullet/Morris cam and Jesel lifters.

We will also have some new MoTeC equipment to add to the M800/CDL dash combo, namely a MoTeC PDM 30 and MoTeC keypad, to help with the street side, which will allow us to change from pump gas to methanol with a press of a button.

Transmission wise we will be changing over to a Reid cased TH400, complete with a Browell 6.3 bellhousing, The trans will be built by Frosty, with Hutch transmissions overseeing the build, and supplying the parts, We always wanted to use this trans combo, but the FIA rules prohibited it when the car was being built. Now we are running “outlaw” it is the trans of (our) choice. The bolt together converter will also be our choice..

The engine will again be build by Marc at Lamude racing engines. The same guy who built our record setting engine for the last couple of years, and tuning duties again will be handled by the same world famous Shane Tecklenburg, who is no stranger to setting records around the world!

Once the upgrades are done (around Aug/Sept 2015) we plan on shaking the car down at Santa Pod Raceway in England, driving the car around the countryside to test all the new systems, then shipping the car to a sunnier destination to test the upgrades to the full. From that we will see what transpires…..

One of the main reasons we are able to do this is because of our new sponsor the “Red Victor 5 second club”. We formed the club a short while ago, and after 1 month we have 120 dedicated club members who are supporting our “quest for the 5’s, and the street legal record”. They more than anyone are driving the team towards new heights, and all the RV1 racing team thank them for their unswerving support, along with our loyal sponsors and fans.

Our new page, which will be live on Monday. https://www.facebook.com/redvictor5secondclub 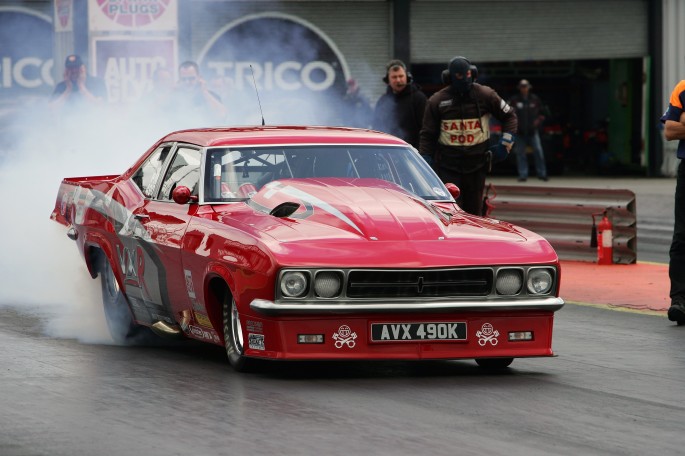 Question Of The Day: What Is The Most Pointless Option Ever Installed In A Car? Ride In The Cockpit Of The 10th Shelby Cobra Ever Built As It Rips, Roars, And Screams Around Laguna Seca Mazda Raceway

35 thoughts on “…..And Then There Were Three – Andy Frost Releases Plans For His Red Victor And His Hopes To Grab The Record Back”